On a sunny Tuesday morning, the sunny interior of the Metairie Humana Guidance Center quickly filled with senior citizens chatting and helping themselves to coffee. Jeff Fernandez, president of Humana operations in the Gulf South, explained that they had arrived early for the center’s weekly cooking class, “Healthy Cooking with Chef Nino.” 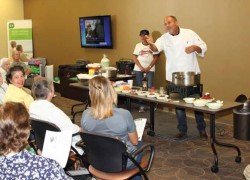 When Nino — local culinary tycoon Neil Thibodaux — bounced into the Guidance Center, it quickly became clear why his class is the most popular activity offered there. Taking his place behind a table laden with raw ingredients, Nino leaned forward, high-fiving old folks and cracking self-deprecating jokes as he cooked. “I’ve lost 30 pounds since January,” he told his attentive audience, advising them to replace salt with herbs.

The Mediterranean diet-focused class is about living well, said Fernandez, a Metairie native who began working at Humana in 2005. Hidden in a nondescript block of Veterans Boulevard, the Guidance Center is a “nontraditional insurance company service,” he said. Here, Humana policyholders can take advantage of a packed schedule of exercise classes, art workshops, movie matinees and cooking tutorials. Opened in November 2012, the New Orleans center was the company’s 23rd nationwide. It employs a full-time customer service representative to provide information and assistance to visitors.

The center’s offerings help Humana policyholders take “baby steps to change,” including exercising and trying new cooking methods, explained Fernandez. “We’re trying to get them active and building friendships.” Many activities are also open to non-members, Fernandez said, citing the center’s growing canasta club, coffee socials and walking program, among others. If visitors and prospective health benefits members just want to stop by to ask a question about Humana policies, they can do that, too.

After introducing Fernandez, Chef Nino called on a man in the front row with his hand raised. “This class has changed my life,” he said, looking at Fernandez. “I just feel better.” Other seniors sitting in the audience nodded and clapped. “How many of you have started exercising since you started coming here?” Nino asked, and hands all over the room went up.

The Humana Guidance Center has been so successful that less than a year after its opening, Fernandez is considering moving to a larger location. “We’re pulling attendees from all over,” he said. “They like the location, but we’re growing fast!”