Brave to the Bone: Jenna Cavalero 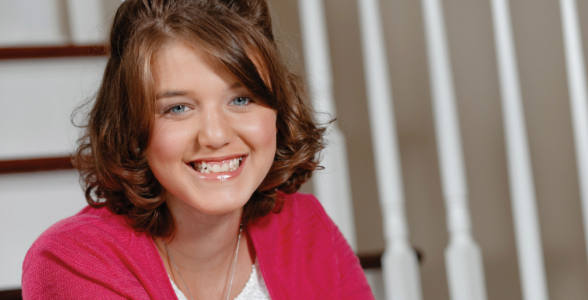 Lounging on her living room couch on a Saturday morning, Jenna Cavalero looked like your average 14-year-old girl enjoying a beautiful weekend. But the scars that run down her left leg speak to the challenges the past three years have dealt Jenna and her family.

While visiting an orthopedist for a broken finger a couple of years ago, Jenna mentioned knee problems that had been bothering her. A year after experiencing what felt like serious growing pains, her leg was still hurting.

After the specialist performed an X-ray and referred them to Children’s Hospital, the Cavaleros remained in the dark. “We didn’t know what it was right away,” said Jenna’s mother, Beth Cavalero. “It was either a bone infection or a tumor.” They prayed that it was an infection, but in October 2011, a biopsy revealed osteosarcoma in Jenna’s femur.

Jenna began her grueling treatment immediately — 10 rounds of chemotherapy, followed by major surgery to replace the cancerous part of her bone with a titanium rod, followed by 19 more rounds of chemo. While receiving chemo, Jenna had to spent up to 18 straight days in the hospital; her older brother, James, would cheer her up by putting on hats from Jenna’s growing collection. The family made the most of holidays and special days in the hospital, decorating Jenna’s room with signs and streamers.

Asked how many surgeries she’s undergone, Jenna had to think for a moment. “Six? No, seven,” she said.
Jenna finally completed her last round of chemotherapy in July 2012. “I was happy to be finished,” she said, “but I still felt — not bad, but I couldn’t do a lot.” She was on crutches for almost a year following the end of her treatment. The crutches are glittery, pink, and covered with stickers. Showing them off, Jenna pointed to the spot where Will Ferrell signed one.

Having spent close to nine months in and out of the hospital, Jenna was determined to get back to her life. Last fall, she eagerly anticipated her school’s homecoming dance, scheduled just two days after the one-year anniversary of her diagnosis. But as she and her friends took pictures together before the dance, the rod in Jenna’s leg suddenly snapped. The Cavaleros learned later that instead of growing around the bone and strengthening it, her prosthesis had been crumbling her femur.

Though Jenna was in pain, she begged her mom to let her go to the dance anyway. Since her daughter could still stand, and doctors wouldn’t be able to see her until later, Beth reluctantly agreed. “In hindsight, I’m glad I didn’t know [the rod had snapped] because I probably wouldn’t have let her go, and she had a great time,” said Beth.
Thankfully, Jenna’s second prosthesis-insertion surgery involved a shorter recovery time and fewer complications. Though she wasn’t happy about Jenna having to undergo another surgery, “The system that she has in her leg now is much better,” Beth noted.

At Jenna’s request, the Cavaleros documented her journey in pictures, from her October 2011 diagnosis until she came home the following July. They have almost a thousand pictures, carefully organized in plastic Ziplocs. Jenna is smiling in every one.

Once cured, Jenna thought she’d be glad never to return to Children’s Hospital. But after making friends with her nurses and other pediatric cancer patients, she visits them as much as possible. “I don’t want to forget all of this, because this is what made me who I am,” she said. Last year at school, she was honored with the St. Therese of Lisieux award, given to a student who goes out of her way to help others.

Having just entered ninth grade, Jenna serves on the student council. She likes to read and travel; though she’s only been to the beach in Florida so far, she’s looking forward to visiting lots of new places. She has also founded a group at Mount Carmel called Teens for Life, which aims to pay Saturday visits to kids stuck in the hospital. “This is her way of giving back,” said Beth. “She has friends still there, still battling.”

Although Jenna still has to avoid high-impact physical activity, she knows her own abilities and limitations. “Don’t tell me I can’t do something,” she said. “I know if I can or can’t do it.”