ARTIST SPOTLIGHT: CHRIS ROBERTS-ANTIEAU
Visual artist Chris Roberts-Antieau doesn’t shy from the macabre. Her latest piece, “Murder House,” was inspired by the 1959 Clutter murders in Kansas, detailed by Truman Capote in his novel “In Cold Blood.” 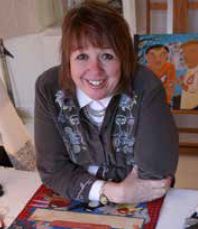 Using crime scene photographs and her own imagination, Roberts-Antieau painstakingly created a dollhouse of the home where the murders took place, complete with bloody clay Clutter family members. The artist’s goal was to explore the modern desensitization to violence — but she can’t deny she had some fun with it, too. “I have a wacky sense of humor,” said Roberts-Antieau, who hails from tiny Manchester, Michigan. “I think everything is funny.”

Self-taught Roberts-Antieau is best known for her quirky, stitched “fabric paintings,” depicting subject matter from nature and deep space to monkey astronauts and uncomfortable social situations. She writes and draws ideas constantly in a small notebook. Her work, which can only be characterized by the euphoria it inspires, comes from a subconscious place, exploring the “dark and light” sides of her personality, Roberts-Antieau said. A recent series combining these two aspects, “Tragic Snow Globes,” turns the generally staid realm of snow globes on its head, with bright handmade globes featuring violent scenes of murders just committed and accidents in progress.

“You can’t go into making art with rules,” said Roberts-Antieau, who was told in her first (and only) drawing class that she should not pursue an art career. Her work is now featured in dozens of galleries and museums across the country, and Bill Clinton, Oprah and John Waters number among her collectors. Three years ago, Roberts-Antieau’s New Orleans pop-up art show turned into a permanent gallery showcasing her and other artists; on Dirty Linen Night this year, Antieau Gallery became an artist-only space.

During and after her treatment for breast cancer in 2009, Roberts-Antieau began to push deeper into a place of introspection, addressing themes of personal mortality and interconnectedness. Animals have always featured prominently in her work: using a technique known as thread painting, she created embroidered cloth masks for two taxidermied deer heads, which face each other across her Royal Street gallery. The masks feature intricate, layered images of birds, flowers, insects and plants: what each deer “saw and would remember.” Roberts-Antieau sees the pieces as bringing the taxidermy back to life.

“We’re all made of the same substance,” she said. “What stars are made of.”

Visit Antieau Gallery at 927 Royal Street and online at antieaugallery.com
MUSIC SPOTLIGHT: THIBODEAUX SCHOOL OF MUSIC
Last month, Thibodeaux School of Music celebrated its one-year anniversary — no thanks to Hurricane Isaac, which delayed the school’s summer 2012 opening. Located just off the lively Freret Street corridor uptown, the school offers music education for all ages in both class and private lesson settings.

With lessons and performance opportunities for all instruments, from bass to brass and piano to piccolo, Thibodeaux School of Music’s teaching staff includes six accomplished local musicians. Founders Paul and Madeline Thibodeaux, musicians and teachers themselves, say the school is a dream come true. “We’re very community-oriented,” said Paul, a drummer. “We would love to be the local music lesson school.” So far, so good: Thibodeaux School of Music students have ranged in age from six weeks to mid-70s.

In its Kindermusik program, the school focuses on music’s developmental benefits. Children from ages zero to six strengthen motor, math and language skills through musical exercises and play. “The point is not to create child musicians, but musical children,” explained Madeline, who received her bachelor’s in music education from Loyola University New Orleans. “With a general understanding and appreciation of music, they become well-rounded adults and develop the out-of-the-box thinking skills to solve the problems we face in the world today.”

Recognizing that Freret Street’s growing retail and restaurant scene can be exclusive to the neighborhood’s own low-income residents, Paul Thibodeaux is in the process of organizing a free-of-charge community drum group for kids. When the school expands, the Thibodeauxs plan to offer theory classes, combo playing opportunities, and community bands divided not by age, but talent. In addition, a Thibodeaux School of Music summer camp is in the works.

Thibodeaux School of Music is located just off Freret Street at 2436 Valence Street, and is open from 9 am to 8 pm, Tuesday through Saturday. Learn more and enroll at thibodeauxschoolofmusic.com
ORGANIZATION SPOTLIGHT: ARTIST INC.
Short for Arts International Connection, Artist Inc. is a local nonprofit helping connect artists with resources to further their careers. If you haven’t heard of it, don’t be surprised — though it was founded in 2007, the organization is just starting to emerge from under the radar.

Founder Reese Johanson, a performing artist who works in physical and dance theater, is thrilled that Artist Inc. now has the strong foundation it needs to pursue its mission. “I’m ambitious about the support I want to give,” said Johanson. Hosting and supporting multiple art events every month, the nonprofit relies on “internally created funding,” and has gotten almost every grant it’s applied for. Artist James Michalopoulos, Johanson’s husband, donates the organization’s vast Marigny warehouse space.

Here and at other New Orleans venues, Art Klub, an Artist Inc. group encouraging local artists and art lovers to collaborate and get to know each other, hosts weekly events. Think art salons, film screenings, literary readings and even a popular “Silent Disco” dance party, which the Klub threw every week in September. Art Klub members can also take advantage of Artist Inc. rehearsal space and discounted tickets to the organization’s events.

The goal of Art Klub and Artist Inc. is to “challenge people to exercise different muscles,” Johanson said, citing multidisciplinary performances that came about as a result of Art Klub members working together. The organization has a diverse schedule of upcoming events, including Fringe Fest shows, theater performances and fundraisers.

The most popular Artist Inc. event is BYOBed, an all-night sleepover coming up on October 19, when the warehouse will open to nocturnal art, music and performance lovers. Attendees can rent a bed space and pitch a tent or mattress, or simply buy a ticket. BYOBed’s art installations, concerts, films and theater shows run nonstop all night, with a special breakfast treat for those who can stay awake till dawn. The event is an “explosion” of art, entertainment and collaboration, said Johanson.

Annual Art Klub membership is $35, with a one-month trial membership available for $5. Learn more about Artist Inc. at artistinc.org

Broadway at NOCCA Features Jane Krakowski
On October 7, Jane Krakowski will perform with Seth Rudetsky in the Broadway at NOCCA series. Krakowski, though best known for her Emmy-nominated work in “30 Rock” and “Ally McBeal,” is also an accomplished stage performer who made her Broadway debut in her teens, received a 1990 Tony nomination for “Grand Hotel” and won for “Nine” in 2003.

Recently, I spoke with her about her New Orleans appearance:

A: Seth is hilarious and incredibly knowledgeable about musical theater. Also, [all the series’ guests] have known him a very long time. He knows so much about us and our work. It’s like “Inside the Actor’s Studio” for musical theater.

I find his shows quite fun because you never know what’s going to happen. You tell stories you never thought you’d tell. We’ll have a song list, but the evening could go any whichway.

Q: How did theater prepare you for television? Have TV and film helped you in theater?

A: Theater prepares you for all of the mediums because of the discipline. You need to know your lines to be out there performing every night at 8:00. On “30 Rock” and “Ally McBeal” it was quite fun to fuse my Broadway background into my characters. In a very comedic way, I’ve gotten to sing and present my theater side on TV.

My TV career has helped onstage because, to be blunt, it sells tickets. Also, with “30 Rock,” I worked with such talented, creative, smart comedians who were also trained in stage work. That helped when we did “30 Rock” live twice. It was terrifying and exhilarating, but we were the right group to do it because of our backgrounds.

Q: What is the greatest challenge and the biggest pleasure of doing concerts?

A: Initially I was trepidatious because I was used to playing characters. In concert, you present yourself. That was terrifying! But the intimacy and immediacy make those evenings special. That is why the audience comes. Once I realized that, it made it a lot easier and so much fun for me.

A: I loved it! The whole group became New Orleans converts. New Orleans is so individual. When you’re there, you know where you are. I love that and the vibe. I’m really happy to be coming back.

1.16K
previous Eric Heatherly: Got Your Goat
next Arts: December 2013