Home SPORTS The Center of It All
SPORTS
September 30, 2013 Paul Wegmann 0

The Center of It All

The Art of Communication in the Best Offense in Football 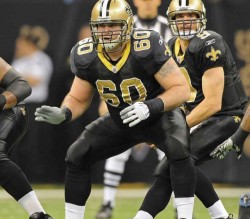 It has been said that communication is the real work of leadership. It has also been said that miscommunication lies at the heart of all discord. The New Orleans Saints have become known for their offensive success, producing a top-five offense year in, year out. At the center of it all is the linchpin who touches the ball first on every play from scrimmage. No, it’s not Drew Brees, whose accomplishments are legendary, but the man who delivers the rock: center Brian de la Puente.

De la Puente began his career as an undrafted free agent out of Cal in 2008. He took persistent strides with four different teams before earning his way onto the Saints as a practice squad signee in 2010. At the beginning of 2011, he moved into a reserve role on the roster, and by October of that year, through a combination of fate and need, he was thrust into the mix as a starter. He quickly proved to be yet another link in the Saints’ coaches’ uncanny ability to find offensive stars in the firmament of players who go underdrafted and undervalued by the rest of the league.

Today, de la Puente is regarded as one of the best centers in the league. The Saints offense is built on cadence, timing and rhythm in combination with trust and communication and, in de la Puente, its architects found the rare athlete qualified to fit into that construct. De la Puente explained, “Communication is one of the more important parts of being a center — being able to quickly diagnose what we need to do and how we need to do it. Every great center has to have that with his line and his quarterback.” This feeds into and facilitates perhaps the most up-tempo system in the league. “We control where the huddle’s set, how quickly we get to the line and the tempo; these are the things that you can control,” said de la Puente. “It’s not about how big or fast you are, it’s about effort, and that’s something I can control — how quickly we get up to the ball. At the end of the day, we can control how hard we want to play. Communication, control and effort are all things that make a good center.”

Most centers are charged with the responsibility of calling out signals to the line, but de la Puente is in the uncommon position of playing with one of the best play-callers in the sport. As he explained: “We’re lucky enough to have a quarterback that does it also, so that when he validates my call and lets us know we’re right, it confirms that we’re all on the same page. He knows where we are all going and where his protection is. Kudos to him for wanting to know the whole framework and structure of the play.”

De la Puente’s emergence over the last three years is obviously a testament to his physical skills, but the reason for his success here is about much more. “I prepared every week like I was starting. I got into the habit of understanding the game plan and knowing how to execute it without getting the reps, so that when I did get my opportunity, I was ready for it. I have continued that preparation. It makes game day that much easier. You put the work in early and it makes Sundays fun.”

The results show. Brees almost never gets pressure up the middle and the Saints rely heavily on the middle of their line in the run game. In 2012, according to Football Outsiders, the Saints ranked seventh in pass protection, but they were also successful on 71% of their “power” runs (on third or fourth down with two yards or less to go, gaining a first down or touchdown and runs on first-and-goal or second-and-goal from the two-yard line or closer gaining TDs). They were third best in the league and overall ran the ball down the middle 61% of the time, sixth most in the league.

De la Puente, whose youngest sister is hard of hearing, has brought his high level of dedication to helping deaf awareness, including supporting the Starkey Hearing Foundation’s project to distribute 300 free custom hearing aids in New Orleans during Super Bowl weekend and visiting the Louisiana School for the Deaf in Baton Rouge. “Deafness and the hearing impairment field is near and dear to my heart,” he said. “If you can bring a smile to kids’ faces, not only does it make their day, it makes my day.” The foundation has committed to providing 100,000 hearing aids to the needy and 1,000,000 over the next decade. “The Starkey Foundation gives the gift of hearing all over the world,” said de la Puente. “It’s very special, and I can’t wait to go on one of their missions. Being an NFL player gives me a unique opportunity to take part in charity work, and I plan to take full advantage of it. It’s truly rewarding to help people; it makes you feel good and it makes them feel good. At the end of the day, it’s all about community. I enjoy that.”
*************
Favorite Restaurants: Mr. John’s, Lüke, Capdeville
De la Puente has also become a sturdy New Orleanian. “I love being here,” he gushed. “I love this city. It not only has great food, it has great culture and great people. Every time I have visitors from out of town, they’re impressed by the hospitality because everybody is so nice. It’s refreshing and humbling to be a part of a city that truly loves its team, and the team loves them right back.”

134
previous Malcolm Jenkins: Winning Through Versatility
next Puntology: Tommy Morstead and the Science of Punting