Nicolas Bazan, Director of the Neuroscience Center of Excellence at the LSU Health Sciences Center, is interested in fundamentals — specifically, the brain’s basic mechanics of cell survival. 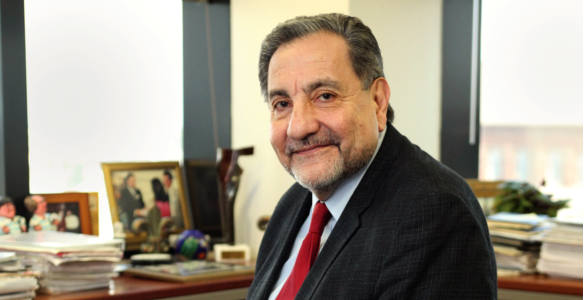 “The only way to conquer brain diseases is to understand the functions of the brain,” he said.

Born in Los Sarmientos, Tucuman, Argentina, Bazan has had a personal interest in curing neurological disease since boyhood, when he saw his aunt suffer a seizure as they walked to a music lesson. By age 26, he was faculty at the University of Toronto’s Clarke Institute of Psychiatry, where he performed groundbreaking studies on the brain’s response to experimental seizures and ischemia.

Bazan joined the faculty of the LSU Health Sciences Center in 1981, later establishing and heading the Neuroscience Center of Excellence. In addition to founding the first biotech company in New Orleans (now licensed to a California company for clinical development), Bazan’s awards and accolades include election to the Royal Academy of Medicine in Spain, the Javits Neuroscience Investigator Award from the National Institute of Neurological Diseases and Stroke and the Alkmeon International Prize.

Of his myriad accomplishments, Bazan lists his five children as “perhaps the best. Of course, the co-author of that paper is my wife,” he laughed.

Bazan prefers being in the lab to doing administrative work. Right now, his main interest lies in investigating retinal diseases that lead to blindness. “If we understand how nature makes our cells survive, we will be able to mimic that,” he said. “No neurological diseases have been cured yet. There are treatments, but no cures.”

In his very first lab in the ‘70s, Bazan demonstrated that brain ischemia, or insufficient blood flow, triggers the release of free essential fatty acids — a finding now referred to as the Bazan Effect. In 2004, Bazan and colleagues at Harvard Medical School discovered neuroprotectin D1, a lipid molecule manufactured in the eye and brain when there is a threat of disease.

Not content with limiting his energy to science, Bazan is also deeply involved in the arts. “I am in love with jazz,” he said, explaining his decision to buy and restore the crumbling Little Gem Saloon on South Rampart Street in the CBD. “I wanted to spread jazz farther into the city.” Bazan also sits on the board of the New Orleans Opera and a “zillion other foundations — mostly arts and music-related.”

He has written seven novels, one of which is being made into a major motion picture about music and Alzheimer’s disease. “Una Vida,” a “fable of music and the mind,” follows neuroscientist Alvaro Cruz through the streets of New Orleans as he searches for a mysterious jazz musician; it also shares a name with one of Bazan’s five wines, a pinot noir produced in Oregon (did we mention he’s also a winemaker?). Naturally, Bazan co-wrote the screenplay for the film version of “Una Vida,” and is co-producing the movie.

Both the book and the film are dedicated to “all the minds silenced by Alzheimer’s,” said Bazan. “I wanted to convey a message of hope.”