When we talk about healthcare in America, we’re normally talking about things like doctor visits, prescriptions, emergency services, out-of-pocket costs and insurance. 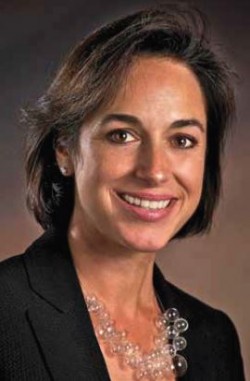 But according to Dr. Karen DeSalvo, these standard issues are just a fraction of the variables that bear on a person’s health.

“How healthy someone is depends on a number of factors. Some of that has to do with access to care, but access really represents only about 10% of the picture, and genetics are another factor. The rest has to do with where you live, learn, work and play,” she said.

For the past two and a half years, DeSalvo has been the health commissioner for the city of New Orleans, as well as Mayor Landrieu’s city health policy advisor. Along with access issues, she’s been thinking a lot about where our citizens live, work and play. DeSalvo has made it her goal to restructure the city’s health department and to give it a modern focus.

“Instead of just treating diabetes in a clinical setting, we’re looking at how to prevent it,” she said. “Or take an issue like childhood obesity. A more traditional approach would entail setting up sessions that teach parents and children what to eat. The more modern approach is to build bike lanes, increase the availability of green space and work with the city recreation department on programming.”

Of the many things that influence health, behavioral choices like exercise are important, so the city is enacting initiatives that make it easier for the population to make healthy choices. Fit NOLA is a key component of this goal.

“Fit NOLA is the city’s effort to improve physical fitness for everyone, for people of all ages. It’s a set of strategies and efforts that includes everything from encouraging healthy foods at community events to fixing up parks. Mayor Landrieu wants New Orleans to become one of the country’s top 10 fit cities by 2018,” DeSalvo said, referring to the city’s tricentennial.

Another priority is public safety and murder reduction. When children live in a neighborhood where bullets are flying and parks are dangerous, they’re not going to play outside. Mayor Landrieu’s NOLA FOR LIFE campaign, aimed at reducing murders, is also tied into DeSalvo’s work as health commissioner.

Many community members have also expressed concerns about the prevalence of vermin, mold and lead paint, which fall under the rubric of environmental health. Currently, the city doesn’t have a unified place for handling these matters, but creating one is on the horizon for DeSalvo’s department. Other key priorities include emergency preparedness and what DeSalvo calls family health, which encompasses issues like pre-natal care, teen pregnancy and parenting skills. At first glance, parenting might not seem like a health issue, but ultimately it is. DeSalvo has also played a leading role in the development of a new hospital in New Orleans East.

“What we’re trying to do is adopt a ‘Health in All Policies’ mindset,” she said. “That means we are thinking broadly about social issues. We want to consider how education policy or an infrastructure project will affect the community’s health.” She cites the Lafitte Greenway Project as one example. The city health department recently received a grant from an organization called the National Association of County & City Health Officials to conduct a Health in All Policies pilot program in Central City.

Both of DeSalvo’s parents are New Orleans natives, but her mother raised her in Austin, Texas. As the child of a single parent, DeSalvo often availed herself to the after-school programs of the Austin Recreation Department. Naturally, she’s a big proponent of NORDC today.

DeSalvo studied political science and biology at Suffolk University in Boston while working part-time jobs in public health to help put her through school. She returned down South to enroll in medical school at Tulane. In addition to her medical degree in internal medicine, she also earned a Master of Public Health. Today, DeSalvo is an Associate Professor of Medicine at the university, although she’s on leave while working for the city.

In the early part of her medical career, DeSalvo trained and saw patients at Charity hospital for years, but always thought there had to be a better way to improve patients health by offering primary care in neighborhoods.

“Charity was not accessible for patients; it was more designed around doctors,” she said. “If you missed your appointment for whatever reason, it would be an entire year until you could get back in the clinic. So many patients would do the logical thing and go to the ER. People were not getting continuity of care there.”

Neighborhood community clinics have stepped into one of the the roles once served by Charity, which never returned after Katrina, and DeSalvo has worked on policy issues related to these clinics. Still, like many others, she’d like to see the abandoned building returned to commerce. There’s a soft spot for the place in her heart. After all, it’s where she began her career and where she fell in love with the fellow resident who became her husband.

2.29K
previous An Interview with José Suquet, CEO of Pan-American Life Insurance Group
next Movers, Shakers & Tastemakers: Young Professionals Get Their Philanthropy On