Puntology: Tommy Morstead and the Science of Punting

If a good offense is the best defense, then punting may be the most important play in football. Under the rules of the game, the punt is an offensive play, yet a punter can greatly improve a team’s defense by sending the opposing team back any given number of yards with a single play. 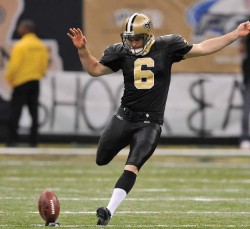 Ten to 30 yards are worth their weight in gold. That’s what a good punter can deliver.

In 2009, the Saints’ ability to control the game of field position improved dramatically when they drafted Tommy Morstead out of SMU (where he was coached by the legendary Frank Gansz, described by Dick Vermeil as “the best special teams coach ever”). This was best shown during the 2009 NFC Championships, when Morstead repeatedly drove the Minnesota Vikings back in a game that would ultimately be decided by a field goal. In Super Bowl XLIV, Morstead surgically aimed the “ambush” onside kick that resonated like a knockdown punch in a championship fight on the way to victory.

Morstead explains his role in helping the Saints defense: “We’re an aggressive team in all areas — offense, defense and special teams. Coach Payton always talks about playing complementary football. Special teams is a way that the other team has a chance to score while I’m on the field, so our job is to find a way to prevent that by denying them the chance to find another way to beat us.”

This philosophy of being more aggressive than the opponent rules for Morstead. He has held the line almost as a guarantee on virtually every play he has been a part of, not allowing a punt return score since the end of the 2009 season (through at least the first quarter of 2013). As a kickoff specialist, he has set NFL records for touchbacks in a single game and in a season. Only one touchdown has ever been scored off one of his kickoffs.

Of course, the primary goal for any punter is net punting average. Morstead has been superlative in that regard, finishing first and second the last two years, respectively. He came within one game of breaking the league record last year. He also holds all-time Saints records for single season gross and net punting averages.

Punting has always been an essential element of football, though it has developed as punters moved away from maneuvers such as the coffin-corner kick near the opponent’s end zone toward the end-over-end Aussie kick, which is even better at controlling distance and creating a difficult spin for returners. Morstead has kept the underappreciated science of field kicking alive by employing the arsenal of directional kicks he has at his disposal. “A lot of teams are directionally better than ever, and we’re one of them,” he said. “If you can ‘directional’ well and get the ball out of bounds, it’s a great way to prevent the other team from touching the ball.

Ironically, in this era of passing and offensive dominance, Morstead is in the vanguard of a golden age of punting as all of the top net punting averages have come in the last five years. He, along with other established stars like Andy Lee and Shane Lechler and newcomers like Johnny Hekker of St. Louis, demonstrate the growing talent base at the position. As Morstead put it: “You’re finding better and better athletes at the kicking and punting position. You’re going to see guys do some pretty amazing stuff.”

Morstead’s dedication extends beyond football. Last March, he became a notable fixture at the St. Baldrick’s Day fundraiser at Finn McCool’s Irish Pub in Mid-City. After growing his hair long for three years, he shaved it all off at once, encouraging over a hundred others to follow his lead. He helped raise over $130,000 in the process (double the amount raised the year before). The hair itself was donated to Wigs for Kids, a national charity that provides hair replacement systems to children who have lost their hair due to medical treatments and issues, such as chemotherapy, radiation therapy, burns, alopecia and trichotillomania. In addition, Morstead has sought to contribute to the communities of the Gulf South through his foundation, What You Give Will Grow (whatyougivewillgrow.com), which provides care and support to cancer patients as well as to children’s cancer initiatives.

Can you share any nutritional or workout advice from your training in the off-season or while at home?
“Do research. People have these miracle answers, but you have to work at it, you have to be dedicated and you have to figure out what works for you. No matter how much I eat the same as Darren Sproles or Zach Strief, we’re never going to have the same body type. We’re not going to weigh the same and we’re not going to have the same composition. Everybody’s different, and you just have to hold yourself accountable.”

973
previous The Center of It All
next Trust Rewarded