The popular and romantic Cafe Amelie has expanded. 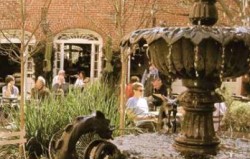 Just around the corner on Dumaine and Royal, the new Petite Amelie specializes in “cuisine rapide” for both breakfast and lunch, with a menu that features items like fresh pastries, savory and sweet pies, smoked salmon and bagels, panini, “waffle-melts,” soups, salads and gourmet sandwiches, in addition to a novel “fresh foods” market. cafeamelie.com

Michael Gulotta has left his position as chef de cuisine at Restaurant August. His spot was filled by Chef Todd Pulsinelli, a longtime Besh cook who moved over from Besh Steakhouse inside Harrah’s Casino. Meanwhile, Gulotta plans to open Mopho Mid-City, a Southeast Asian-style restaurant near Delgado Community College with his brother Jeff. They hope to have the new restaurant open this winter. mophomidcity.com

The talented Ricky Cheramie has left The Bombay Club, only to be named executive chef at the firehouse-turned-restaurant Dijon on Annunciation Street. Owner Kurt Brodtmann has struck gold again with acclaimed local chef Cheramie, who grew up in Lafourche Parish hunting and fishing the bayous and has worked in the city’s top kitchens, from K-Paul’s and Emeril’s to Commander’s Palace. Dijon’s menu will remain focused on contemporary Creole/French cuisine with a continued emphasis on seasonal, local ingredients. dijonnola.com

Chef Robert Bruce, who has worked in kitchens all over New Orleans, including Upperline, Maylie’s Restaurant, Commander’s Palace, Ruth’s Chris and Emeril’s, has left Little Gem Saloon to take over the kitchen at Mr. John’s Steakhouse. Knowing the local fanbase for the popular steakhouse, Bruce plans to keep the classic menu intact and enjoy a position that allows him more leisure time with his wife and family. mrjohnssteakhouse.com

There’s a new pop-up in town: Super Moon Wokery serves Asian street food in front of Pal’s Lounge in Mid-City on Sunday nights. Chef Grantley Rushing of Cafe Degas and Alex Siler are offering “simple stir-fry” with an array of Asian-inspired cuisine on the menu. Not only is Rushing having fun managing the complexities of Asian-style cooking on the street (literally), but the tongue-in-cheek dish names on the menu display another level of silliness, with items like “P-Nut Sauced Chicken” over “Noodz” and “My Best Fried’s Rice (Director’s Cut) with shrimp, eggs and vaggies.”