The incomparable Oscar-winner, Melissa Leo, does justice for post-Katrina New Orleans in her role as civil-rights attorney, Toni Bernette, in HBO’s “Treme” as the final season of the Peabody Award-winning drama series enters the home stretch. 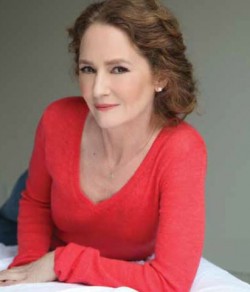 Through her thoughtful acting as one of Hollywood’s most consummate professionals, Melissa Leo has left an indelible impression on the city of New Orleans. As determined civil-rights attorney Antoinette “Toni” Bernette on “Treme,” Leo brings an uncanny honesty and layers of fascinating human complexity to her lionhearted character of a woman on a mission to uncover police corruption. Leo hits close to home with her authentic performances, which is something she strives to accomplish with every role she undertakes.

Leo’s impressive efforts have been recognized and rewarded. She’s beloved for many of her performances, such as Detective Kay Howard on “Homicide: Life on the Street,” and she’s earned a number of coveted nominations and awards, such as an Academy Award for Best Supporting Actress in “The Fighter,” an Oscar nomination for Best Actress in “Frozen River” and an Emmy Award for Outstanding Guest Actress in a Comedy in “Louie” on FX Networks, where she knocked out funny ladies, such as Kristen Wigg and Melissa McCarthy, with her comic performance.

And while “Treme” prepares to meet its denouement with an abbreviated five-episode season, starting Dec. 1 on HBO, Leo’s career roars onward, forward and upward as she continues to be in demand as a go-to actress guaranteed to rise to any occasion presented to her. Leo’s recent films include “Flight,” with Denzel Washington; “Oblivion,” opposite Morgan Freeman and Tom Cruise; and “Olympus Has Fallen,” directed by Antoine Fuqua, and starring Freeman and Aaron Eckhart.

Next up, Leo will star in the film “The Angriest Man in Brooklyn,” with Robin Williams; in “Wayward Pines,” a Fox Broadcasting Company event series set for next summer; and “The Equalizer,” later in 2014, again working with both Washington and Fuqua. New Orleans Living had the honor of interviewing Leo about her time spent in New Orleans while working on “Treme.” Her eloquence; her hearty, good-natured laughs; and, best of all, the ecstatic “Who Dat!” the high-caliber actress couldn’t resist belting out, are all a testament to her unique, soulful and independent ways that have blended resplendently right into the tapestry of New Orleans.

Hi Melissa! It was great to hear that “Treme” was renewed for a half season, but it’s bittersweet that the end draws nigh. “Treme” really has been fabulous for this city! David Simon, and the cast and crew, did a super job of portraying the city as it actually is versus some bizarre Hollywood concept of what New Orleans is.
Oh I really like hearing that, Christine. Thank you! I know a great intention for me was to speak for [this] city, and, if that’s being done in a good way, then that really makes me proud. I know we were all a little bit nervous coming down because y’all have been depicted so many times, and, I don’t think you ever felt that it got nailed, which is easy to understand now that I know New Orleans as well as I do—you are a hard lot to capture! [Laughs]

True dat! How did you prepare yourself to get into the head of your character in “Treme,” civil-rights attorney Toni Bernette?
That first year we were down there, I didn’t leave New Orleans very much. All of the characters in “Treme” had a basis in reality, and the character was largely based on attorney Mary Howell, who is a local legend, and others of her comrades in arms there. Mary was their research go-to person, and they opened up a line of communication between Mary Howell and myself. So that was one of the tangible real ways the connection was made so I could understand the complexities of various situations I’d have to play, and Mary Howell was endlessly helpful. Part of my job as an [actress] is to find specifics—it’s all pretend, but the more real you can pretend depends on the amount of reality around you. How could we have ever shot the show in Los Angeles and gotten the kind of textures that we got? Literally, the city of New Orleans was aiding and abetting our hard work.

New Orleans itself is like a character in the show, like New York is in “Sex and the City.” When “Treme” debuted, it resonated with us in regards to our own lives after Katrina.
I am so glad to hear that! One comment I received from a woman who stayed during the storm and helped afterwards, was that she sat down and watched the show—and had memories from her own life that she could not recount because of the horror and the way human beings can block memories—and she wept as she told me that she remembered things that she had done for others after the storm because she was watching the show. For me, that’s what drama is—to see ourselves reflected, and, by that way, grow as human beings. That we could trigger memory in her —from a TV show—that’s like therapy! You relive the nightmare, but you’re safe because the nightmare is over. That’s where the healing happens, and the bottom line is that is why I do what I do!

Do you stay in character for the duration of filming a project?
The short answer is yes; I am a method actor. I don’t really take it to the extreme and pull the character into my life. But I find if I leave my instrument open to be informed by the character, then, yes, she stays with me. And yes, all the years when you see Toni Bernette after the death of Creighton [John Goodman], trying to get on with her life and take care of the grief of her daughter, Sofia [India Ennenga], all the while, although she hardly talks about it, she is grieving the death of her amazing husband. Even though it’s not written in the episode, I’m going to keep it alive because it’s part of her reality.

Toni Bernette’s perseverance is her most admirable quality. Even if she or her daughter were threatened, she remained relentless in her investigation into police corruption.
I completely agree with you on that, and that was one of the great joys of playing her. She is really a woman with a purpose, and she lives up to her word. Others are more important to Toni Bernette than she is to herself. And the good of all the people in New Orleans, especially the many who are forgotten, have always been her primary objective. She may accomplish getting a little justice for someone, but there [will] always be more work for her to do!

What was your favorite way to spend time while living in New Orleans?
The first thing I always go to in New Orleans is the sky. I found this great old home to rent that put me up on a second story without many other buildings around me. And, oh, when it rained, the rain would fall down those old melted glass panes in that building, and the shadows it cast on the wall … and the sunrises and the sunset—and the sky painted in so many colors—I was just endlessly fascinated by the sky of New Orleans! I had a bike and [would ride] from the Lower Garden District to Whole Foods, and bicycle my groceries home, and that’s how I felt most connected to New Orleans.

You’re so refreshingly independent. New Orleans must have totally suited you!
[Laughs] That is very insightful of you! Here’s my theory on that notion: I was brought up with a great deal of a sense of freedom about myself. In retrospect, I probably could have used a few more rules! I met a lot of people in New Orleans who say they came there and found—at long last—a place where they can be their true selves, and they are never going to leave! They call themselves New Orleanians now. It’s a beautiful thing! And I can’t help myself: I’ll see someone in Switzerland with a Saints hat on, and I don’t care if they’re across the fancy plaza in Zurich, I’m gonna call out a “WHO DAT!!” [Laughs]

Yeah you right! Your Oscar Award for “The Fighter” was amazing! You seemed genuinely thrilled and surprised when they called your name.
I was definitely that! I was happily, deeply at work in New Orleans throughout the opening of “The Fighter,” and all the Oscar campaigns and wonderful things that were going on in my life. I was grateful to be able to come back to my beloved Toni Bernette, and her beloved New Orleans, and do what I know how to do best, which is go to work. I had my Oscar in my possession on the set to get hugs and show everyone the little golden man, and, right after—I believe it was Rex who invited us onto the float for Mardi Gras—and I just kept trying to find a photograph of it or a record of it, because, for me, the story was “Melissa Leo Celebrates Her Oscar Win at Mardi Gras with the Whole Town!” [Laughs]