Brandon Berger finds flourishing opportunities at home in New Orleans.
When Brandon Berger moved back to New Orleans in 2008 to take a role in the family business—commercial real estate development firm The Berger Company—the city was a tough sell. 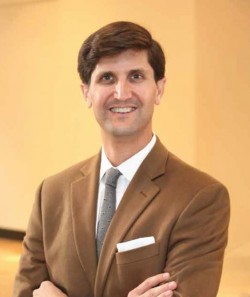 Not only was it only a few years post-Katrina but the collapsing economy was driving businesses to shrink their holdings. Nevertheless, The Berger Company stayed bullish on the Crescent City.

The Berger Company handles all aspects of commercial real estate development, start to finish. Certain projects begin with land purchases and construction, and end with the company leasing space and handling ongoing operations. In recent years, however, the market hasn’t supported much new construction, so the company has focused on acquisitions and the repositioning of assets. Brandon Berger’s role is to handle asset management and greater company strategy, but he also stays closely involved with key holdings on a daily basis.

The Shops at Canal Place is one of those holdings. In 2009, The Berger Company brought management of the region’s only luxury mall in-house, and, since then, sales at the property have increased 47 percent—an exceptional rate of growth in the retail industry. “Really, nothing speaks louder than the bottom line. Those numbers would get attention from national retailers at any time, but now, compared to other markets around the country, New Orleans looks even better,” Berger says.

Canal Place in recent years has signed leases with a number of high-profile retailers, such as Anthropologie, Michael Kors, J. Crew and lululemon athletica. This fall, Tiffany & Co. will be the next major retailer to open. Berger points out that few companies are as judicious as Tiffany & Co. when choosing new markets, so its entry into New Orleans is a feather in the cap for the city.

The Berger Company is also behind the fall opening of H&M at the Marketplace, in the heart of the French Quarter. “I have to give credit to my wife to really push us to get an H&M in this market,” Berger says. “More [exciting] than that, it’s a flagship store with 32,000 square feet. Ours will be the first one in the country to have a home goods line.”

Beyond retail, The Berger Company has its hand in other real estate developments, including the luxury hotels Omni Royal Orleans and Windsor Court Hotel, both of which have undertaken major renovations since they were acquired in 2008 and 2009, respectively. Not all properties are luxurious, however. The company owns and manages many parking lots, including several in the French Quarter. Parking lots may not be glamorous, but they are essential.

“Parking started as an adjunct to the other properties, but it’s a good business to be in—even if it’s sometimes challenging,” Berger says. “Every lot has to be managed carefully. It’s a high-intensity operation. Our lots support our businesses and the city overall… improving access to all the locally owned stores and bringing in customers.”

Brandon’s father, WHO, founded The Berger Company in 1972, and his four children grew up steeped in the business. Brandon remembers conversations about real estate around the dinner table and accompanying his father on closings as a boy. All of the children learned the business through example, and all are involved in commercial real estate in some way or another. Two of the siblings live out of state and run their own companies, but all of them keep ties to the family business. Meanwhile, their father stays involved and serves as a mentor.

“Knock on wood, but we’ve never had an internal conflict between us,” Berger says. “I think we all offer unique and complementary skill sets.”
He grew up in New Orleans; attended Isidore Newman School; and went to Vanderbilt University in Nashville, Tenn., majoring in history. His education took a more specialized turn when he enrolled in graduate school at Boston’s MIT, where he studied real estate development and finance. Berger then lived in New York for about a year before his personal ties to New Orleans and his sense of opportunity here called him home.

“For New Orleans to live through both Hurricane Katrina and the financial crisis—to not only survive but thrive—well, that’s the definition of a resilient city and market,” he says. “I think New Orleans is an attractive place for business for the same reasons it’s an attractive place to live and visit. That’s why we’re experiencing an influx of talent. The secret is out on the New Orleans renaissance.”