Custom-designed pieces are all in a day’s work for Aucoin Hart Jewelers. 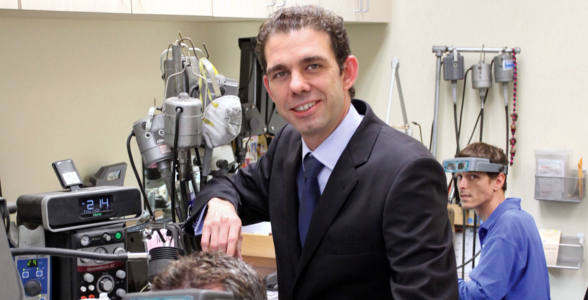 When it comes to diamonds, Ryan Aucoin, co-principal of Aucoin Hart Jewelers, knows his stuff. “People talk about the ‘four Cs,’ but to really appreciate the beauty of the diamond, it goes well beyond that,” Aucoin says. The New Orleans native describes himself as passionate about finding, refining and setting the world’s most precious gems. “You never get used to it,” he says.

A New Orleans institution for three generations, Aucoin Hart Jewelers got its start when Aucoin’s grandfather, a watchmaker, bought out his employer at then-downtown Hart Jewelers. The business moved into its Metairie Road space in the late 1950s.

The jewelry store’s other principals are are Ryan ‘s brother, Tommy Aucoin, Jr., and his father, Tommy Aucoin, Sr. Ryan is responsible for sourcing diamonds from all over the world, while Tommy, Jr., manages the sales and front-end aspects of the business. As president of the company, Tommy, Sr., oversees operations.

“What makes us different from a lot of jewelry stores is that we create a lot of the jewelry right here on the premises,” Ryan says. The store sells pieces from top jewelry designers like David Yurman, Simon G and Mikimoto, but, with 15 jewelers in the store’s workshop, including a few master jewelers and a watchmaker, Aucoin Hart Jewelers also has the resources to create custom jewelry and one-of-a-kind rings.

“Not many jewelers are doing this anymore,” Ryan says of the business’ ability to create unique pieces for its customers. He sees the store’s jewelers as “naturally gifted artists.”

Ryan’s personal enthusiasm for the custom jewelry-design process is evident. “A guy can come in and choose parts of different rings that he thinks [his fiancée] will like, or use her Pinterest pictures,” he says. “We’ll sketch the ring or design it using computer-aided design. Then we can tweak it. We print the file in wax from our 3D printer—then it gets cast. He can literally follow the process.”

Recently, Aucoin Hart Jewelers became one of a select number of diamond cutters to sell De Beers Forevermark diamonds, a branded line known for its beautiful, rare and responsibly sourced diamonds. The distinction goes hand-in-hand with Aucoin Hart Jewelers’ commitment to creating the best work possible. “We’re very serious about appraisals, ethics, education, honesty,” Ryan says. “How we make things seems so unusual to people, but I’ve been around it my whole life.”

The store also recently completed a two-year renovation, starting with installing the latest equipment in its workshop. Its new showroom was the final touch. “We wanted it to be inviting and welcoming, with more of a French, country-residential feel, as opposed to a corporate, cookie-cutter store,” Ryan says. “We did it for our customers.”

Ryan hopes to someday make New Orleans known for fine-jewelry making. “When you see someone’s face as you present the ring for the first time—that’s everything,” he says. “There’s so much work behind each one of those boxes.”

925
previous Focal Point: St. Charles Vision is more than meets the eye.
next All Dogs Go to Prison