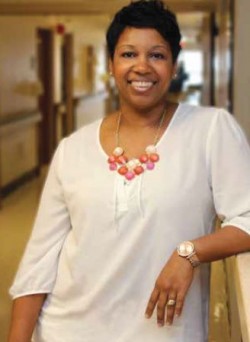 Patricia Brown, lead social worker at West Jefferson Medical Center, has focused on helping others since her school days at John Ehret High School. “In high school, I was the one who broke up the fights, stopped the arguments,” says Brown, who grew up in the Marrero area.

Brown’s compassion led her to earn her master’s degree in social work from Southern University at New Orleans. After graduating, she worked for a grant-funded program that focused on supplying community resources to women trying to get back into the workforce.

Brown primarily works in labor and delivery, offering counseling for postpartum, NICU and bereavement, as well as adoption assistance. She also works in end-of-life care, helping patients and their families to understand the diagnosis and their options.

Brown’s toughest challenge in caring for end-of-life patients is when family members are “not on the same page, and you have a split decision,” she says. She urges patients and families to consider their wishes before the need arises. “You don’t have to have a terminal diagnosis to have a power of attorney,” adds Brown, who also counsels her coworkers through bereavement and emotionally trying cases.

On the flip side, Brown finds it rewarding when end-of-life patients know what they want and have completed the necessary documentation. “It’s refreshing, knowing that all of their wishes were carried out,” she says.

Brown enjoys the “family camaraderie” within her department. “The type of job that I do from day to day takes time, patience, organization and compassion,” she says. Though she has no plans to leave West Jeff, her personal goal is to complete her LCSW certification.