It takes one look at Holly Robinson Peete to understand why New Orleans Living turned to the accomplished actress and author, dedicated philanthropist, supportive wife and full-time mom for some positive New Year’s inspiration. 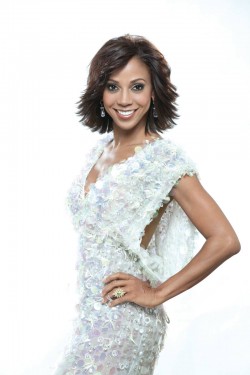 But as flawless as the gorgeous superwoman appears, she insists she is human.

“Today was a cheat day for me, but tomorrow is another day,” says Peete, regarding sugar, her absolute Kryptonite. “I like to eat big for the holidays and celebrate food, but if I stayed on the straight and narrow path most of the week, then I’ve earned the right, like with anything in life; that’s what I’m trying to show my kids. You can tell them ’til you’re blue in the face, but if they don’t see you doing it, forget it!”

Indeed, Peete’s four children see their mom doing plenty good, not only by making healthy food choices, but also through her passionate work with the HollyRod Foundation, which she founded with her husband, retired NFL quarterback Rodney Peete. The foundation focuses on giving care to those living with autism and Parkinson’s disease — fitting tributes to both Peete’s eldest son, RJ, who was diagnosed with autism, and to her father, Matthew T. Robinson, Jr., who enjoyed a successful career in the entertainment industry, including playing Gordon on “Sesame Street,” and who later developed Parkinson’s.

“When my dad got Parkinson’s in the mid-‘80s, there was no Google, Mohammed Ali or Michael J. Fox to shine a light on what the heck it was,” Peete says. “Now we know certain foods you eat play a role, and that exercise is key for staving off symptoms. Exercise is probably the No. 1 thing you can do for yourself, not only with Parkinson’s, but in life.”

Peete has attained many of the goals she’s set for the HollyRod Foundation. “I wanted to provide an outlet for hope and inspiration for families experiencing what was, for us, a devastating diagnosis. People say to me, ‘My family member got diagnosed … ’ and I say, here’s the good news: Today you have a template you can follow to help you live a quality life. And my ultimate goal is to have a place for every family in the country to get treatment and not have to worry about paying for it — to be like the St. Jude [Children’s Research Hospital] model. I want to share info with families for when their children age out, become adults, need jobs and need to be a part of society. I get a rush knowing that I did something to help alleviate someone’s grief, and I want my kids to see what I’m doing because I want them to live a life of service as well.”

Along with her charitable endeavors, Peete is hard at work this year. “I have a busy, crazy life with four kids, and I’m trying to stay relevant in Hollywood, on the road to 50,” Peete says with a laugh. She’s developing a daytime TV project after realizing how comfortable she was doing live television on “The Talk” for one year. She’s also considering some sitcom work. And the sequel to “My Brother Charlie,” the book she and daughter Ryan Elizabeth Peete wrote about autism and acceptance, will be out in 2014. “It’s about autism and adolescence,” she says. “My son is 16, and he has challenges; that’s what we’re living now. We want to help families get through it.”
When it comes to work locations, New Orleans is at the top of Peete’s list. She was able to parlay a cameo shoot for the film “21 Jump Street” into a trip to the Big Easy. Not surprisingly, New Orleans is the city where she exhibits her biggest weakness for food. “There is something so magical about New Orleans food,” she says. “I will save up for it. I don’t know how you all live down there! This past Super Bowl, I ate myself silly and had the time of my life.”

Peete adores New Orleans architecture almost as much as the food, especially the home of actress Jennifer Coolidge. “When we went to a party at Jennifer’s home, I tried to figure out how I could live there,” Peete says. “How can I bring all of my family and live in this house? There is something so magical about New Orleans, and Jennifer’s house has so much love in it. I understand the fascination of wanting to be down there.”

For now, Peete is ringing in the New Year family-style. “My dad is gone, but his birthday is New Year’s Day,” she says. “So it’s a huge celebration remembering his awesome legacy, and my mom is still with us; she’s a lot of fun — a real spitfire. And when we make our resolutions, everyone has to videotape themselves on what they want to change, what they loved and didn’t love about last year, and then we play them back every year, and everyone is stone-cold busted! We look at each other and go, ‘Oh-oh, I didn’t quite get that done!’” It’s all in fun, a life element obviously important to Peete. “We need to focus on the things we’ve done instead of what we haven’t done, because everyone’s accomplished something,” she adds. “New Year’s is always an opportunity to start over and have some new beginnings.”

For more information on the HollyRod Foundation, please visit hollyrod.org