Growing up in a suburb of Detroit, family medicine specialist Dr. Jonathan Cone didn’t have a lot of exposure to the practice of medicine 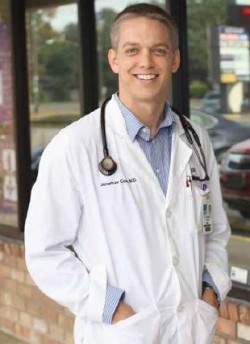 — but after traveling to Latin America in high school, he became interested in primary care. “I came across a lot of poverty and a lot of need for medicine,” he says.

As an undergraduate, Dr. Cone studied the history of medicine at Duke University and continued to work at the university in a research capacity for two years after graduating. In 2006, he enrolled at Tulane University School of Medicine, knowing that New Orleans’ post-Hurricane Katrina environment would be taxing. “I just felt like there was such a huge need,” he remembers. While at Tulane, Dr. Cone became involved in the local community, gutting houses and providing basic medical care.

Because he enjoyed all aspects of his medical school rotations, Dr. Cone decided to specialize in family medicine. “One of the things I really enjoy about family medicine is [that] it’s comprehensive health care that you’re applying to all ages; all genders across the spectrum, which I find challenging and exciting,” he says.

Another reason Dr. Cone chose family medicine is its emphasis on wellness and preventive care, including vaccinations and counseling on routine health maintenance — like diet and exercise. “It helps place family and community in context,” he says of his specialty.

Shingles and Your Family

What is shingles?
Shingles, a disease characterized by a painful, blistering skin rash, is caused by the varicella-zoster virus (the same virus that causes chickenpox in children). When chickenpox goes away, the virus remains dormant in nerve-cell bodies and may surface years or decades later as an outbreak of shingles.

Who is at risk for shingles?
Anyone who has ever had chickenpox is at risk for shingles. “Most people who experience shingles are above the age of 50,” Dr. Cone says. There are several potential reasons for the prevalence of shingles in older people, including the fact that as we age, our immune systems are less effective at preventing disease.

What are the symptoms of shingles?
The first signs of shingles are nonspecific, making shingles hard to diagnose in its earliest stages, and initial symptoms include fever, headache and fatigue. Next, a burning, itching or tingling sensation begins in the affected area. The characteristic sign of shingles, following these initial symptoms, is a reddish, slightly raised rash.

The rash usually appears in a stripe or band corresponding to a dermatome (an area where a spinal cord nerve connects with the skin). “It’s almost always on one side of [the] body, following the distribution of one or two nerves in that area,” Dr. Cone explains. The rash then becomes vesicular, forming blisters that may be filled with fluid, and eventually crusts over and heals.

Shingles is generally accompanied by nerve pain that may range anywhere from mild to severe.

What are the risks of shingles if left untreated?
According to Dr. Cone, about one in five shingles patients develop a condition called postherpetic neuralgia (or severe, lasting nerve pain). This pain can last for weeks, months, or years after a shingles infection.
Shingles also can involve nerves throughout the body, including those in the eyes. Along with excruciating pain, a shingles infection in the eye(s) can lead to blindness.

How can the risk of getting shingles be lessened?
Shingles vaccinations are recommended for people ages 60 and older, and vaccinations are available to patients beginning at age 50. “It’s better to get it earlier rather than later,” Dr. Cone says. “Vaccines work through what we call ‘herd immunity.’” So the more people who get the shingles vaccine, the lower the chance of a community outbreak.

“Certainly, shingles is not the only vaccine that we recommend people get,” Dr. Cone advises. “Vaccines can be a little confusing for patients, so I encourage them to come in and talk with their primary care doctor about it.”
If you have questions about shingles or the shingles vaccination, or would like to book an appointment with Dr. Cone, please contact East Jefferson General Hospital’s Internal Medicine department at (504) 738-1600.