The charismatic fitness icon’s positivity motivates millions. Having grown up in the French Quarter, Richard Simmons is well aware of the willpower challenges presented by our city’s food and drink. 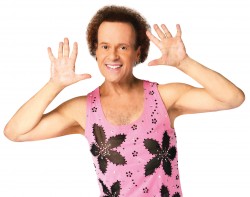 Here, Simmons takes a minute to tell New Orleans Living about his personal diet and workout routine, and the challenges and rewards of being a role model.

On His Personal History
“I grew up in New Orleans,” Simmons says. “I’m a huge lover of food. Not that I can say I ate out of problems; I think I ate because it was so entertaining!”

Overweight throughout his adolescent years, Simmons spent a long time hating his body. “It was bothersome, and I tried all different ways to lose weight — including throwing up, [and] taking laxatives and diet pills,” he remembers. “I lost weight, gained it back, starved and got very sick.”

He remembers telling himself as a teen that when he lost the weight, he’d truly love himself. “That just doesn’t work,” he says.

Simmons began investigating the science of nutrition, learning how to give his body the nutrients it needed. He also started exercising, and opened his legendary Beverly Hills exercise studio, Slimmons, in 1974.

Now 65, Simmons teaches more than 200 classes per year. “I’m very driven and very passionate about what I do,” he says. “This is not a career for me. It’s a passion.”

On What Works — and What Doesn’t
Simmons knows better than anyone that there are no magic tricks, special potions or miracle diets that will help shed pounds. He sticks to a set of rules, such as not eating after a certain time in the evening, and keeps an eye on his portions. “I call it ‘Mind over Fatter,’” he says.

As for diet, “I do eat a salad a day, whether for breakfast, lunch or dinner,” Simmons says. But don’t serve him arugula: “I don’t like the greens that look like they’re on someone’s yard,” he says. “I’m a Catholic-school salad [eater]: romaine, iceberg, spinach and lots of veggies.”

On Navigating New Orleans’ Many Enticing Foods
“Living in New Orleans is a challenge in itself,” Simmons says. “Just trying to deal with the food every day — it’s hard. Just know that God’s not taking any of that food away, so you just gotta watch your portions, fried food, eating at night and liquor.”

But even Simmons isn’t immune to temptation. “When I go to New Orleans, I still have to watch what I eat,” he says. “I have to be very careful. I’m very susceptible to overeating fried foods. I could fry leaves and eat them!”

On the Payoff of Living Well
Simmons’ energy and enthusiasm have made him a beloved worldwide role model — not to mention the physical benefits he reaps from his daily workouts. “I don’t feel 65; I don’t act 65; I don’t talk or walk like I’m 65!” Simmons says. “I feel like I’m 16 years old.”

He credits his longstanding popularity to plain old honesty. “The reason I’m still around is because I never lied to anybody,” Simmons says. “I never said, ‘Take this, drink that.’ I just said, ‘Love yourself, move your body and watch your portions!’”

“Get up in the morning, give yourself three compliments and say you can do it.”
— Richard Simmons