Home IN THIS ISSUE The Rise of Khiry Robinson
IN THIS ISSUE
SPORTS
January 31, 2014 Paul Wegmann 0

The Rise of Khiry Robinson 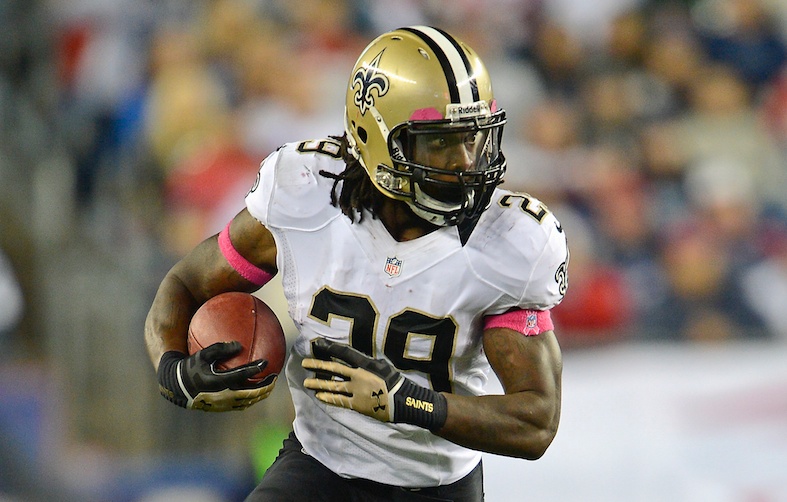 Saints fans can take great solace in the satisfaction of the 2012 season. The team captured its first-ever road playoff win in Philadelphia against one of the best young teams in the league and nearly blew up the Seattle Seahawks’ Super Bowl dreams when it momentarily commandeered their field in the fourth quarter.

But perhaps what fans should be most excited about is the sneak peek at what may become one of the NFL’s most fearsome running back tandems, featuring Mark Ingram and Khiry Robinson. Saints fans are used to a “running back by committee,” approach in which every back is special and no single back ever permanently takes a lead role. This system has been extremely productive in execution. The Saints led (with San Francisco) all 12 NFL post-season teams through the divisional rounds in total rushing yards. All season long, our running backs gained nearly 2,600 yards from scrimmage, and only three teams (Denver, San Diego and Detroit) had more. While there were only five running backs in the league to have 70 or more receptions, two played for the Saints (Pierre Thomas and Darren Sproles) and two of the other three (Jamaal Charles and Matt Forte) are of All-Pro (and maybe one day even Hall of Fame) caliber. No other team had two.

Against Philadelphia in the playoffs, though, Khiry Robinson finally took his step forward onto the big stage. The Saints put the ball in his hands on the final, game-winning drive multiple times, and Robinson looked so terrific that Hall of Fame former head coach Bill Parcells was oft-quoted during the following week as having stated that he compared favorably with another Hall of Famer: former Jets and Patriots great Curtis Martin. Robinson continued his surge by actually leading the Saints in carries against Seattle in the playoffs (in addition to a 13-yard reception), as the Saints piled up over 100 rushing yards against one of the toughest defenses in the league.

The Saints are among the top five NFL teams in terms of their number of undrafted players on the roster, and also in terms of snaps they receive, but what the Saints probably lead in, if there were a measure for it, is finding extreme quality outside the draft. Robinson came out of the college ranks from the same talent-laden junior college where Cam Newton played (Blinn, Texas) and then played at West Texas A&M, where in his senior year, he ran for 1,654 yards — a dynamic 6.6 yards per carry, 15 touchdowns, and 125 yards per game — while also catching 38 passes for over 10 yards per reception and four more touchdowns.

In the preseason, Robinson opened fans’ eyes with a nearly five-yard-per-carry average on nearly 50 carries. What became clear over the course of the season is that even with limited opportunities (only 54 carries year long), Robinson seemed to stand out, showing good start-stop ability and an instinct to hit the defense where it wasn’t as he ran to the open spaces, which is a rare thing for young running backs to do effectively. In junior college, Robinson even played some strong safety, which might be one reason he also shows such little fear in hitting defenders if met head-on. Perhaps it is the rare combination of elusiveness and power that garnered him Parcells’ comparison to Curtis Martin. Against Seattle, it seemed that Robinson was several times nearly just a tackle or two away from breaking a run (and the game) wide open, and he took one run in for the Saints’ first touchdown.

Whatever his public perception as a pass-first coach, Sean Payton does have a terrific history of finding and accentuating the abilities of great running backs. Besides the Saints’ current all-star cast of Thomas, Sproles, Ingram and Robinson, there have also been Reggie Bush and Joique Bell (both now starring with the Lions), Chris Ivory (now featured with the Jets), and of course, Deuce McAllister and Tiki Barber (of the Giants, when Payton was offensive coordinator).

But not only that: Payton is, perhaps counterintuitively, among the most likely coaches in the league to feature his backs near the goal-line. Between 2006-2011, New Orleans had the fourth most carries inside the five-yard line (158, behind New England, San Diego and Houston) and the fourth most rushing touchdowns from inside the five-yard line (59, beside the same teams, in addition to the Adrian Peterson-led Vikings). What is also clear is that there has been a sort of paradigm shift in the NFC, as the other three teams in the conference semifinals — Carolina, San Francisco and Seattle — have established themselves as run-heavy and defense-oriented.

So in a conference with a plethora of all-star quality passing quarterbacks, like Aaron Rodgers, Matt Ryan, Matt Stafford and several others, the teams that have most successfully made it to the end recently have been of another sort. Sean Payton always has his vision firmly fixed on the future, and it is just possible that in watching the playoff games against the Eagles and Seahawks, Saints fans caught a glimpse of that vision. What they saw were 56 carries for 279 yards and two touchdowns in two games, led by healthy doses of rushing from the Saints’ Mark Ingram and Khiry Robinson. The future has arrived.

661
previous The Business of Love
next Performance Enhancer