Dr. Corey Hebert brings health education to the masses.
Dr. Corey Hebert is no stranger to the media. The Baton Rouge native, who was Tulane University’s first African-American Chief Resident of Pediatrics during his medical residency, is a frequent contributor to shows like “How Stuff Works” on the Discovery Channel and “Dr. Oz.” 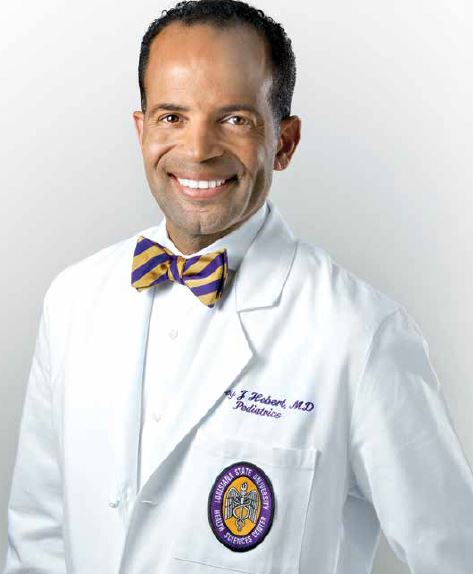 He’s also the medical director of both the Louisiana Recovery School District and Dillard University, and recently joined the faculty of Louisiana State University Health Sciences Center as an assistant professor of pediatrics.

After completing his residency, Dr. Hebert practiced in the areas of emergency pediatrics and internal medicine. A few years before Hurricane Katrina, while in private practice, he created his first television show, “Urban Pediatrics.” Then the storm hit.

Dr. Hebert’s clinic was closed for only 20 days post-Katrina. He felt called to help Louisiana residents manage the serious health issues associated with the hurricane, but wanted to address listeners on a broader scale. “It was an opportunity for me to step up and become a leader in healthcare, and healthcare media, for the city, the state and the country,” he remembers.

He joined New Orleans NBC affiliate WDSU as chief medical editor, addressing residents’ health concerns on-air. Soon, he was noticed by the Discovery Channel, Oprah Winfrey, Dr. Oz, and other media powerhouses. He began contributing to popular shows like “The Dr. Oz Show” and “Good Morning America,” and working with other networks, such as National Geographic, MSNBC and CBS.  He continues to work with several of these outlets.

Dr. Hebert sees his media work as an important community service, pointing out that patients rarely do in-depth research into their conditions. This abbreviated search process often leads to misinformation, which can be harmful to patients. “Nobody ever wants to look things up anymore,” he says. “If they can’t find quick health information, they’re not going to get their information appropriately. It became very important for there to be a standardized way of getting health information to people.”

The doctor’s motto is “Get to people where they are,” and by entering the world of television, he did just that. “You have to be able to communicate to the chairman of the board as well as the janitorial staff, wherever you are,” he says. “People will respect you and feel empowered. It helps them realize there is someone who cares.” Along with providing private medical consulting, Dr. Hebert sees patients three days a week at his Children’s Hospital Kids First clinic on Prytania Street.

Recently, Dr. Hebert launched Community Health TV, a video-based online health resource. The resource is the parent company of BlackHealthTV.com, a website where the African-American population can find information on common illnesses and conditions in an innovative online video format. More vertical offshoots are in the works, including LatinoHealthTV.com.

As for his work with LSU Health Sciences Center, Dr. Hebert is excited to be able to draw attention to the services the medical center is providing. “LSU does a lot of things for the community, and many people just don’t know,” he says. “My job is to get the word out about the things that LSU is doing for the community, as well as to engage the community in new, exciting programming to make New Orleans healthier.”

In the near future, he plans to reach out to the city’s faith-based organizations, and is putting together an essay contest for south Louisiana schoolchildren, based around the essay topic, “What does being healthy mean to me?” The contest will launch in March, and Dr. Hebert advises readers to be on the lookout for more new, exciting LSU Health Sciences Center initiatives coming soon.

849
previous So Healthy Together
next Health Check: Cheating Colon Cancer