Proud to Call It Home

Amy Boyle, of the Young Leadership Council, works tirelessly to improve the city she loves 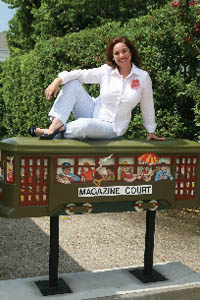 Amy Boyle is one of the city’s most visible young civic boosters and a true hometown girl. The New Orleans native graduated from Loyola and got an advanced degree from LSU, then came back to New Orleans and worked in marketing and public relations while she volunteered on various boards around town, including the Young Leadership Council. In 2006, she went from volunteer at the YLC to executive director.

The YLC’s most recent and visible projects are the Wednesdays at the Square concerts at Lafayette Square in the CBD, and A Streetcar Named Inspire, a public art installation of dozens of colorfully painted streetcar sculptures around the city. “We wanted something fun and tangible and celebratory of our culture, and we wanted to put color all over the streets,” explains Boyle. “And we picked streetcars with the idea that the streetcar came back after the storm … and so did we.”

Where did you grow up, Amy

I grew up in Slidell, but my mom’s family is from the Westbank. Right before I started high school, we moved to the Westbank and I’ve been there ever since, except for college and graduate school. I live in Algiers proper, where I bought a house, so I’ve come to call it my hometown. But I’m engaged to be married, so I’ll soon be moving into my fiancé’s house … Uptown!

Well, tell me about him.

His name is Sherwood Collins, and he works at Perlis and volunteers at the New Orleans music show on WWOZ on Thursday nights. We’re getting married in March 2009. We met at one of the [Young Leadership Council’s] Wednesdays at the Square concerts, and the rest is history.

So you’d advise single women to check out Wednesdays at the Square?

You used to work in public relations. Why’d you move to a nonprofit?

Even when I was a PR consultant, I was working with a lot of nonprofits. I always found fulfillment in that kind of thing, even back in high school, but after the storm I felt an increased pull. I was already on the board of the YLC, and I had this watershed moment: We would have our committee meetings on Wednesday mornings at 7:30, and I would find myself not wanting to go to work afterward. It was really a no-brainer. I work hard, but it doesn’t feel like work … most days, anyway!

You joined the YLC right after the storm. Has membership rebounded?

We’re back to whatever normal is these days— between 1,000 and 1,200 members. We’ve had a lot of people who have trickled back, as well as a lot of new, fresh blood who came in from out of town, and everybody’s just wanting to make a difference.

The council is the group behind the “Proud to Call It Home” bumper stickers. How do you feel about some of the knockoffs and parodies you see around town?

We laugh so hard! Come on—where else in America would someone say they were “proud to swim home”? It’s a testament to the original campaign and how it became integral to the fabric of New Orleans. As long as a retailer isn’t profiting from that— because we’ve always given away the stickers—it reinforces the idea that we love our city so much.

Amy, what’s the biggest barrier you see to the city’s progress?

I think that everybody has a lot of hope for the recovery, but sometimes as we get hit with frontpage stories about crime or charter schools not working the way they’re supposed to, the biggest challenge is to keep our hopes up. This has never happened anywhere in the U.S. before. We have a ton to overcome.

The one thing I’m focused on every day is making the city better. A really devastating day for me was when the policewoman [Nicola Cotton] was murdered. Those are just things that set you back, even though that’s not something that is unique to New Orleans; it highlights our mental health crisis. But I’ve always been a glass-half-full person. As many days as I get discouraged, there are 10 days that I feel optimistic.

So what do you do when you’re not improving the city?

We enjoy the food … I know that’s a typical answer! And we both have very big families, including cousins that are our age who are our friends. We have season tickets for the Saints, but we couldn’t quite afford them for the Hornets, so we got the mini-season pass. We think it’s fantastic we have two major-league teams that are successful in our midst. And I’m a seven-day Jazz Fester. I love the food, the music, the community, the chance to see people you know. Sports, food, music, culture, family—I’m just a typical New Orleans girl!

Oh, so tough. It’s a tie. Hornets in the spring, Saints in the fall.

Rum and coke or martini?

Oooh, that’s tough, too. A martini!

422
previous No Stopping the Hungry
next Grilled to Perfection