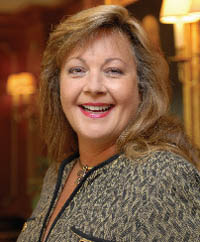 Of the approximately 70 Ritz- Carlton hotels that currently operate worldwide—from Shanghai to Berlin, Dubai to New York City— the largest hotel of any Ritz-Carlton project by number of rooms is the property in New Orleans. And the person who runs the show at the Ritz-Carlton in New Orleans happens to be a native of the city and a woman, which is something quite rare in the top ranks of the luxury hotel industry.

Myra deGersdorff, the general manager of the Ritz- Carlton here, at one time thought she’d become a teacher, and she earned her university degree in history. But when she took a job at a hotel while in college, she knew she’d found her life’s passion. She likes the joys of being a good host, the complexity of the hospitality business and the warmth found among its employees.

“There’s nothing more energizing than when you know your guests have had a great time, in part because of what you’ve done for them,” deGersdorff says in her unhurried, articulate manner. “The kinds of people who are attracted to this industry are caring individuals, and with so many people in one place who are all so caring, it makes hotels great places to work. Here at the Ritz-Carlton, I work with my friends.”

The Ritz-Carlton name is synonymous with luxury, and the New Orleans Ritz-Carlton, which opened in the former Maison Blanche department store on Canal Street in 2000, is even more luxurious than most when one takes into account the Maison Orleans. The Maison Orleans is a boutique, VIP hotel connected to the main property but with its own identity. The particularly high-end antiques and oil paintings, the lovely hardwood floors and the ornate furnishings are designed to evoke historic, antebellum opulence. A dedicated concierge staff is the same size as in the main Ritz-Carlton, but the Maison Orleans contains fewer than one-fifth the rooms.

Meanwhile, the Ritz-Carlton also has a third New Orleans property, the Iberville Suites, which is aimed more at the extended-stay market with suites containing sitting areas and kitchenettes. In all, the three properties host 757 rooms.

A big part of deGersdorff’s job as general manager is to work with sales and marketing teams to position these three properties in the greater marketplace. She also works closely with human resources to manage the three properties’ almost 700 employees, and she oversees the different operational pieces of the hotels—meetings and events, the rooms division, food and beverage divisions, and so on. Additionally, deGersdorff must keep an eye on the managing of the finances of such a large establishment.

“On any given day, I have varying levels of involvement with different aspects of the hotel,” says deGersdorff. “But really my job is more about the future than it is about the day-to-day. I’m spending as much time on 2009 as I am on 2008.” She says with rising gas prices and the uncertain state of the economy, it’s hard to say how the hospitality industry will be affected. The luxury market that makes up the Ritz-Carlton’s customer base is still traveling, but other segments are making new choices in their destinations and travel times. At least in New Orleans, things have been looking up. According to deGersdorff, the first part of 2008 has been “remarkable” for all local hotels thanks to a string of successful events.

The Ritz-Carlton reopened post-Katrina in December 2006 and is now approaching prehurricane revenues and staffing levels. Its spa, renovated and expanded after the storm, has surpassed previous benchmarks. The Ritz-Carlton also used the renovation period to launch a new restaurant, Mélange, with a unique concept that celebrates New Orleans cuisine.

Says deGersdorff, Mélange features one recipe each from over a dozen famous local restaurants¬—those restaurants most asked about by the hotel’s clientele. Chefs from the Ritz-Carlton trained in the kitchens of Clancy’s, Jacques Imo’s, Arnaud’s and others to learn how to consistently create the selected recipe. While these restaurants receive no direct compensation, they do get the promotional opportunity to share their talents with the Ritz- Carlton’s well-heeled, hungry guests.

DeGersdorff’s previous position before relocating to her hometown (less than two months before Katrina) was general manager of the Ritz-Carlton in Philadelphia. She witnessed how city arts initiatives revitalized a downtown neighborhood there and has hopes for a rebirth of Canal Street, where she recalls taking a streetcar to and going shopping with her friends as a teenager. In particular, deGersdorff is looking forward to the Broadway South project, which reimagines Canal Street as a theater district, getting off the ground.

DeGersdorff attended high school at the Academy of the Sacred Heart and still has many close friends from her girlhood days living in the area. She also seems to be related to almost half of New Orleans. She counts 51 first cousins and 150 second cousins here. Her great uncle was T. Semmes Walmsley, a mayor of the city in the early 1930s who had an infamous rivalry with Governor Huey Long.

Her career with the Ritz-Carlton started 19 years ago when the company had only 10 hotels in its portfolio. She’s lived in many cities and worked in a variety of positions and divisions as her career progressed to where it is now. As a woman, she says, “I’ve been fortunate. I’ve never hit that proverbial glass ceiling.” There are of course more senior titles she could ascend to in the company, but those positions would require nonstop travel.

“This is exactly what I want to be doing,” explains deGersdorff. “I’ve lived in some wonderful places, and I love moving around. But now that I’m home, I’ve very happy. Given my choice, I’ll stay in New Orleans for a long time.”