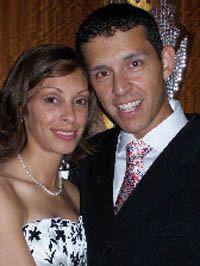 Cigarette smoking is endemic among Louisiana’s high school students. One in four are daily smokers and have little idea of the damage they’re inflicting upon themselves. Young girls may think there are benefits to smoking, but what they don’t realize is that tobacco harms the entire body, not just the lungs. Unfortunately, those smoking by the age of 18 are more likely to continue through adulthood.

Dr. Andrea G. Espinoza, a clinical instructor and director of pulmonary and critical care medicine at Leonard J. Chabert Medical Center, in Houma, decided that she couldn’t just sit idly by as young women were choosing to smoke and dying because of it. She was determined to do something. With the support of her husband, Luis, an orthopedic surgeon at the Orthopedic Center for Sports Medicine, a clinical instructor at LSU Health Sciences Center and a team physician to the New Orleans Zephyrs, Andrea funded and spearheaded the FATE Foundation (Female Awareness of Tobacco Effects). The campaign is designed to reach girls as young as 10 and educate them on the hazards of tobacco use. Andrea spoke with New Orleans Living about what motivated her to build the campaign.

A BIG PART OF WHO I AM is because my grandfather, who had 14 children, died of lung cancer in his 50s. I [came to realize] that I shouldn’t be asking wh y, but how can I do something positive? LAST OCTOBER we were expecting our third child—my little girl was 6 months and my son was 2 1/2—and we miscarried. Not even a week after that, my patient who was 33 years old—my age—died of smoking-related lung cancer. It was the most sobering moment in my professional career to stand there and tell her husband that there was nothing we could do. I stepped outside the room and the double doors to the ICU opened and there was her little 2-year-old boy with these huge blue eyes and he was holding his hands up toward me saying “Mommy.”

I SAID TO LUIS, WE’VE GOT TO DO SOMETHING. He suggested we get our colleagues involved because it’s not just about the lungs. He would teach his patients how tobacco affects the bones with poor healing and growth. Our dermatologist friends could teach how smoking causes acne and wrinkles. We knew if we could make this a community-level mission it wouldn’t be so difficult.

WE PLAYED WITH THE WORD “FATE.” “Female awareness” sounded like a positive thing. We came up with an idea that would be catchy, so when we started talking to the girls, it would be a cool play on words. How awareness affects their lives, their longevity and their fate.

THERE’S BEEN A LOT OF LONG NIGHTS, reading article after article; time and effort on weekends spent calling people; learning about the different agencies around the state and country; learning about grants; and about what a nonprofit is. We had no idea about any of this!

WHY NOT INVEST in the health of a culture and community that you believe so much in? We came up with $20,000 and decided to see what we could do to get the message out. We bought T-shirts, flyers, pamphlets and traveled to New York to speak with Teen Vogue about getting them involved.

TEENAGERS DON’T UNDERSTAND THE RISKS. They’re not in the magazines they pick up, not on billboards and adults don’t talk about them. Telling a 12-year-old that smoking could cause lung cancer is so out there. They don’t get that. They get, your boyfriend might not like you because your breath might be bad or your skin may break out; or it’s about your teeth, your heart or your potential for having children in the future. What we can do is make them understand that it’s more important to look 10 years down the line. It’s so much easier to say “I’m glad I never” than to say “I wish I never had.”

WE’RE PLANNING MALL NIGHTS WITH VOLUNTEER CIRCUIT SPEAKERS where we set up a booth and get teens to come over and we talk to them in a nonconfrontational way. Get them to ask us the questions. Get them physically involved with computers and simulation vests where they can see and feel what tobacco will do to them. We’ll get into schools and bring our message. All [the school has] to do is give us an hour and a group of teens.

WE WANT TEENS TO TEACH EACH OTHER. In a year or so, these teens that are empowered and smarter about their lives and health, we’ll help them find creative ways through theater to get this message out in the form of plays or skits about tobacco use.

THE PRECEDENT BEHIND IT ALL is that old African adage: “It takes a village to raise a child.” People can start their own little FATEs within their community—nurses, parents, business owners, other teenagers, anyone. You just have to have the passion.

1.31K
previous Mommy’s First Steps
next The Bond of Love