The Lights Are Bright in Broadmoor

Residents are moving back to their beloved neighborhood 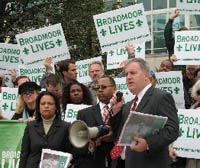 On a recent unseasonably springlike Saturday afternoon in May, the neutral ground along South Galvez Street in Broadmoor was packed. More than 400 people showed up for Broadmoor Fest 2008, an annual event that was first staged in 2006 to show city planners that residents were determined to bring back their neighborhood following the flood.

More than two years later, few doubt their resolve. This year’s party drew the event’s biggest crowd; all five food vendors sold their stock before the last of the five bands closed out the all-day affair.

“Overall, it was a huge success,” says Virginia Saussy, vice president of the Broadmoor Improvement Association (BIA). “Broadmoor Fest is a great barometer of our recovery because each time we have it, we see so many more people, and we get to reconnect with our neighbors.”

The economically and racially diverse Broadmoor area continues to bounce back as one of the city’s biggest success stories of neighborhood-based planning and recovery. The neighborhood, which was among the first to be slated for demolition by post-storm city planning processes, mobilized to create a community-driven plan for revitalization and for the return of residents to their homes.

So far, the results are impressive. Roughly 72 percent of the area’s 2,400 buildings are recovered or actively under renovation, says Hal Roark, executive director of the Broadmoor Development Corp. (BDC), a nonprofit dedicated to managing the neighborhood’s recovery. Roark, who works full time for the agency, says that most of the buildings under active renovation are estimated to be completed by the end of the year.

The BDC and the BIA completed an extensive block-by-block survey of all the buildings in the district, which is bordered by Nashville Avenue, South Claiborne Avenue, South Jefferson Davis Parkway, Washington Avenue and Toledano Street. Roughly 7,000 residents lived in the area before the storm.

“According to the Greater New Orleans Community Data Center, about 66 percent of the houses in Broadmoor are receiving mail,” Roark says.

Recovery efforts in the area have been boosted by several national organizations. Harvard University’s John F. Kennedy School of Government sent students and staff to help residents draft their recovery plan. The Clinton Global Initiative donated more than $5 million over two years to fund implementation of the plan. The Carnegie Corporation of New York gave $2 million to the BIA for the reconstruction, restocking and refurnishing of the Rosa F. Keller Library and Community Center. The library, shuttered since Katrina, is located at the intersection of Broad and Fontainebleau in one of the city’s 17 recovery zones.

The renovation of the library and the Andrew H. Wilson Elementary School on South Miro and General Pershing streets are two pillars of the recovery plan. The neighborhood-run charter school is currently in a temporary facility but will move into the rebuilt Wilson School building when it is completed in September 2009.

Because the district is 95 percent residential, most of Roark’s efforts have targeted residential redevelopment. However, he says the district is also working to recruit investment in two primary commercial corridors: Claiborne Avenue between Napoleon and Louisiana and the intersection of Broad and Washington. Most of the businesses in the latter corridor remain closed since the storm, but Roark says developers are eyeing properties such as the former Bohn auto dealership building and former Tivoli theater.

“The return of businesses is much lower than the residents’ return. Part of the problem is that there are not the same funding and grant opportunities for businesses as there are for residents,” he says.

Surveys show residents support the idea of bringing in low-impact ventures such as restaurants or coffee shops near the library; one group is considering building a community health care center in the area, Roark says.

Real estate prices are stabilizing in the area, says Kelli Wright, a Realtor with Latter & Blum who specializes in Broadmoor. “It’s very busy for me, and I’m well entrenched in the neighborhood,” says Wright, who, in late May, was in the process of working on five sales transactions in the area.

According to Wright, renovated properties in excellent condition are selling for an average of $128 per square foot, which is only slightly higher than the average for the first half of 2007. However, properties are moving faster. The average home stayed on the market 95 days in the first five months of the year compared to 114 days for the same time period last year. It’s a different story for unrenovated property, which is declining in value, she says.

282
previous Home Improvement
next Living in a Landmark