A local spa owner turns to automation for the ultimate body-bliss experience. 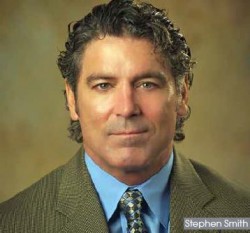 Whether you’re looking for a tan or a complete spa experience with everything from massages to facials, Planet Beach delivers on all fronts. But not in the way you might imagine. “Everything in the world is becoming more automated,” says Planet Beach’s CEO Stephen Smith. “Why not the spa business, too?”

It’s a rhetorical question for Smith, because Planet Beach is a spa that relies entirely on automation and robotic technology to perform services — it’s what Smith calls “spa-botics.” Rather than having masseuses on hand, Planet Beach offers massages via machines. One such offering on the menu is the HydroMassage, which takes place on a special bed that provides heated water-pressure massages through a synthetic lining. Meanwhile, the Hydro-Derma Fusion treatment uses heat and steam to surround customers in a capsule,providing skin rejuvenation from head to toe. And there are many other machines, including those for facials, tanning (both ultraviolet and spray), and oxygen therapy.

Locals with only a passing knowledge of the company may think of Planet Beach as only a tanning salon. The first location, which opened on Tchoupitoulas in 1996 (and is still there), was part of a national indoor-tanning wave. In conjunction with its rise, however, the indoor-tanning industry became the focus of harsh criticism from the medical community. Doctors decried the fact that extended exposure to UV rays from tanning beds can cause skin cancer and damage the skin in other ways. Meanwhile, tanning salons started to become the target of escalating regulations and new taxes.

“We recognize that continued overexposure to UV rays can lead to skin cancer,” Smith says. “We don’t want to overexpose our clients. It all came to crisis for us in 2004. We knew we needed to diversify.”

That’s when Planet Beach became the first spa to be fully automated. As a tanning salon, the company was already serving clients via machine. The new business model stepped things up a bit while also keeping the company’s appeal to its core target demographic of employed women in their late 20’s and early 30’s.

“We offer an affordable luxury,” Smith says. “Our clients might choose a full-service spa experience when on vacation, but, in normal life, they don’t have the money or the time to spend all day at the spa. Our machines are cheaper and the sessions take less time than they would at a traditional spa.”
Although Planet Beach’s customers were receptive to the change, Smith faced resistance from franchise owners — even from those who recognized that the present business was unsustainable and needed to be repositioned. Nevertheless, the transition was successful. Today, Planet Beach has 230 units throughout North America (with 20 percent of those in Louisiana) and another 30 units under development.

Like with other franchise businesses, Planet Beach offers support, standards and guidance to franchise owners in exchange for a fee. The owners have a direct stake in their locations’ success and are offered a degree of flexibility in what machines they choose to offer customers, as individual markets can vary. The company holds an annual trade show, where Planet Beach franchisees receive training and find camaraderie. Spa-machine manufacturers from all over the world set up displays in the vendor area to showcase the latest in spa technology.

Smith travels frequently to visit the franchisees. In the last year and a half, he’s been to 200 locations, from Nova Scotia to Texas. Of course, Smith is also frequently at the Planet Beach headquarters on the West Bank where he starts the morning promptly at 8:30am with a daily huddle with his staff. Smith grew up in McComb, Miss., and has always been athletic. He played junior college football for two years and has won bodybuilding competitions. After graduating from the University of Mississippi with a degree in political science, and dabbling in graduate school, he found his way into the gym business. He opened up a Gold’s Gym franchise in Oxford, Miss.; later, he sold it and moved to New Orleans to open a Gold’s Gym location here.

“Eventually, I wanted a change from the gym business,” Smith says. “The large spaces can be hard to manage. There was too much competition, and I didn’t really want to run a franchise anymore. Still, I’m glad I had that experience because it helps me understand the perspective of Planet Beach franchise owners.”

The tanning craze seemed to provide a good opportunity for him to venture out on his own; he found a location called Electric Beach that was for sale. He changed the name a year later, and his company took off.

But it hasn’t all been a non-stop upward trajectory. Smith has weathered the tanning-industry decline, Hurricane Katrina and the economic collapse of 2009, which hit his business hard. But things have stabilized since then, he says. The past year saw the first increase in franchise license sales, and Planet Beach is looking at another run at growth.

“More than anything, success comes from determination,” Smith adds. “Without it, there’s nothing. If you have enough focus on a goal, you’ll get there. You’ll need to evolve and adapt, and then just keep going.”

293
previous The Business of Love
next Retiring Rich