Through music, Lena Prima finds her way back home. 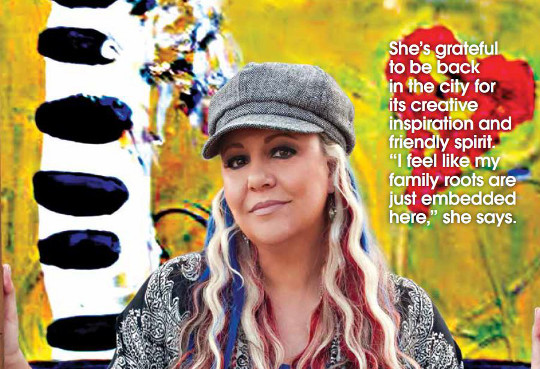 Singer Lena Prima’s recent debut album, Starting Something, was a true labor of love from the very start. Prima worked on the album’s 12 original songs with her husband, bassist Tim Fahey, and friend and fellow singer Ingrid Lucia.

The road to Starting Something was a long one, Prima says. A few years ago, she was living and working in Las Vegas, where she was born. As a performer there, she paid homage to the legacy of her father, famous trumpeter and entertainer Louis Prima. However, she continued to visit New Orleans, her childhood home city, since 2006.

In the spring of 2010, the New Orleans Jazz and Heritage Festival honored Louis Prima in recognition of what would have been his 100th birthday. Lena and her brother Louis, Jr., took to the stage to perform famous Prima songs. When Jazz Fest ended, Prima performed at the French Quarter Festival the following week. All told, she was here for about two weeks. And when it came time to go back to Vegas, she found herself unwilling to leave.

The next fall, Prima and her husband packed up and headed to New Orleans. Though Las Vegas’ declining economy made the move difficult, Prima says she and Fahey were lucky. “We just had one miracle after another,” she says. “It was meant to be. We were just meant to be here.”

Prima took on a weekend residency at the Hotel Monteleone’s Carousel Bar, finding her way into the local music scene. She’s grateful to be back in the city for its creative inspiration and friendly spirit. “I feel like my family roots are just embedded here,” she says.

In that vein, remaining in touch with her Sicilian heritage is another of Prima’s goals. “I really want to be a part of the Italian community,” she says. By performing at events like the Italian Heritage Festival in Kenner and the Italian-American Marching Club’s pre-parade party last year, which featured a 500-pound dish of pasta, Prima is realizing that goal. This year, she will serve as grand marshal of the club’s annual St. Joseph’s Day Parade. “I’m honored and grateful for that,” she says. “I know my dad would be proud of me.”

Last year with Lucia, Prima began finding a way to express her own feelings in song. “She really helped me to dig into my soul,” Prima says of her friend. The pair worked with Fahey to create the tracks that would become Starting Something. “The three of us wrote the songs,” Prima says. “We started recording tracks in August at Word of Mouth Studio. I loved every minute of it.”

The album, which is available on iTunes and from the Louisiana Music Factory, features more than a dozen local musicians backing Prima. Along with her original songs, the band also covers tunes by John Fogerty and Sass Jordan. “The musicians contributed their talent in a creative way that made the songs come to life,” Prima says.

This summer, the singer hopes to hit the road for a West Coast tour and dreams of bringing her music to a bigger audience. “I just want to continue to write and record,” Prima says. “That’s part of who I am.”

323
previous Rebecca Da Costa: Lovely Leading Lady
next A Cut Above the Rest