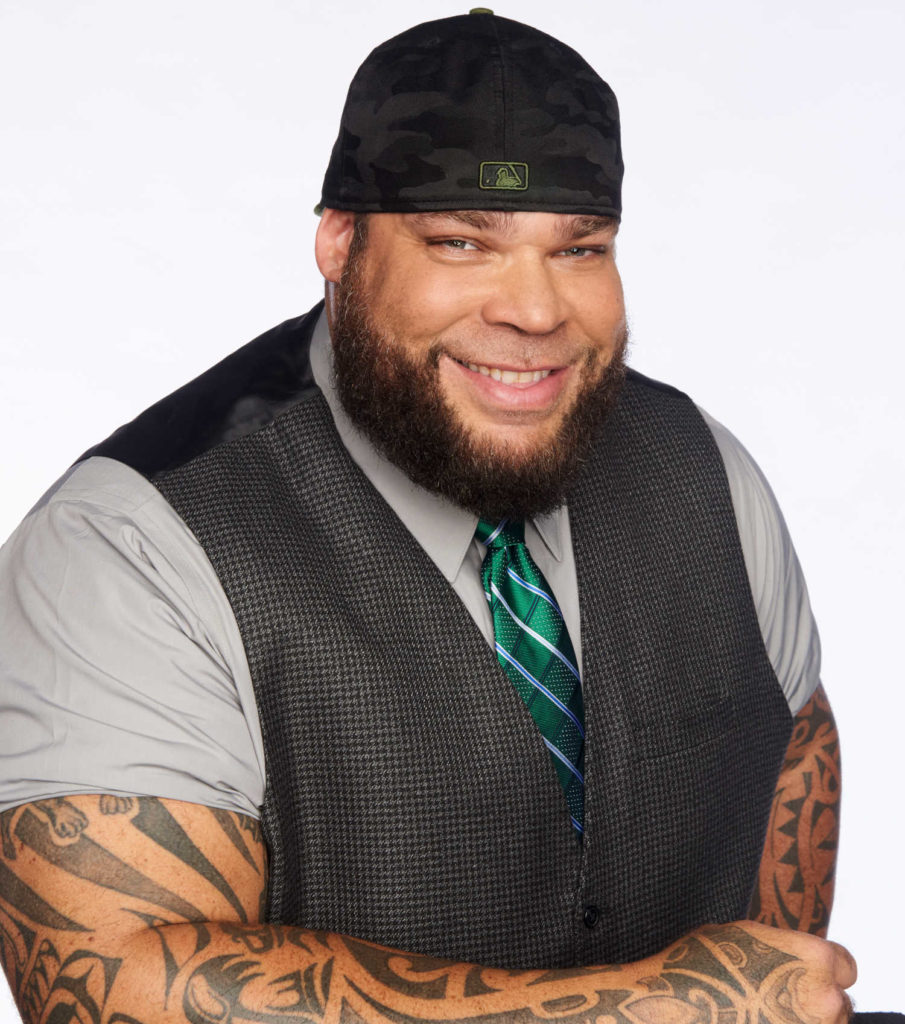 Tyrus began his journey into the limelight as a Hollywood bodyguard before becoming a professional wrestler first for WWE under the moniker Brodus Clay, and then as Tyrus, with Impact Wrestling (formerly TNA). After some good-humored banter on Twitter with FOX News mainstay Greg Gutfeld, Tyrus scored an invite from Gutfeld to appear on The Greg Gutfeld Show, which approaches politics with a humorous, satirical spin. After making an indelible impression thanks to his 6-foot-8-inch tattooed frame, quick wit, straight forward style, wry comic chops and major likability factor, in 2016 Tyrus became an integral fixture on the show, which airs every Saturday night at 9 p.m. on FOX News Channel. Later this month, Tyrus will debut his very own show, FOX Nation UN-PC, on the new on-demand subscription-based digital streaming OTT platform FOX Nation, launching Nov. 27. Designed to enhance the FOX News viewer experience, FOX Nation will feature exclusive content including political commentary and original shows like documentaries and investigative series, and Tyrus is truly looking forward to this new adventure.

“I’m working hard to put the best product forward on our new show,” says Tyrus, who will be co-hosting FOX Nation UN-PC along with FOX News contributor Britt McHenry. “When I came on The Greg Gutfeld Show it was established and running, and although Greg welcomes my input, the team was already set, so building this show from the ground up is a real cool experience for me. Being on the front end of something is both scary and exciting. I want to be hands-on with everything because it’s a learning process. Hopefully we do lots of live stuff; I feel like it brings out your best and it’s a gut check that lets fans know if you really have your stuff together. That has a lot to do with my WWE background, where it’s, ‘We’re live, pal, there’s no retakes.’ I’m kind of an improv guy anyway.”

On The Greg Gutfeld Show Tyrus’ knack for improv is obvious as he, Gutfeld, Kat Timpf and their guests offer comedy-fueled commentary on current affairs. “Greg is a great sport,” Tyrus says. “There are certain people you can joke with and pick at a little bit — that’s the beauty of Greg and I’s relationship. We are able to not put ourselves on a pedestal. Greg and I do a good job of showing that you can get along although we don’t always agree on things. We have different backgrounds and life experiences, but we respect each other. He’s fair. He’s a very powerful mentor for me. And we’ve developed a great friendship. We’re both movie buffs. I can’t say enough good about Greg and my support system, Kat [Timpf] and Tom [Shillue] and the whole staff — whenever I have a triumph, they’re there for me.”

Viewers of FOX Nation UN-PC can expect more of the call-it-like-he-sees-it, independent-minded commentary for which Tyrus is famous. “The term ‘political correctness’ is a shield for people to hide behind,” Tyrus says. “It’s more about arrogance and this feeling that, ‘I matter more than anybody else and so does my opinion.’ The whole point of making light of situations was to give reality checks to people, and, now that people can’t take it, I think there’s more of a need for it. We have lots of people in our country who think that everything they say is gospel; that their voice is just the songbird of their generation, and they can never be made fun of — we live in a very sensitive time. If you chose to be in the public eye, like people on political talk shows, then you have to take public scrutiny, like getting mimicked by comedians. I’m going to talk my views and what I think is important or funny, and just like I enjoy the praises and the laughs I get, I have to deal with people offended by things I say, or who don’t like the way that I look, and ask, ‘Why is your hat backwards?’

“And these Google geniuses and parrots in the political commentary world and on Twitter are like Ron Burgundy — they cannot answer questions, they can only read memorized statements from the teleprompter they wrote for themselves, even if it doesn’t fit the question,” Tyrus adds. “Anything outside the box, oh man. Imagine if you learned something new from someone you disagreed with, then gave that person props on-air. It would stop the show. We don’t have debates; whoever talks loudest and interrupts the other guy most wins. It’s affecting our kids; if it’s not their way they can’t deal. I don’t pretend I have all the answers. I genuinely look at issues individually and work hard at researching. It’s common sense. I refuse to say I know it all because I’d miss out on so many learning experiences. I can be fine with President Trump’s tax cut but I can have issues with the wall. Your political party should not be your favorite football team. There’s always going to be issues and we have to work on things together.”

It may come as a surprise that Tyrus lives on the Northshore just outside of New Orleans. “A lot of people are like, ‘What are you doing here?’ I’ve lived on the other side of the bridge from New Orleans in Mandeville for over three years with my family,” he says. “I love Mandeville, the town and the people. I prefer to know my neighbors, eat at the same restaurant for breakfast every day and go to the gym where I know everybody, and Mandeville has allowed me to do that. It’s literally, ‘Hey Tyrus, what’s going on?’ everywhere. They’ll give me tips on political views and stuff. Mandeville has that small-town feel I enjoy but is big enough to where it’s not like a small town with small-minded views and there’s only one store in town — I’m not all up for that. I enjoy seeing trees and people walking their dogs in parks. And I have a routine; I stay in the same circle. You’re not going to see me in Covington or catch me in Hammond. I’m in Mandeville unless I’m going to the airport.”

Commuting from Mandeville to FOX in New York City may be atypical, but Tyrus isn’t about to leave town. “We’re building a studio in New York, but, if I can pull off doing the show from home, oh, we’ll be, ‘Live from Mandeville, it’s Tyrus!’ We’ll be hanging on my back porch feeding Canadian geese, who are now Louisiana geese because they never leave. I’d like to go on location and do a town hall thing in Louisiana because the people of Mandeville and New Orleans have been so supportive of me and have made me feel at home. My daughter was born in Slidell and my significant other literally brought me to Mandeville — she wasn’t about to move anywhere else.”

His significant other, Ingrid Rinck, is CEO of the dynamically successful reduced portions food program Sensible Meals, which she created in Mandeville. “I’m a power lifter,” Tyrus says. “But sometimes I will out eat my training. I was 498 pounds, a biscuit away from 500. My other half, my daughter’s mother, started Sensible Meals and I wasn’t supportive at all. I was like great, another meal-prep company. Now it’s the largest meal-prep company in the United States, bigger than Jenny Craig, and I’ve lost 125 pounds on it. One reason I’m so impressed with Louisiana and New Orleans is that women here have meetings where they dress up with big hats and support each other’s businesses and stuff. I’ve traveled the world and I’ve never seen anything like these Southern customs. It’s refreshing that people are still able to rally around one another. I’ve learned a lot about community in the South.”

Born George Murdoch in Massachusetts and raised in California, Tyrus was shuffled around foster homes as a child and found comfort in sports. In 1992 he played NCAA football at Antelope Valley College in Lancaster, Calif., and, by 1995, he attended the University of Nebraska at Kearney on a football scholarship and graduated in education. He taught during the day, bounced clubs at night and became executive protection for Snoop Dogg. Wrestler Tommy Dreamer introduced Tyrus to the pro-wrestling world after witnessing him during a bar fight, picking up brawlers by the back of their pants “suitcase style” and ejecting them from the club, all while cracking jokes. Tyrus has been featured in popular TV series including The Purge, which he filmed in New Orleans, in GLOW as Mighty Tom Jackson, in MacGyver as Goliath, in Preacher as Hell Guard and as Dylan in the critically acclaimed Syn. He was in the horror film No One Lives and he voiced for Scooby Doo! WrestleMania Mystery. In addition to FOX Nation UN-PC and The Greg Gutfeld Show, he’ll continue to appear on FNC shows like FOX & Friends and The Five, and The Tom Shillue Show on FOX News Radio, and he’s a regular every Friday on FNC’s The Daily Briefing with Dana Perino. He’s active with the professional wrestling organization House of Hardcore. And he’s writing a book. “Writing a book is a fun, horrible process,” he says.

Tyrus’ deft stand-up skills will be live when he hosts a one-man comedy show in Picayune, Miss., Nov. 4 at Crackin’ Shells Dippin’ Tails at 402 W. Canal St. at 3 p.m. during the annual Picayune Street Fair. “I’m excited about it,” says Tyrus, who has previously torn it up on the comedy circuit leaving audiences in stitches, including at the House of Blues in New Orleans.

Tyrus is a huge advocate for dogs and supports the Louisiana SPCA and all things regarding animals locally. “The biggest thing missing in my life is a best friend, a dog, but my schedule is crazy,” Tyrus says. “I have dog withdrawals. I hate going to shelters because I want to take everybody home. But I found out you can volunteer to walk shelter dogs and stuff like that. I like that. I recently adopted two cats. I got them from the Northshore Humane Society in Covington. The superintendent, I guess, happened to walk by and goes, ‘That guy sounds like Tyrus!’ And ‘Why are you here?’ I said, ‘Oh, I’m just getting some cats.’ I wasn’t supposed to but my daughter loves animals whereas my son’s more into computers and marbles. I’m at the Global Wildlife Center a lot, feeding the giraffes and everything. Whenever the kids are on a break, they know we’re going over there. I’m there so much there’s one antelope that I think she thinks we’re emotionally involved.” @tyrussmash, @PlanetTyrus and nation.foxnews.com

37.36K
previous Dalton Primeaux
next Home for the Holidays