Rolling in the Roles

Amy Rutberg, the star of screen and stage, has a busy fall with recurring roles in NCIS: New Orleans on CBS and in the Marvel/Netflix hit series Daredevil. 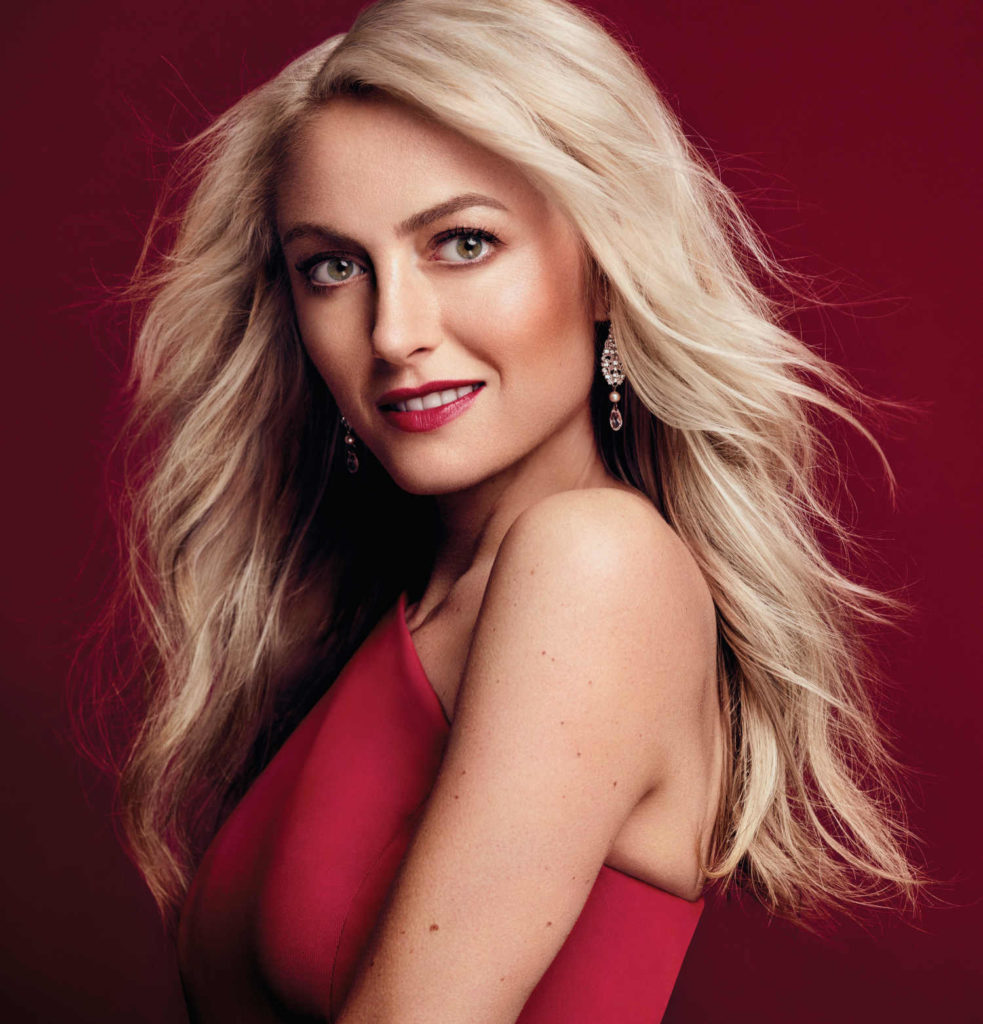 Actress Amy Rutberg is making big waves on television. Beautiful, gregarious and multi-faceted, Rutberg has lit up the small screen in TV favorites like The Good Wife, Blindspot, Taken, The Blacklist, Blue Bloods, Everwood and Pacific Blue, and illuminated the big screen in films such as Refuge, Sucker Punch and Recount. She’s back in action now in two of her breakout, recurring roles, as outspoken, high-powered lawyer Marci Stahl on the Marvel/Netflix hit series Daredevil, with Season 3 airing sometime this fall. She also made a return to the popular New Orleans-centric CBS police procedural drama NCIS: New Orleans in the Season 5 premiere, which aired Sept. 25. And while she played Megan Sutter, a CIA agent who died on a previous episode of NCIS: New Orleans in Season 4, this time she stunned audiences coming back to steal the scene as a very other-worldly character in the exciting season opener.

“Because my character Megan Sutter died on NCIS: New Orleans last season, and because the season finale ended with Pride [Scott Bakula] getting shot, that brought about some very interesting elements for this season premiere,” says Rutberg, while on location filming the 100th episode of NCIS:New Orleans at Magazine and Cadiz streets in front of La Boulangerie Bakery, which will run later in the season. “Megan Sutter has become a different character, and she’s leading Pride throughout all the life decisions he’s made so far as a sort of angel of death. The angel will be popping up throughout Season 5. It’s very New Orleans and she’s got this flirty vibe going on with Pride, and she’s a figment of his imagination. It’s one of the cooler roles I’ve played. And I’ve died on lots of network shows, on The Blacklist, Blindspot and Elementary, so when I died on NCIS: New Orleans my friends and family joked, ‘Oh, she’s dying again!’ So the fact that they brought me back is a pretty special thing for me on a personal level. The joke is, ‘They’re going to bring her back as a ghost,’ and they did.”

When Rutberg came to New Orleans to film NCIS: New Orleans last November, it was the first time she had been to New Orleans since she visited the city as a tourist a month after Hurricane Katrina in 2005. “The New Orleans I saw back then is not the New Orleans I’m seeing now,” Rutberg says. “I am blown away by this city. I mean, the food that I have eaten! I come down here, and it’s pretty much just like a food tour. I have hit all the favorite restaurants. I have been down here regularly since July — I didn’t know what heat was before. I got off the plane and the first words out of my mouth were, ‘Holy cat on a hot tin roof!’ But you can find me most nights at Pêche, sitting at the bar, ordering. Seaworthy is amazing. And I love Emeril’s.”

Rutberg has also become more familiar with the city in areas other than just the French Quarter. “On Magazine Street, they have the most amazing children’s store,” she says. “I have a 4-year-old daughter, Rowan, and I always go there and pick her up something. She knows New Orleans because of Tiana, the Disney princess in The Princess and the Frog, which takes place in New Orleans. She thinks I’m hanging with Tiana and she’s dying to come to ‘New Law-leens’ — that’s what she calls it. I hope when I’m back this fall I can bring her down. I’m also a former professional poker player; I played in the World Series of Poker a few times back in the day, so I’ve spent a decent amount of time in the nice poker room at Harrah’s Casino. I don’t get to do that in New York, so that’s another thing about New Orleans I love.”

Rutberg thinks the world of New Orleanians. “They’re the nicest people,” she says. “I went for a run in City Park then hailed a cab, and there’s a passenger in the backseat who says, ‘I’m only going two blocks. He can drop me off and come back and get you.’ That would never happen in New York where a passenger was looking out for a total stranger. I couldn’t get over that. People in New Orleans are so unnecessarily nice. And our crew on NCIS: New Orleans are all local and make it such a lovely experience. I have to say, there’s a difference between New Orleans and New York people. Everyone is so sweet, kind, patient and amazing at their jobs, and they’re like family. Especially when we celebrated the 100th episode party with all these speeches and a big cake-cutting, and all the CBS executives came down, so that was really fun. I can’t express enough how in awe I am of New Orleans and how working down here has been a highlight of my professional life. From the people to the food to the show, from the bottom of my heart, everything about New Orleans is pure joy.”

The new season of Daredevil, starring Charlie Cox as Matt Murdock (a.k.a. Daredevil), a blind lawyer possessing other superhuman-enhanced senses who fights crime during the day and turns vigilante at night, will debut sometime this fall. Rutberg, whose character Marci Stahl, as a part of the Marvel Cinematic Universe, has also appeared in the crossover show The Defenders on Netflix.

“The big question with Marci has always been, ‘What’s up with her on-and-off-again relationship with Foggy Nelson?’ [a lawyer played by Elden Henson], who is Matt’s sidekick,” Rutberg says. “At the end of The Defenders, for all we know Matt has died. So it will be interesting to see because of what’s happened to Matt, what’s now going on in Foggy’s life and how Marci fits into that. Marvel is really into these crossovers, so Marci works at the law firm where Jessica Jones [Krysten Ritter] works called Hogarth, so there’s an interesting story potential with that situation. And Marci is a many-layered character. On the surface, she seems like she’s kind of materialistic, like Elle Woods [Reese Witherspoon’s character from Legally Blonde] at the law firm. But Marci is much deeper than that. She’s a strong woman with a big job and the only one who looks out for Foggy’s best interests, is honest with him and always comes to his aid. At the end of the day, Marci loves Foggy, and, in Season 3, we’ll see whether she loves him as a friend or as a boyfriend.”

Rutberg is also in the regular roster of players on The Late Show with Stephen Colbert. “That has been a wonderful gig that I’m so grateful for,” Rutberg says. “I’ve played Stormy Daniels, Dana Loesch and I have a recurring character as this news correspondent, Amy Farblah. Those writers are unbelievable. They start writing it at 9 or 9:30 a.m.; we shoot it at 11 a.m.; then it airs that night or the next day. It’s pretty crazy. Stephen Colbert is a comedic genius and involved in everything. I’m so proud that he thinks I’m funny enough to be a part of his world.”

A native of Los Angeles, Rutberg was a precocious, extroverted child who loved putting on her own shows and entertaining. She grew up with a father who was a judge and a supermodel mother, so it’s no surprise that Rutberg is both gorgeous and intelligent. She excelled in school and skipped several grades, and was also president of the student body. She graduated high school at age 15 and then graduated from UCLA as a double major in music and sociology in only two years.

Musical theater was Rutberg’s first love in entertainment. “I moved to New York to do musical theater,” she says. “I had a pretty fruitful musical theater career in my late teens and early 20s. I was able to be part of a lot of hot musicals at the time, like Dracula, the Musical and The Civil War, where I toured with Larry Gatlin, BeBe Winans and John Schneider. I finished school, tooled around in L.A. a little, then went back to New York because my intention was just to pursue theater. And I did theater in New York, a lot of really cool Off-Broadway plays, and that started putting me on the map more, and I had a stint in my 20s where I was the spokesperson for Amazon Kindle, but it’s just been television ever since.”

Rutberg is happy that she’s often cast as ‘a girl with a job.’ “I was never going to play the little sweet ingénue or the girlfriend,” Rutberg says. “My type acting-wise is to play the CIA agent, the D.A., the surgeon. So this time now in my 30s is the time that I’m coming up in my career, which is unusual because often it happens in your 20s. I’m appreciative because I know what it’s like on the other end.”

Back home in New York, Rutberg does a monthly improv show with the comedy group The Upright Citizens Brigade, where she met a writer who helped get her on The Late Show with Stephen Colbert. “I do a show called Gravid Waters with this wonderful writer, Brian Stack, who’s one of the Colbert Show writers,” Rutberg says. “I’ve done this show for 10 years; we’ve had all kinds of crazy guests on the show, like Amy Poehler, Jason Sudeikis and Chevy Chase.”

Rutberg enjoys spending time with her family, which includes a precious Bichon Frise. “She runs the house,” Rutberg says. “She is the princess of the house and fiercely protective of my daughter. She slept under her crib when she was a baby and now sleeps with her in her big girl bed.” Rutberg is a supporter of the Louisiana SPCA, which was recently awarded Best Nonprofit for the 7th year in a row by Gambit Weekly’s Best of New Orleans 2018. “Adopting an animal and bringing them into your home is so easy, and the rewards are endless. The companionship of a dog or cat, especially one that’s been rescued, will always end up being a joy in your life. I have a long history of rescuing animals. I grew up that way because my parents were big fans of animal rescue. It’s so important.” amyrutberg.com, @amyrutberg