With 130 herbs and a French heritage, the monks may be onto something with Chartreuse

Along with Catherine Deneuve and the Huguenots, Chartreuse is arguably one of the best things to come out of France in 300 years. If absinthe is mostly mystique, Chartreuse is all legend—a secret manuscript describing a potion for the “Elixir of Long Life,” almost discarded and virtually lost several times before being resurrected, a recipe split between two monks, each of whom knows half of the formula, produced in a monastery in the mountains.

If our own story is true, it nearly deserves to be part of the legend. Two monks, draped in chocolate cassocks, tassels swishing, disembark briskly from an international flight, board a connection to New Orleans, flag a shuttle to a French Quarter hotel and, presumably, at this point in the narrative, nap. Later, they ask a concierge for directions to the Three Legged Dog, a bar on Burgundy whose patrons practice an American version of monasticism, sealing themselves off from the world and following various rituals at set hours of the day, mumbling the occasional prayer and otherwise generally lost in meditation.

Once inside, the monks extend their congratulations by uncloaking several precious reserve bottles they’ve brought from home and make an announcement: This humble establishment, it turns out, is the number one mover of Chartreuse in all of America.

Being so astoundingly complex, Chartreuse served neat (the way the patrons of the Dog like it) is a bit cloistered for the midsummer palate. Cut simply with ice and lemon juice, it’s just right in July. In the land of cocktails, it’s massively protean, a mansion at night with a green velvet lawn and a thousand windows: Every time you knock a light goes on in a different room. 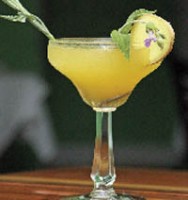 405
previous Grilled to Perfection
next Rise and Dine