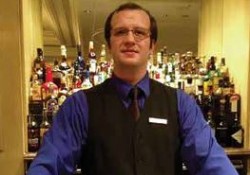 Araña Taqueria Y Cantina
This Magazine Street newcomer features authentic dishes and drinks from Mexico’s Yucatán region, including drunken horchata cocktails (made from ground almonds and rice) and meats slow-simmered in banana leaves. “We’ve developed a cocktail program that pays tribute to the Mexican cantina,” says bartender Kelly Crown. “Our goal is to use flavors and combinations that stay true to Mexico, while adding our own spin.” Don’t miss half-price tacos, sangria, margaritas, beer, specialty drinks and wines by the glass during the bar’s upbeat happy hour, Monday-Friday, from 3-7 pm. 3242 Magazine St., (504) 894-1233, facebook.com/arananola

Brennan’s
Following the December reopening of this French Quarter institution, customers will find power lunches, curious tourists and Champagne sabering by beverage director and sommelier Drew Brandwein each Friday at 5 pm — all in an effort to kick off the weekend in high style, of course. In addition to a classic-leaning cocktail list with a DIY Sazerac project (choose your own Rye, absinthe and bitters), the wine cellar boasts an astonishing 7,500 bottles (and counting!). 417 Royal St., (504) 525-9711, brennansneworleans.com

Davenport Lounge — The Ritz-Carlton, New Orleans
Fancy yourself a trumpet player after a few drinks? Byron Buck, resident mixologist at The Ritz-Carlton’s Davenport Lounge, makes a mean Pimm’s Cup, while headline trumpeter Jeremy Davenport takes the stage (debuting in 2015, private trumpet lessons with Davenport will be available to guests with musical leanings). If you’d prefer to just hang in the audience, swing by The Ritz-Carlton for its Bites, Barrels and Jazz program every Wednesday evening: There’s live jazz and a specialty menu of small bites (think crab-cake sliders or crawfish quesadillas) alongside tasting portions of small-batch American whiskeys and select wines. 921 Canal St.; (504) 524-1334, ritzcarlton.com

Salú Restaurant
It may be known for its killer (and cheap!) happy hour (go 3-7 pm Monday-Friday, and you’ll find all mussels, flatbreads and drinks half off), but Salú bartender Jeff Toler takes his cocktails seriously. “We’ve expanded our cocktail menu by creating our own house-infused spirits,” he says. “From vodka to gin, our customers love adding a new twist to traditional mojitos and other specialty cocktails.” 3226 Magazine St., (504) 371-5809, salurestaurant.com

Polo Club Lounge — Windsor Court Hotel
In addition to offering cocktail classes to local drink enthusiasts, head mixologist Kent Westmoreland is debuting several new sips with fun, historical back stories at the Windsor Court in 2015 — like the Miss Eleanor’s Secret. Ok, we’ll spill: Made with Grand Marnier No. 2 peach-raspberry liqueur and Champagne, the drink was named after a 125-foot schooner called The Eleanor Joan that was known to smuggle Canadian whiskey and Champagne (the vessel was captured by the Connecticut Coast Guardsmen in 1930). 300 Gravier St., (504) 523-6000, windsorcourthotel.com

The Palate – Most of us will start 2015 with good intentions, so follow through and drink wine for a great cause this January. In addition to delivering big citrus-fruit notes on the nose and intense flavors of apricot and apple, the proceeds from this Chardonnay benefit the Cure Alzheimer’s Fund.