Get into full swing this spring, and enjoy all of the delectable things the Crescent City has to offer! Let your hair down, and explore a world of sumptuous sips, exemplary eats and a whole lot of sunshine. 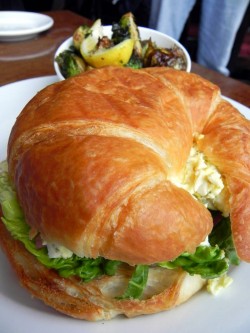 Stroll at: Ramble alongside the mighty Mississippi River at Woldenberg Park. Named after local philanthropist Malcom Woldenberg, this scenic, 16-acre park is perfect for taking a much-needed walk after a super-satiating lunch in New Orleans. Start right outside the French Quarter and admire the public sculpture; follow the boats along the river; stop in at Audubon Aquarium of the Americas; and perhaps end up shopping at The Outlet Collection at Riverwalk. After all of that trekking, you’ll soon be ready for dinner! auduboninstitute.org/aquarium

Sip at: Former Erin Rose manager Bert West and Ed Diaz of Bar Tonique have opened The Black Penny on Rampart Street in the space that once housed techno bar The Ninth Circle. Sporting comfortable booths, stone floors and exposed-brick walls, the new bar touts an easy-going environment aimed toward folks who live in the neighborhood or toward tourists looking for something more laid back than Bourbon Street. The Black Penny also moves away from the craft cocktail craze, offering only simple drinks and a whole lot of craft (and not so craft) beer in cans. 700 N. Rampart St., (504) 304-4779, facebook.com/pages/Black-Penny

Revive at: Whether you kick up your energy with a healthful shot of green juice or are a slave to caffeine like the rest of us, the latest downtown cafe could be your wake-up call. Peter and Cassi Dymond, owners of Satsuma, recently took over the PJ’s Coffee space at Camp and Girod streets to open Pulp and Grind. The new cafe offers cold-pressed, organic juices; house-made pastries; and, of course, killer craft coffee drinks. The pre-bottled juice blends include Nice Greens (with spinach, lemon, kale and apple), and the owners just announced pour-overs brewed with Casa Cruz Estate Panamanian coffee from Roseline Coffee Roasters in Portland, Oregon. 644 Camp St., (504) 510-4037, pulpandgrind.com

Hang out with history at: Located on St. Charles Avenue several blocks up from Lee Circle, Lafayette Square is the second oldest square in the city — and it’s used for civic events and inaugurations. The square, designed by Charles Laveau Trudeau in 1788, plays host to the 12-week-long spring concert series Wednesdays at the Square (which began in March), as well as the fall concert series Harvest the Music, not to mention hundreds of beleaguered businessmen and women looking to take their ease during lunch hour. nola.gov/parks-and-parkways

Brunch at: Break your fast at a home away from home inside half a shotgun double on Banks Street. Biscuits and Buns on Banks is a cozy little eatery in Mid-City that offers breakfast and lunch everyday of the week, except Monday. Get in line for freshly baked mini-biscuits, served with Steen’s Cane Syrup-laced butter, that come complimentary to your table. Dishes you shouldn’t miss include grilled watermelon and Brie, French toast with caramelized bananas and pancetta, and the fried andouille hash cakes with house potatoes and Creole cheese sauce. 4337 Banks St., (504) 273.4600, biscuitsandbunsonbanks.com

Paddle at: Rent a kayak or paddle board from Bayou Paddlesports, and enjoy a water-filled afternoon on the Bayou St. John! Practice paddling alone or with the whole family, and get revved up for the Earth Day Regatta on April 22! Stand-up paddle boards have become a popular past time, offering a full-body workout with minimum gear. Spend the day paddling away with friends, and kick back on the shores of the Bayou St. John afterwards to soak up what’s left of the afternoon sun. 1101 Florida Ave., (504) 515-3398, bayoupaddlesports.com

Dine at: Spend a warm, spring evening under the stars exploring Israeli cuisine at Alon Shaya’s eponymous restaurant on Magazine Street. Though this mecca for Mediterranean cuisine has only been open for a little over a month, it is already proving as popular as Chef Shaya’s other collaboration with John Besh, Domenica. Shaya’s wood-fired oven is cranking out freshly charred pita, brought hot to your table of course, as the perfect canvas for baba ganoush; labneh with radish and Anaheim peppers, ikra or paddlefish caviar; or roasted beets with dill and black pepper – and that’s just the beginning! 4213 Magazine St., (504) 891-4213, shayarestaurant.com