Garden District Pub  — “Three weddings have been borne out of this pub,” says Dianne Sciortino Lemons, co-owner of the Garden District Pub (along with her sister, Veronica Sciortino) — or Ms. D and Ms. V, as they are affectionately known to their customers. 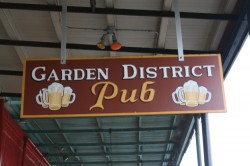 The sisters used the same footprint that their father Anthony Sciortino designed in the early 1960s, and they planned the decor of the Garden District Pub to evoke the “Gay ’90s,” with warm, subdued tones and a clientele that is fiercely loyal. Try the blazing hot Prairie Fire, a concoction of tequila, hot sauce and lime juice, or just simply ask one of the sisters to bring in your favorite brand. They order directly for their customers weekly. 1916 Magazine St., (504) 267-3392, gardendistrictpub.com
Igor’s Bar & Grill — In any discussion about the archetypal New Orleans bar, Igor’s is at the top the list. Since 1974, Igor’s classic black and red neon sign has beckoned generations of patrons to enjoy the handpicked choices of beer and liquor, but, as locals know, good drinks alone do not make a classic New Orleans bar.

“We only close at gunpoint,” says Brandon Carriveau, manager of Igor’s for the past 15 years, “and that only happened once, a long time ago,” he adds reassuringly. That’s the sort of philosophy that exemplifies a New Orleans bar.

What Igor’s does exceedingly well is create the most renowned bloody Mary in New Orleans. These drinks have become so legendary that it’s now a tradition for students at Tulane and Loyola universities to arrive en masse at Igor’s for a morning bloody Mary before each year’s commencement.

Though Igor Margan guards his bloody Mary recipe like Coca-Cola guards its own, he will allow that its origins began in a barbecue sauce he discovered in a now defunct po-boy shop near the current Igor’s. Margan added his own touches and seasonings — in experiment after experiment — until he was satisfied that he had the best bloody Mary in town. According to dozens of clientele and hundreds of university students, it appears that he’s succeeded. 2133 St. Charles Ave., (504) 568-9811, facebook.com/Igorslounge

The Ugly Dog Saloon & BBQ — New owner Jeff Bordelon bought the Ugly Dog Saloon without wanting to change the spirit of this longtime local favorite. Instead, he wanted to improve upon an established tradition of bringing craft beers, dog friendliness and neighborhood warmth to the Warehouse District. He added a 110-inch television to the front wall and upgraded all 17 TVs to HD. Bring your friends — or man’s best friend — in to savor the Tail Wagger, a rum and fruit concoction served in an Ugly Dog Bowl. 401 Andrew Higgins, (504) 569-8459, uglydogsaloon.net