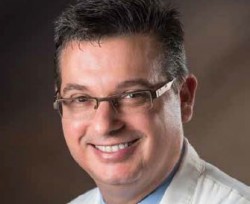 “Even as a child, I always had an interest in medicine,” recalls Dr. Barry Hallner. “Growing up, I wanted to be a doctor or firefighter. Helping others was always something that appealed to me.”

Though the interest was always there, Dr. Hallner’s path to the medical industry was not very direct. After graduating from Archbishop Rummel High School, he enlisted in the U.S. Army and served as a combat medic. Following college and medical school, Dr. Hallner returned to New Orleans to complete an OB/GYN residency at the LSU School of Medicine, where he was also selected for a fellowship in female pelvic medicine and reconstructive surgery.

“In medical school, I had a really wonderful experience during my rotations with OB/GYN patients,” says Dr. Hallner. “I enjoyed taking care of women and developed a good rapport with my patients. Then during my residency, I was exposed to female pelvic medicine and reconstructive surgery, previously known as urogynecology, and I was intrigued by the challenge it presented.”

In addition to pelvic organ prolapse, a large part of Dr. Hallner’s practice within this field deals with urinary incontinence. Approximately 37 million people, or one out of every six adults, suffer from “overactive bladder,” which entails urinary frequency or leakage to the degree that it affects everyday activities. Though numerous treatment options exist for urinary incontinence, Dr. Hallner says “many patients don’t seek care because they’re either embarrassed, ashamed or humiliated.”

While traditional treatments include behavior changes and prescription medications, Dr. Hallner offers sacral neuromodulation therapy, which pertains to improving communication between the brain and the nerves that control the bladder and bowels.

“Women who are having urge symptoms, those who are constantly feeling like they have to go and can’t make it to the bathroom in time, and who have tried medication without relief, could benefit from this form of advanced therapy,” says Dr. Hallner. He notes that sacral neuromodulation is one form of advanced therapy he offers; he first tries conservative approaches, such as pelvic-floor physical therapy, dietary changes and medication.

With sacral neuromodulation therapy, Dr. Hallner uses a device by Medtronic called InterStim®, which is a proven treatment option that helps to control the symptoms of overactive bladder (urgency-frequency and urge incontinence), non-obstructive urinary retention and chronic fecal incontinence. The technology is similar to a pacemaker and uses mild electrical stimulation to communicate with the nerves that run to the pelvis, bladder and rectum. The device is placed under the skin in the buttock. Dr. Hallner is one of only a handful of doctors in the area who offer this minimally invasive therapy, though it has been FDA-approved since 1997.

“At LSU, we have been very pleased with the results and 70?80% of our patients experience significant improvement,” says Dr. Hallner, who enjoys the way this procedure has allowed him to actively improve people’s lives. “It’s so satisfying to see a patient after the procedure. The improvement to some patients is life-changing and it means so much to me to be able to help them in that way.”