Libations for Locals: In the Spirit

Naturally, one of the best places to find a stellar cocktail is at a bar, but there are more than a few local restaurants that fit the bill as well. 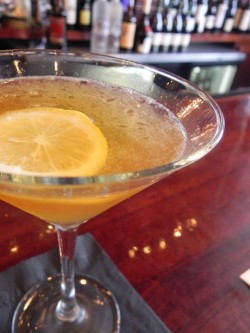 Coquette
Seats at the bar are always at a premium at chef Michael Stoltzfus’ stellar, upscale restaurant Coquette. Located on the corner of Washington Avenue and Magazine Street, this popular Uptown spot offers a menu that features Southern-inspired cuisine, like fried okra with pickled green tomatoes or Creole cream cheese cheesecake, but the spirits are certainly a large part of the attraction. Neighborhood denizens and visitors frequently hop up to the long wooden bar to sip on craft cocktails, such as the Conclusion (made with Del Maguey Crema de Mezcal and Lillet Rose) or the Jake & Elwood (a mix of Old Forester bourbon and blueberry shrub). 2800 Magazine St., (504) 265-0421, coquettenola.com

Compère Lapin
Celebrity chef Nina Compton’s new restaurant Compère Lapin in the Warehouse District has been under the spotlight since it opened only a few months ago, especially after it tapped Ricky Gomez, Abigail Gullo and Zac Augustin to work some creative cocktail magic behind the stick. And, as if things couldn’t get any better, Compère Lapin also announced a Happy Hour from 3 to 6 p.m., featuring $6 classics drinks, including Daiquiris, Old Fashioneds and Martinis. You’ll certainly want to pair those with some $5 snacks, like conch croquettes with pickled pineapple tartar sauce. 535 Tchoupitoulas St., (504) 599-2119, comperelapin.com

Dante’s Kitchen
Tucked back in a corner of the Riverbend where Dante Street meets the river, Dante’s Kitchen has been open for more than 15 years. While it may slip from the mind as new restaurants pop up all over town, it’s hard to deny the allure that this New Orleans favorite exudes from its kitchen. Chef Emmanuel Loubier keeps patrons coming back for more with consistently delicious cuisine. Almost everything is locally sourced, and made by hand and in-house (cocktails included). Try a Sazerac (in either the modern, classic or post-modern variety) or The Airlift (made with Batavia Arrack, Nigori sake and apricot), while you’re waiting on some Trois Mignons topped with debris, house-made Worcestershire sauce and Stilton cheese. 736 Dante St., (504) 861-3121, danteskitchen.com

La Petite Grocery
With pressed tin ceilings and a warm, clean atmosphere, it’s hard not to feel at home inside La Petite Grocery, a beloved neighborhood market-turned restaurant on the corner of General Pershing and Magazine streets. Chef Justin Devillier offers a menu of Creole-inspired cuisine, like blue-crab beignets and baked macaroni, while his new bar director Jesse Carr causes equally enthusiastic delight with his well-crafted cocktails. Jump for some Jubilation (concocted with Oryza Vodka, kirschwasser and Amaro Montenegro), or try LPG’s own French 75 (made with pear brandy and Champagne). 4238 Magazine St., (504) 891-3377, lapetitegrocery.com