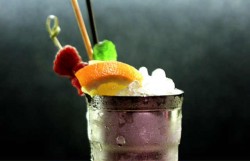 With jazz pouring out onto the streets, the rich, savory scent of gumbo in the air and a tempestuous history oozing from between the cracks in the sidewalks, New Orleans is arguably one of the most romantic cities in the world. We invite you to woo your Valentine with well-crafted cocktails, carouse through the city and canoodle in all available candlelit corners.

Bellocq at The Hotel Modern
Step back into Storyville at a bordello-like bar that embodies sensuality almost as much as its namesake. Named after the New Orleans photographer who captured portraits of prostitutes from the red light district in the early 1900s, Bellocq is the creation of Neal Bodenheimer, Kirk Estopinal and Matthew Kohnke whose libation innovations have dramatically changed the city’s cocktail culture. Share a love seat made for two and sip on rich, fortified wines, a licorice absinthe or fruity cobbler. Accidental touches and nervous blushing encouraged. 939 St. Charles Ave., (504) 962-0911, thehotelmodern.com/bellocq

Bouligny Tavern
A sophisticated wine bar with vintage furniture, Bouligny Tavern is the creation of chef John Harris who opened the lounge right next door to his popular restaurant Lilette on Magazine Street. Inside what appears from the street to be a traditional New Orleans Victorian sidehall — generous front porch and all — is a hip wine bar whose atmosphere dances between being either ultra modern or set back in the late 1960s. Take advantage of the low lights, exquisite cocktails and respectable wine list either inside at the bar or outside on the patio, and feed each other tidbits like Gouda beignets or tomato and crème fraîche crostini. 3641 Magazine St., (504) 891-1810, boulignytavern.com

Loa at the International House Hotel
It’s easy to be seduced by the luxurious, LM Pagano-designed Loa lounge inside the International House Hotel. The atmosphere mirrors the mystery, spirituality and romance of the city with all of her cultural influences, featuring richly upholstered round couches, semi-circular booths and candlelit tables. “Spirit Handler” Alan Walter will beguile you with his own, lovingly made syrups, bitters and tinctures, engaging you and your lover to experience ethereal flavors and aromas contained, feigning innocence, inside a cocktail glass. 221 Camp St., (504) 553-9550, ihhotel.com

Lafitte’s Blacksmith Shop Bar
Built in the mid-1700s, Lafitte’s is one of the oldest structures in the country that’s used as a bar. Although the place is often packed with tourists, it’s hard to miss the inherent charm and intrigue of Lafitte’s. If you’re sticking to traditional cocktails like Bloody Mary’s and Hurricane’s, this 300-year-old joint has some pretty skilled bartenders behind the stick, and, while a piano bar flooded with tourists may not spell out romance for some, many a lover has found a way, while surrounded by exposed brick walls steeped in pirate lore and lit only by the flickering of candles. 941 Bourbon St., (504) 593-9761, lafittesblacksmithshop.com