Growing up as an Army brat constantly on the move, Heidi Malnar discovered stability, passion and a love for movement when her parents first enrolled her in dance at the tender age of 3. Almost instantly she felt drawn to the rhythm and would seek out dance classes regardless of where her father and family were stationed. 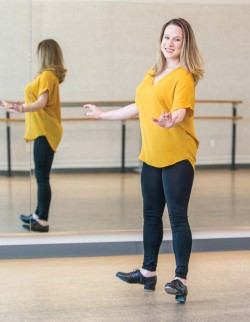 “I would always find somewhere to take classes, and I got to experience a lot of different teachers and approaches.” she says.

When her family finally settled down in Tennessee, Malnar was fortunate to connect with Debbie Belue, a well-known teacher and choreographer at Belmont University in Nashville. It was Belue who took Malnar’s tap education a step further, including making introductions to the right people and attending tap festivals in the region. “You quickly realize that [the tap community is] a very small world once you get out there and meet everybody.” Malnar says. “It’s very close-knit, and, even if you haven’t actively worked with somebody, you’ve certainly heard of them or know someone who worked with them.”

After attaining a Bachelor of Arts in dance from Columbia College Chicago, Malnar performed with repertory company Jump Rhythm Jazz Project where she received an Emmy Award for her work in the award winning documentary Jump Rhythm Jazz Project: Getting There. Malnar also did a lengthy stint with Mark Yonally in the avant-garde Chicago Tap Theatre. After more than 10 years of teaching and performing in the Windy City, Malnar’s feet started to itch and she felt she was “ready to get out of the snow.”

Malnar made the jump to New Orleans almost five years ago on the advice of friends, and she was a little shocked to discover the tap community here was practically non-existent. “I knew immediately that was what I wanted to do,” she says. “I wanted to build a tap community with the people who were already down here doing it by themselves.” Through her contagious and vibrant personality, Malnar persevered and created Theatre On Tap, the premier rhythm and tap company of New Orleans whose mission is to “celebrate, promote and preserve America’s indigenous dance form in the birthplace of jazz.”

Since opening, Malnar’s Theatre On Tap has put on three different productions: Hoofing for Heroes, Neutral Ground: Where the Sounds of New Orleans and Rhythm Tap Collide and Love TAPS: An Evening of Romance & Rhythm. This year, the company will offer another run of Hoofing for Heroes at the New Orleans Center for Creative Arts inside Lupin Hall on Memorial Day Weekend (May 26-28) with a portion of the proceeds going to The Wounded Warrior Project. “For me, it’s the most meaningful show that we do,” Malnar says.

Theatre On Tap also offers community tap classes to teenagers and adults, but this year will be the first time they will be offering classes for kids. “Most of our community students are adults, just sort of by default.” Malnar says. “But I kept getting requests about offering classes for kids, so this summer we’re starting something called Camp Rhythm.” Launching this summer, Camp Rhythm will feature two sessions, the first starting June 13 and the second starting July 11, both of which will be held at Uptown studio NOLA Spaces on Toledano Street. Designed to immerse children ages 6 to 10 into the full rhythm experience, the camp will provide engaging, hands-on lessons in tap dancing, singing, body percussion, improvisation and even the crafting of homemade instruments.

Malnar and her company are truly excited to share their expertise with kids. She likens the power of tap to a disease, albeit a joyous one. “I think it’s very difficult for people to watch tap dancing and not feel something,” Malnar says. “The energy is very contagious, and, even though you might not know exactly what people are doing, you can feel it and connect to it on an energetic level.” theatreontap.com