Libations for Locals: Game On!

September brings to mind many things, from leaves changing color to the start of a whole new school year, but, in New Orleans (and possibly all of Louisiana), this time of year can only mean one thing … another season of Saints football! Don your black and gold, and discover these sports bars where you can get your game on. 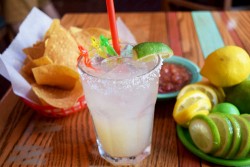 Lucy’s Retired Surfers Bar & Restaurant
Likely one of the rowdiest spots in the Warehouse District, especially after 5 p.m. weekdays, Lucy’s Retired Surfers Bar & Restaurant is the perfect spot to catch the game. Located on the corner of Tchoupitoulas and Girod streets, this quirky beach-themed locale offers a number of flat-screen TVs, a good selection of beers on tap (as well as bottled), sturdy Cal-Mex/Tex-Mex cuisine and killer margaritas. Score a spot at the bar or call dibs on one of the rare, barroom tables; order a pile of chips and salsa; and sip on a Lucy’s Classic Margarita — or go crazy with a Shark Attack, featuring vodka, gin, rum tequila “and the blood of a few innocent victims.” 701 Tchoupitoulas St., (504) 523-8995, lucysretiredsurfers.com

Mid City Yacht Club
As large as a barn, and the same approximate color, the Mid City Yacht Club was renovated into a welcoming neighborhood bar about a year after Hurricane Katrina. Found on the corner of South St. Patrick and Baudin streets, the building originally housed Savaggio’s Grocery in the 1930s, but, over the years, it morphed into a bar catering to the community and the players from the softball park across the street. With TVs both inside and out, it doesn’t matter if you’re in the courtyard or the boathouse, you’ll find just the right seat to watch the game. The bar offers a wide selection of beers on tap, including 10-ounce “craft draughts,” and quite a few bottled beers, both imported and domestic. Mid City Yacht Club also offers a small, but appropriate bar menu where a hungry Saints fan can score a burger or a signature sandwich like BBQ Chicken & Bacon. 440 South St. Patrick St., (504) 483-2517, midcityyachtclub.com

The Bulldog Uptown
Likely one of the most iconic Uptown bars in the city, The Bulldog has long been the gathering spot for college students, beer aficionados, sports fans and people looking for a good spot to grub. The Magazine Street bar offers over 45 draught and 100 bottled brews from all over the world, which includes a good selection of local and craft beers as well. Kick back on the patio under trees with twinkling white lights (don’t forget to bring your best four-footed pal), and root for the Saints — all while slurping a Parish Envie Pale Ale or some other favorite brew. The Bulldog also offers hearty bar fare like the famous quesadillas or a pile of Amber Fries — straight-cut or seasoned waffle fries smothered in cheese. 3236 Magazine St., (504) 891-1516, bulldog.draftfreak.com

Bayou Burger & Sports Company
Open less than four years, the Bayou Burger & Sports Company is located on world-famous Bourbon Street in the French Quarter. Offering “360 degrees of HDTV,” you won’t miss a moment of football action — whether you’re ordering another round at the bar or vigorously discussing the last play. Bayou Burger offers a hefty list of local and domestic beers and a New Orleans-inspired menu with items like Crawfish Beignets, Gator Traps (panko-breaded alligator with jalapeño cheese stuffing) and 15 different burgers. It will likely take several trips, but you can try everything from The Thai Breaker with a Gulf-shrimp patty to Dat’s Bologna with ground beef, thick-cut bologna, grilled onions and garlic mayo. 503 Bourbon St., (504) 529-4256, bayouburger.com