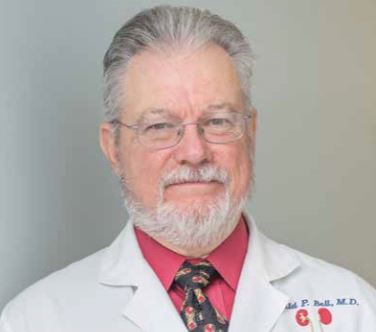 According to the American Cancer Society, prostate cancer is the second leading cause of cancer death in American men, behind lung cancer. In 2018, it is predicted that for every 41 men, one will die of prostate cancer. “The good news is that the five-year survival rate is nearly 100 percent,” says Dr. Donald Bell, a board-certified urologist at East Jefferson General Hospital and Clinical Assistant Professor of Urology at LSU School of Medicine.

Dr. Bell, who has practiced medicine for 33 years, explains the extraordinary advances in the diagnosis and treatment of prostate cancer. “In the ’80s, there was a significant increase in the earlier detection of prostate cancer due to PSA (prostate-specific antigen) testing,” he says. “Previously the diagnosis was often made after the cancer had metastasized (spread to other areas. In addition, PSA testing led to over treatment of non-fatal prostate cancer with potential complications, including increased risk of impotence and incontinence.”

Prostate cancer forms in tissues of the prostate (a gland in the male reproductive system, which is located below the bladder and in front of the rectum). The disease, which usually occurs in older men, grows relatively slowly. “At East Jefferson, our patients undergo PSA screening and digital rectum examination,” Dr. Bell says. “If we see an abnormality, we will use an MRI and biopsy to categorize the stage of the disease in order to determine the best treatment.”

RISK
Factors that increase the risk of prostate cancer include older age, a family history of the disease, and race. Approximately 99 percent of cases occur in males over the age of 50. “Prostate cancer is two to three times more prevalent in men who have a first-degree relative with prostate cancer,” Dr. Bell explains. “No single gene is responsible for prostate cancer, however mutations in BRCA1 and BRCA2 have been implicated.”

SYMPTOMS
“Unfortunately, early prostate cancer usually has no clear symptoms,” Dr. Bell says. “Some men experience a slower urinary stream or more frequent urination. In the later stages of prostate cancer, symptoms may include increased urination at night, difficulty with starting and maintaining a steady stream of urine, blood in the urine and painful urination. Late symptoms may also include fatigue, weight loss and bone pain.”

TREATMENT OPTIONS
Up until the ’90s, if the prostate exam revealed abnormalities, tissue was removed and sent to pathology. According to Dr. Bell, back then, more than 50 percent of those with cancer already had metastatic disease and were then treated with hormone and/or radiation therapy. The options for hormone therapy included medical or surgical castration or treatment with estrogen. Now standard treatment options include active surveillance, surgery, radiation therapy, hormonal therapy, chemotherapy, biologic therapy, bisphosphonate therapy and targeted therapy. These treatments are generally used one at a time, although in some cases they may be combined.

“Radiation therapy has traditionally incurred complications, such as urinary incontinence, urinary leakage and impotence,” Dr. Bell says. “We are now utilizing a gelatin spacer to decrease those side effects. With the use of robotics, we can perform minimally invasive surgery, and decrease blood loss and improve outcomes.”

For more advanced cases in which the disease has spread to the bones, pain medications, bisphosphonates and targeted therapy are also useful. “At EJ, we seek to improve quality of life and decrease complications related to therapy,” Dr. Bell says. “It is important to note that for the patients that have a less aggressive form of prostate cancer, we will provide active surveillance instead of immediately opting for treatment. If the biopsy shows a more aggressive form, then we will perform radical surgery or start radiation treatments immediately. Because radiation has become far more refined and targeted, we are less likely to damage surrounding structures particularly with the use of the Space Oar gelatin implant to further separate the prostate and rectum.”

FOLLOW UP
It’s in extending the lifespan of men with advanced cancer that the most exciting developments are taking place. High risk patients are monitored every three to six months in the first five years, then checked annually. “The treatment of prostate cancer has improved dramatically,” Dr. Bell says. “Traditional PET scans did not reveal the reoccurrence of cancer. Now with Axumin (a diagnostic imaging agent for use in PET imaging), we can identify suspected sites for reoccurrence and do a better job at concentrating the treatment at the source of the recurrence.”

East Jefferson General Hospital utilizes a multidisciplinary approach in treating prostate cancer from early diagnosis to end of life. “We have a urologist, radiation therapist/oncologist, radiologist, medical oncologist, social workers and a palliative care team in place that ensures optimal communication and coordination of care,” Dr. Bell says. It is no coincidence that EJGH has received accolades from two independent hospital rating agencies. The Leapfrog Group gave EJGH an A rating for the past three years and CareChex rated EJGH as No. 1 in overall hospital care in Louisiana and No. 10 in the United States.