Having A Moment With Someday 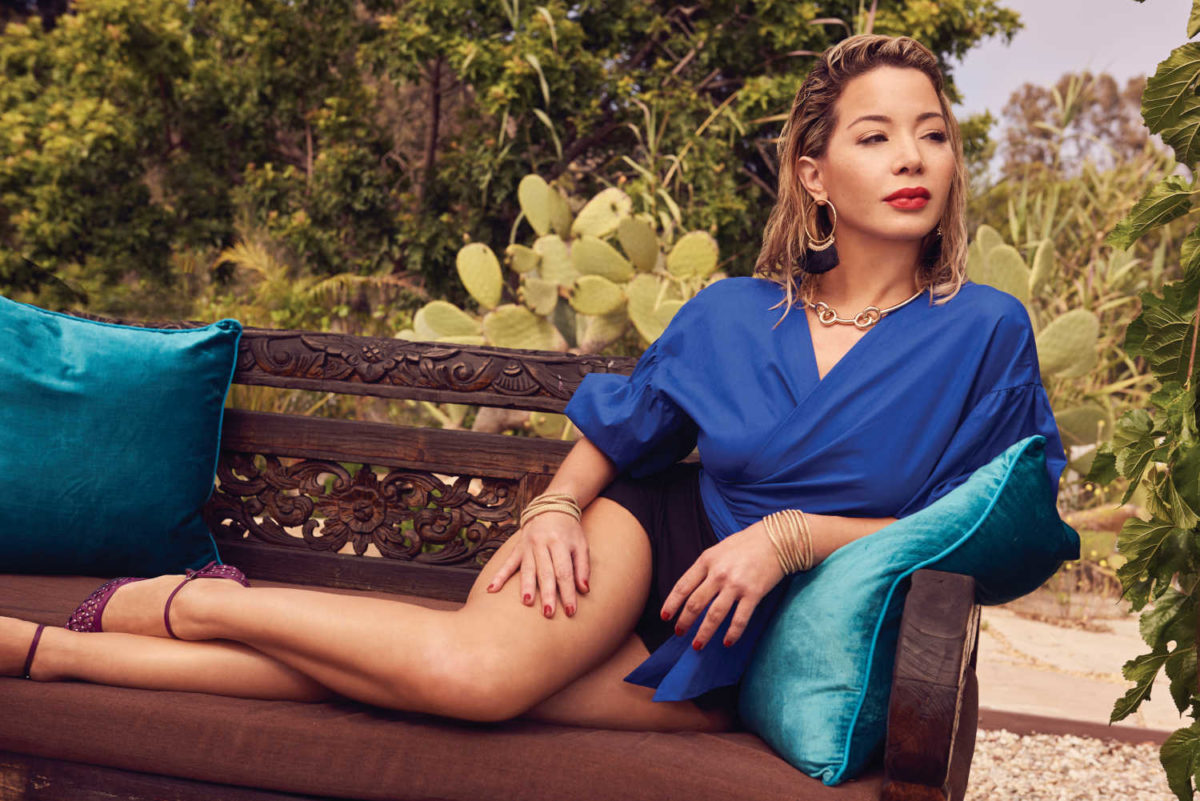 Katherine Castro is having quite a moment. The gorgeous and gregarious actress and producer, and her fellow filmmakers, put passion and dedication into making the short film Someday, a unique love story about two strangers who meet on a 14-hour flight from Sydney to Los Angeles. Someday stars Castro as Melody, a passenger who doesn’t recognize her flight companion Adam, (played by Chris Santos of The Girlfriend Experience), a world-famous composer seated next to her. During their travels, they pour their hearts out to each other and make a beautiful connection, made even more special because of its fleeting nature. Someday, helmed by award-winning director and writer J.S. Mayank, has earned acclaim from the film community and accolades on the film festival circuit, and Castro is awestruck by the response.

“You make a movie never knowing how it’ll be received, so to see that people love Someday is the best feeling,” Castro says. “In July we won first place for Best Short in the Dominicans in the Diaspora category at the Dominican Film Festival in New York. It was humbling and overwhelming to be awarded by my fellow Dominican filmmaking community. After the screening it was nice to hear people say how beautiful it was and how they’ve had a similar connection with someone where they feel like they’ve known each other forever, to the point that they are calling it a Someday moment. And a filmmaker I admire greatly said it felt like a painting made into a movie. I wasn’t expecting to win first place, and the audience’s response was the cherry on top.”

Along with producing and starring in Someday, Castro received writing credit for the film. “I’m a co-writer because the story stems from an experience I had,” Castro says. “I met someone very famous on a plane and had zero clue who he was. We spent the entire flight talking and had this amazing connection. The writer and director of Someday, J.S. Mayank, is phenomenally talented; we worked together on a previous project of his and we always talked about doing something else. Even before it happened to me, I thought it’d be interesting to make a movie about two people who meet on a plane and have this romance of the mind that lasts the length of the flight, and years later it happened to me!”

Someday has also won Best Romantic Comedy at the Global Film Festival Awards and it was nominated at the Romford Film Festival in the Best Short category. And at the Los Angeles Film Awards, Castro won Best Actress in an Indie Film.

“Someday has been embraced around the world,” Castro says. “It’s been presented in the United Kingdom, Budapest, Paris, Berlin, Toronto, New York and at other film festivals in the United States. I am also very excited that Someday is an official selection for the DTLA [Downtown Los Angeles Film Festival] in October.”

Castro hopes to expand Someday into a feature film. “Of course we love stories about struggles going on in politics and society, but we also need lighter stories that give us hope, and make us feel good and uplifted, when walking out of the theater,” Castro says. “There’s many negative things going on in the world. We need to create stories about wonderful things and give the human spirit a break. I love what I do. I want to tell stories that might touch someone’s life.”

Other roles of Castro’s include producing and playing a female sniper assassin in The Social Contract, which required her to be very physical and in top shape. “It took three months of training with a fight choreographer, and we didn’t use stunt doubles,” Castro says. In The Summoning, a dramatic mystery thriller based on a true story, Castro plays Jess alongside actors such as Eric Roberts. She stars as Martha in the comedy DWB: Dating While Black and as Isabella in the crime drama American Violence (a movie for which she is also an executive producer). In El Gallo, an action crime drama filmed in the Dominican Republic and directed by acclaimed actor Juan Fernández de Alarcon, Castro stars as La Veterana. And in the action crime thriller MAMBA, Castro stars as M and is an executive producer of the short film. “MAMBA is winning awards at film festivals, which is very exciting,” Castro says.

A native of Santo Domingo, Castro and her three brothers were born into a loving, close-knit family. “My dad was a two-star general in the Dominican Republic; he was the chief of the secret service and one of the most respected men in the military back when he was active and still today,” Castro says. “My brothers are all pilots in the military and we’ve been riding on helicopters since I was a kid, mostly piloted by my dad. It’s really cool to go to the Dominican Republic and do film location scouting and have one of my brothers be the pilot. Growing up in a military family gave me discipline and the idea that giving up is not an option. I got love and unwavering support from my mom, my dad and my brothers. They are my No. 1 fans.”

As a child, Castro danced, did gymnastics and practiced music. At the age of 2, she knew she wanted to be an entertainer. By age 5, she was performing onstage when her family lived in the United States. “Of course anytime anyone came to my house, I had to play the piano or the guitar and sing a song,” Castro says. “It was proud parents showing off their child. But it all came from love. When we lived in the United States, we went to competitions and judges would say I was the next Rita Moreno. Back then I didn’t know who Rita Moreno was, but now I understand what a huge compliment it is.”

Old-school Hollywood movies made a big impression on Castro. “In dance classes they’d show us the movies of Fred Astaire and Judy Garland; I remember seeing Singin’ in the Rain, The Wizard of Oz and Grease,” Castro says. “When I saw these movies that’s when I knew I wanted to do film. E.T. the Extra-Terrestrial was also a major influence. I really wanted to be friends with the little alien. I was like ‘Okay, I’ll be an actress so I can be friends with E.T.’”

“When I moved back to the Dominican Republic, I did TV because although now the film industry there has boomed, there wasn’t a film industry when I started out,” says Castro, who became a popular actress in her homeland and starred in commercials at age 15. A natural on air, Castro landed on El Sótano, a daily national variety show at age 17. She also hosted Música en 1/4 de Hora for Show Del Mediodía and A MIL, a weekly variety entertainment show, and was honored to work opposite beloved Dominican TV personality Freddy Beras Goico on his late night show Punto Final. “He was an icon, like the Johnny Carson of the Dominican Republic, who revolutionized the way television was made there,” Castro says.

An intelligent woman of many accomplishments, Castro was recognized as one of NBC Latino’s Top 10 Standout Latinos at Sundance. “That was a big surprise — a nice shout out from them,” Castro says. Another breakthrough for Castro was receiving the Hollywood F.A.M.E. Award. She was also awarded by the Women in Film Association in the Dominican Republic and she is an Arts Circle Member of Film Independent, a non-profit that serves independent filmmakers.

To maintain her fabulous shape and to get an adrenaline rush, Castro enjoys dancing, Pilates, Capoeira, aerial silk trapeze, extreme martial arts and acrobatic gymnastics. She has an Olympic-sized trampoline in her backyard. “I work on my flips,” Castro says. “I don’t want to say I want to do all of my stunts, just as many as possible.”

Castro also holds a degree in Journalism and speaks English, Spanish, French, Portuguese and Arabic. Being multilingual gets her considered for a larger range of roles. “The fun part of being an actor is transforming yourself into people completely different from you,” says Castro, who doesn’t always get cast as a Latina girl. “The stereotypical way that a Latina is supposed to look is changing in the industry. Now they know we come in all shapes and colors and are a mix of Africans, Europeans, the indigenous people of our land and everything in between. That’s what a Latina is.”

The lovable Latina has New Orleans on her travel bucket list. “I’m dying to go to New Orleans,” Castro says. “I can see the Caribbean influence on New Orleans for sure. You can tell the people in New Orleans are lively and warm, and that’s beautiful. I want to go to New Orleans for the music and the food, and the spices — oh, I love spices. I have some amazing actor friends in Louisiana that I want to visit, and I definitely want to enjoy Mardi Gras; we do a similar thing in the Dominican Republic. And New Orleans is an amazing place to film with the beautiful scenery there. The city itself is quite a character.”

The Caribbean actress who lives in Los Angeles is active with PETA and loves eating vegetarian. “I am 100 percent an animal lover,” Castro says. “I love dogs and all animals. I grew up with animals; they are family. We had chickens, goats, cows and dogs, Dobermans, Chihuahuas, a Pomeranian, a Labrador. I can’t stand animal suffering. I’m involved with the World Wildlife Fund. The poaching in Africa of rhinos, elephants and lions is really sad. I hope I can make a difference. We need to keep raising our voices and shift the human conscience.”

Castro supports the Louisiana SPCA, which will hold the 9th annual NOLA on Tap Beer Fest, its largest fundraiser of the year, Sept. 22 at New Orleans City Park’s Festival Grounds. “I’m not for buying dogs at a pet store,” Castro says. “There are so many wonderful animals needing homes that you can adopt, and they make a great addition to your family. Dogs who’ve been mistreated get rescued and recover from the trauma and are so forgiving. They give love to people who rescue them. They actually make people’s lives happier, and they love unconditionally. All they want is to give and receive love. Isn’t that amazing?” katherinecastro.com, @officialkatherinecastro, @katcastroo