More local companies are selling eco-friendly products, as a way to help the planet and their bottom line

The push to “go green” is becoming more than a just a political slogan for consumers looking for ways to align their buying habits with their love of the environment.

Retailers are responding with more earth-friendly products, packaging and business practices that have a reduced impact on the planet. Whether it’s Whole Foods Market shelving plastic bags in favor of paper or Wal-mart touting energy-efficient compact fluorescent bulbs, green retailing or “greentailing” is having an impact on the country’s largest companies.
Here in New Orleans, the trend is taking root in both retail shops and the housing industry as residents seek out more energy-efficient and environmentally sustainable ways to rebuild their homes following Hurricane Katrina. 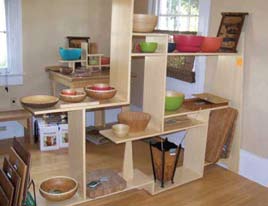 Michael Ward opened New Orleans Bamboo more than two years ago when he saw a need for a local supplier of sustainable building products made of bamboo, cork and recycled materials. “We only sell renewable resource products,” Ward says. “We drew a pretty hard line when we started.”
Bamboo is just as hard as oak and can be used for flooring, furniture, plywood and countertops. Unlike oak, which can take at least 20 years to grow and replenish, bamboo rapidly grows, reaching a harvestable height within a few years. Species that are used for flooring can grow as high as 70 feet, Ward says.
New Orleans Bamboo’s showroom, located at 6065 Magazine St., features bamboo flooring samples, bamboo plywood, bamboo fiber shag rugs, bamboo window shades and even bamboo bowls and kitchenware. The products are made without formaldehyde or other harsh chemicals and preservatives.
Cork, which is derived from tree bark, is another sustainable building resource because it can be harvested without killing trees. New Orleans Bamboo features cork flooring, tile and countertops.
Ward says his green business is about following principals, not trends. “I wanted to make a change in my life and in our planet,” he says.
That’s a philosophy that is driving his sales, which he says have grown steadily since he opened in January 2007. Bamboo and sustainable resource products typically cost about 50 percent more than traditional material.

A Retailing Trend
A recent study by the nation’s largest retail trade group, the National Retail Federation, showed that more than 70 percent of consumers consider environmental or green factors when they make their buying decisions. The same study showed that almost 50 percent sought out stores last year specifically because their products and business practices were more eco-friendly.
“Greentailing” and “sustainability” are going to be major retail trends across the country even in today’s challenging economic times, says Dan Butler, National Retail Federation vice president of Merchandising and Retail Operations.
“It’s still a relatively new frontier in the world of retail, but I think that green initiatives are here to stay,” Butler says. “When Al Gore’s movie An Inconvenient Truth came out [in 2006], it shifted a lot of thinking.”

Eco-friendly Flip-flops
The movie plus Generation Y’s embrace of social responsibility has helped bring sustainability into the mainstream. Kyle Berner, owner of New Orleans–based Feelgoodz, says today’s youth want to feel good about the companies and products they support.
The 28-year-old started Feelgoodz to sell eco-friendly flip-flops made of fair-trade rubber from Thailand. The biodegradable and recyclable products are the only 100 percent eco-friendly flip-flop sold in the country, says Berner who also donates 3 percent of his profits to environmental, fair-trade and micro-finance organizations.
“People have a choice to buy a more environmentally sound product,” he says. “When you buy our green product, you’re making a responsible buying decision, but you’re also investing in fair trade and micro-finance.”
Feelgoodz supports Kiva.org a micro-finance nonprofit that makes small loans to business owners in developing countries. It also supports fair trade organizations in

Phitsanulok, the Thai city where its products are sourced. Berner calls the concept his triple bottom-line business model—people, planet and profit.
Feelgoodz sells its flip-flops online and at area retailers for about $20 a pair. Berner started out with 300 pairs last summer and has been restocking steadily, ordering an additional 4,000 over the course of six months. He says Feelgoodz’s green bona fides are what set it apart. “I think that initially people want to support the brand and the cause that we set forth, but once they try on the product, they like it even more,” he says.
That green-marketing push is the key to his success, but he cautions that companies have to back up their credos with their business practices or risk alienating customers. “There needs to be a strong element of sincerity,” he says.

Soy Insulation
Also, green arguments have their limitations for some consumers. Green Bean Insulation is a New Orleans company that uses eco-friendly soy for its spray foam insulation. Owner Kurt Buchert says his product is sprayed using water pressure instead of CFCs, is from a natural, renewable source and doesn’t contain formaldehyde. He says “green”—as in dollars saved—is the true driver of business, not soy. More people are interested in the product’s ability to reduce energy costs by 50 percent.
“Typically people in New Orleans are looking at energy efficiency. When you start talking about the green part of manufacturing a product, people still aren’t as aware,” he says. “It’s definitely kind of a lagniappe thing.”

461
previous Bank On It
next The Tide Turns