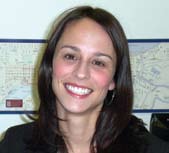 ago. She earned a doctorate in sociology at Tulane, was chosen as one of five ambitious young people to join the city’s Mayoral Fellowship program, worked for a short time under former film commissioner Stephanie Durant, and in January 2007 was appointed director of the New Orleans Office of Film and Video.

What’s in store for the local film industry in 2009?
This spring we have Imagination Movers shooting [its second season], the David Simon HBO pilot Treme [starring Steve Zahn and native Wendell Pierce], two independent features in pre-production, Dead of Night and Leonie. And we also have two major studio features that are prepping right now: Jonah Hex [with Josh Brolin and John Malkovich] and The Expendables [with director Sylvester Stallone, starring Mickey Rourke].

Not only are we home to a full slate of feature film and television projects, but we see a lot of episodic television shows that are featured on the Food Network or the Travel Channel. We also work with still photography projects. [And] see a significant amount of commercial activity.

What is the city doing to lure filmmakers and their projects here?
We love our feature films, they dump a lot of money into the economy, they’re very high profile and we enjoy the earned media benefits from those types of projects, but we realize that commercials are a great source of revenue [and] subset of the market that we really need to play up. We attend a handful of trade shows every year. April 15 to 19 we’ll be traveling to Los Angeles for the Locations Trade Show. In addition, we are starting to do more targeted marketing; I’ll be going to New York, meeting with commercial producers and agencies and getting the word out about New Orleans.

Over the last year, we’ve had six new and expanded businesses open in the greater New Orleans region that specifically service the film industry. It’s really those concrete resources—the crew base, the hotels, transportation, equipment [that are most important].

What are those new businesses?
Hollywood Trucks and Set Technologies. Those two companies actually went into a partnership. We’ve been involved with an initiative to engage our local musicians and connect them with film opportunities; we’ve looked for ways to connect visual artists with job opportunities. So one of the most exciting next steps is looking at post-production capabilities. Already open is Maison Post, and [filmmakers] Michael Arata and Peter Hoffman of Seven Arts Pictures are opening an additional post house. Lighting Bayou is another company; they provide equipment to productions. There’s also a company called Green Clean, which provides environmentally friendly clean up of film shoots.

How important are small local film festivals to the industry?
They are extremely important because the whole point of the [tax] incentive program is to generate or to foster and cultivate an indigenous and creative industry. And that does not happen with Warner Bros., Universal, and Fox coming in and then going back to California. So encouraging our local filmmakers is one of the most important things we can do.

What we’ve done is launch a letter-writing campaign asking crew members, business people and residents who are in support of the industry, to write letters stating that they want our lawmakers and legislators to stabilize the credits. Right now there are 40-plus states offering incentive packages; our biggest competition is the State of Georgia. They offer 30 percent [tax credits], which is 5 percent higher than we do. We’d like to remain competitive, and keep the additional 10 percent for Louisiana labor. Right now the way the legislation stands, at the beginning of 2010, [the credit] is supposed to go down to 20 percent. That would be extremely damaging to our market. This industry is a catalyst for so many other aspects of the creative economy. Film is the core, but it’s a platform for so much more.

To learn more about the film commission and to help in their lobbying efforts, visit www.filmneworleans.org.