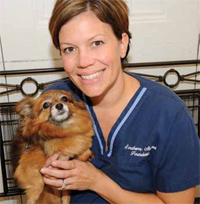 Elizabeth Sprang, the assistant director of the Southern Animal Foundation, was raised to care for animals. Her mother, Anne Bell, started the nonprofit in 1995. In 2002, a fire destroyed Bell’s grooming and boarding business in the Lower Garden District, but a year later she and her daughter rebuilt the property as a no-kill shelter and full-service, low-cost veterinary clinic. Last summer, Southern Animal Foundation received a grant from PetSmart Charities to launch Spay NOLA, a program that spays and neuters cats for $20 and dogs up to sixty pounds for $50.

What need does Southern Animal Foundation serve in New Orleans?

Who can use your clinic?

Everybody. No geographic restrictions, no financial restrictions. We have people that come from as far away as Morgan City, Lafayette and Mississippi. A four-hour drive here for a surgery, with gas and all, is still less expensive than having it done in their town.

Is payment based on income?

On average, how much cheaper is the Southern Animal Foundation than a regular vet?

On the majority of services, we’re at least half.

How do other vets feel about that?

Most of the people that come into my clinic don’t have a lot of money. They’re not the ones who are going to go to a regular vet. And the overwhelming majority of vets support what we do, because they see that our spay and neuter program has significantly diminished the number of animals being euthanized.

Southern Animal Foundation is also a no-kill shelter. Where do the animals come from?

The staff picks up a lot. People come in for a service and just leave them. A lot of times it’s an abusive owner that comes in and we gently encourage them to sign the dog over.

What attitudes do you find among pet owners in New Orleans?

I would say the overwhelming majority just don’t care. It’s not an issue of race, money or anything. I’ve heard doctors say they’re going to turn a dog loose in the country and he won’t find his way home. Or he’s old, we’re just going to take him out in the woods and shoot him. It’s like a pet is disposable. A pet is replaceable. It’s just like an object. I’ve had guys, these thugs, tell me that pit bulls don’t feel pain when they fight. I say, step on his toe and see what he does. He’s going to cry. Those dogs don’t start off mean. They make them mean. When you’re mean to the dog every day of its life, and you’re blowing cocaine up its nose, and putting it on a treadmill with bricks or tires around its neck, that’s going to make it mean. I’d be mean too.

Why is the Spay NOLA program important?

Spay NOLA is the only program of its kind in New Orleans. Even the SPCA doesn’t have a program like Spay NOLA. The homeless animal rate in New Orleans is probably the highest in the United States.

Why do people resist having their pets fixed?

There are a lot of misconceptions. People think the animals are going to get fat, they are going to get lazy, or they’re not going to be a good guard dog. People don’t understand the medical benefits far outweigh anything else. Female dogs that aren’t spayed can get an infected uterus, or they can get breast cancers. We removed six tumors from the mammary chain of a dog the other day. The male dogs get prostate problems and testicular cancer.

Will we ever get the animal population under control in New Orleans?

I think we’re making a big drop in it now, but I don’t think we’ll ever have shelters that are empty. Since Spay NOLA started last July, we’ve done over 10,000 animals. After Katrina, we started a low-cost program, although Spay NOLA costs a lot less. I would say since Katrina, we have fixed 30,000 animals.

What keeps you motivated each day?

It has to be in you. It’s just this compassion. I feel like this is my goal in life. It’s my destiny. I really do.

Is there one thing you wish more pet owners did?

Spay and neuter. And just put the dog inside on a hot day. When it’s freezing cold, don’t leave it outside. I’m not saying everyone has to give their pets human qualities, like we do, but treat them with a little bit of respect. And let’s face it, compassion for animals breeds compassion for people.

For more information about the Southern Animal Foundation, visit www.southernanimalfoundation.org.

385
previous Call to Order
next Is Your Pet Pudgy?