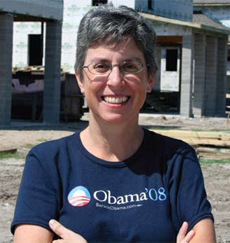 Without the fanfare of a celebrity philanthropist, Leonard Riggio, the chairman of Barnes & Noble, and his wife, Louise, are building houses for low-income New Orleanians whose homes flooded when the levees failed. The organization they founded and funded, Project Home Again, first built 20 energy-efficient homes on a large, undeveloped piece of property on St. Bernard Avenue. The Riggios then completed a dozen more on lots throughout Gentilly and are currently building 12 more. Carey Shea, the executive director of Project Home Again, spoke to New Orleans Living about how the program works and its long-term goals in our city.
What prompted Leonard and Louise Riggio to create Project Home Again?
In the days after Katrina when, like millions of other Americans, they saw the chaos and devastation, the people on their roofs begging for their lives, they were profoundly affected. They decided to help, and they wanted to help in a big way. So they designed a program, Project Home Again, that would build high-quality, energy-efficient houses for people who had been unable to get back into their own homes.
Why focus on the Gentilly neighborhood?
We fell in love with Gentilly immediately. We loved that it is a solid, working-class neighborhood. We love that it is racially integrated. People in Gentilly live there because they want to live there, not because they have to live there.
How does the program work?
Anybody who gets one of our homes has to trade in their old home, it’s sort of like Cash for Clunkers. We give people the opportunity to move to an area that is being rehabbed, where there are neighbors, where at night when the sun sets there are lights on at other houses. Then we get the blighted the property. We tear down the damaged house, we clean the property, and then decide whether it is a good lot for us to build on. If we decide that it isn’t a “buildable” lot, we have an innovative and wonderful deal with [the New Orleans Redevelopment Authority].
We trade the unbuildable lot to NORA in exchange for one in Gentilly’s St. Anthony neighborhood, where we are concentrating our building efforts now.
What makes a lot unbuildable?
We look at a number of things. We look to see if at least 40 percent of the houses on a particular block are reoccupied. We look at the size and shape of the lot. We’ve gotten lots that are really only 18 or 20 feet wide, and you cannot build a modern house there because of today’s required setbacks. When we trade these in to NORA, they are obligated to first offer them to neighbors as “lots next door.” These unbuildable properties can be used by neighbors as side yards. In effect, for every one house we build, we remedy the blight on two lots.
Many New Orleans families have lived in their homes for generations. Were people reluctant to trade in their houses?
I think initially, years ago, it probably was difficult. For a lot of people who had great aspirations right after the storm of returning to their home. However, the reality has set in. Not everybody has come back, the streets are dark at night and the houses aren’t elevated to a safe height. When folks saw the beautiful and well-built houses that we were building and weighed what we offered against their continued struggle to get back into their homes, obviously 32 of them have decided they would rather move into a nice Project Home Again home and keep their family safe.
The new homeowners are given a mortgage that is forgiven over five years. Why structure the program in that way?
We wanted to make sure that people who were receiving these homes were committed and would put in a five-year residency. So the mortgage enforces that. We also write into the mortgage that folks have to maintain full homeowners and flood insurance on the property. And they have to promise to maintain the property to the highest standards, which they all do.
How many houses does Project Home Again plan to build in New Orleans?
We would like to build a lot more, and we’re looking for partners. Before the Riggio Foundation underwrote the entire project, although we did have one very generous donation early from the Winingder family, who sold us the original lot. Now we’ve perfected the model. We build these houses cost effectively. We’re able to acquire land from NORA at a minimal cost. Now that we have this tight, streamlined model, we’re beginning to solicit funding. If we’re able to couple our funds with other funds, we’ll continue to build for a long time.
For more information about Project Home Again, visit www.projecthomeagain.net.
602
previous Agent of Change
next The Cycle of Life