Steps in the Right Direction

Ochsner helps its employees save money while getting in shape 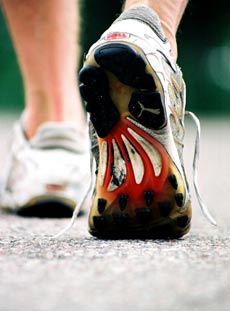 Recognizing the truth in the old adage, “An ounce of prevention is worth a pound of cure,” health insurance companies generally charge less to insure healthy people than those at risk for developing chronic conditions. For employers who buy insurance, a healthy workforce translates into lower insurance premiums, not to mention fewer sick days taken as well as higher employee productivity and morale.

To encourage their employees to stay healthy, employers nationwide have begun to adopt pay-for-prevention programs, which offer monetary incentives to workers who demonstrate that they live a healthy lifestyle. In Louisiana, Ochsner Health System, which is the largest employer in the state, is one organization that has jumped on board.

“Our program pays people to stay healthy,” says Dorothy Cain, system coordinator of Ochsner’s employee wellness program. “For employees that participate and meet the benchmarks, we reduce the amount of health insurance premiums they pay each month.”

Employers normally don’t develop pay-for-prevention programs in-house but instead sign up with third-party providers to run them. Ochsner’s provider is Virgin HealthMiles, a division of the well-known Virgin Group, founded by Richard Branson.

“We chose Virgin because they have an excellent software platform. We needed that because Ochsner is spread out over eight hospitals and 35 clinics,” Cain says. “Also, we liked that the program builds in accountability. Other programs rely more on employees’ self-reporting of accomplishments, but Virgin’s is electronic.”

Participants in the Virgin HealthMiles program need to wear a special pedometer and tally between 7,000 and 10,000 steps a day. Although 7,000 steps total about three miles in actuality, employees who walk that much earn 60 so-called “health miles.” If they walk 10,000 steps in a day, they earn 100 health miles. The insurance reduction kicks in when 18,000 health miles are earned in a year and applied to the following year’s premiums. Participants log the health miles into the Virgin system by plugging their pedometers into any computer with a USB port and an Internet connection. The data is automatically uploaded.

The pedometer works on vibrations, a feature that allows the steps to be accrued through a variety of physical activities—either through obvious ones like walking and jogging or less obvious activities such as bicycling and basketball. Heart-rate monitors can be used for swimming and other sports or if the participant simply prefers that over a pedometer.

In addition to the steps, another requirement of the program includes check-ins at Virgin’s HealthZone Kiosks four times a year. Ochsner has 10 kiosks throughout the hospital system and portable ones that rotate between smaller clinics. After logging in using a touch screen, the participant is weighed by the kiosk, which also takes measurements for blood pressure and the person’s body mass index (BMI). The participant needs to maintain or improve his stats to earn the rewards.

All this can be monitored on a LifeZone Web site. When people log into their Web page, they get a snapshot of their steps walked, calories burned and goals reached. To spur support and friendly competition, the Web site allows participants to challenge one another. For example, someone might set up a challenge to walk the most number of steps in a two-week period, and the winner has to take the other out to lunch. Challenges have been set up between Ochsner departments (say, Cardiology against Orthopedics) and even other institutions. During the ramp-up to the Saints vs. Colts Super Bowl, Ochsner and a hospital in Indiana engaged in a number-of-steps challenge. (The Indiana hospital won this challenge, but New Orleans, of course, won the big one.)

According to Cain, the program has been a great success. It was rolled out in 2009, and within two weeks almost half of Ochsner employees had signed up. “Our program before this one had only a 30 to 40 percent participation rate. Now, we’re at 81 percent,” she says. “Over half of those who take part reach the goals. Also, 82 percent of those participating maintained or lowered blood pressure last year, and 89 percent lowered or maintained their BMI.”

Cain herself participates, too. Even though by April she had already passed the goal of accruing 18,000 health miles by July 31, she still wears her pedometer and logs her steps into the system.

“The program is successful because it’s so fun and interactive,” she says. “The old program we had was labor-intensive. You had manually keep track of your progress. It’s easier and more fun just to upload your steps into the computer. Also, people like the incentives and the social-networking aspects. That’s where people are at. I believe that programs like this one are the wave of the future.”