Remembering two historic days, 9/11 and 8/29, by looking at the images that captured them 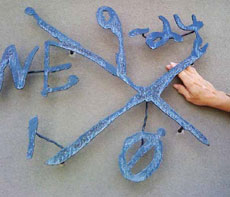 Anniversaries. I don’t need a calendar to remind me. I think about September 10, 2001, all the time. How I lived my life, where I lived my life, my politics, and my view of the world nine years ago.

Today everything is radically different, and I live day to day in a different city in my own completely different post-9/11 mindset. As we approach the five-year anniversary of Katrina, I constantly fall into conversations about August 28, 2005, the day before “the Storm.” The sun was shining. No one really had a clue of what was to come. The next day, the hurricane hit, then the levees broke and thousands of people and possessions washed away in the catastrophic flood. Worlds changed forever.

On September 10, 2001, I was living in New York City and working for the Associated Press. That day I was at the New York Stock Exchange reporting on the volatile market. At about 3 p.m., I took a short break before the closing bell rang, got lunch from Cosi sandwich bar and sat outside in the shadow of the herculean Twin Towers.

In 2008, I moved to New Orleans to host a radio show. I felt an instant connection to the people here. They understand, like I do, how fragile the world is.

For example, at 8:42 a.m. folks looked up and admired a picture-perfect clear blue sky. The next minute, at 8:43, pure evil struck: a plane loaded with innocent people slammed into a building loaded with innocent people and the scene on that stunning September morning instantly went dark.
For me the nine-year anniversary of 9/11 is bittersweet. I reflect on what I’ve accomplished personally and what’s changed for the better in our country. Then, in the same split second I can’t help but focus on the incredible lack of progress of rebuilding at Ground Zero and the unfortunate lack of progress in securing the United States.

PERMANENT MARKERS
Lakeview resident Deborah Guidry agrees that the five-year anniversary of Katrina will also be marked with lots of reflection and extremely mixed emotions. She lost everything in her cottage on Polk Street. Today, a marking on her new house reminds her “no matter how bad things get, we can always survive.”

When she returned after the storm, Deborah remembers looking at her house and seeing “grayness, then bright orange spray paint.” Someone from the National Guard had drawn a giant orange “X” across plywood that she had put up over her front glass window before she evacuated.

“On the bottom of the ‘X’ was a big ‘O,’ which meant no bodies were found, which made me realize how fortunate I was that I survived, as I was so hesitant to leave. Had I not gotten out of there, I would have been a number at the bottom, instead of zero.”

Today a cast iron replica of the original hurricane marking hangs from the outside of Deborah’s house. “I took a picture of the plywood. I knew I wanted to preserve it; it meant something to me. In rebuilding my new home and life, it’s a symbol of what was.”

She takes a deep breath. “Life stopped and now it has to move into another area, but it will never be the same.”

Deborah passes the marker when she walks up into her house, the front door now nine feet off the ground. “This is what I see. When I look at the ‘X’ it’s a reminder of where we’ve been and where we are going. Life is very short and things change in an instant. In the blink of an eye it’s all different.”

In her daily struggle to move forward, Deborah wants to see positive stories on TV on the five-year anniversary of Katrina. “Let’s showcase the rebuilding, don’t focus on empty lots; focus on houses that have come back bigger and better. Focus on people who chose to come back and build, instead of run.”

KATRINA CLASS 2009
In August 2005, Lindsay Schuckman’s new home was the Sharp dorm at Tulane University. “The day I moved in is literally the day I moved out because of Hurricane Katrina.”

In the weeks that followed, Lindsay and her family watched the devastation in New Orleans nonstop on TV from their home in New Jersey. Her mother telling her, “We better start calling other schools.” I got really mad at my mom. “I’m going back, I’m going back.”

Lindsay, who was 17 at the time, ended up at the University of Maryland. “I was comfortable there, I had friends, but the thought of not coming back to New Orleans, I felt I’d be really missing out—the people, the excitement, there’s always something going on, Mardi Gras, parades. No offense to Maryland, but it is the normal college experience.”

Lindsay returned to Tulane and stayed an extra semester. Graduating with a BA in Finance and an MA in accounting. Now she’s taking the CPA, works at Ernst & Young and lives in New York City five miles from Ground Zero. She was 13 on 9/11, going to school at Jonathan Dayton High School, in Springfield New Jersey, twenty miles from the World Trade Center.

As for the two anniversaries, she says, “It does stir emotion. I think it’s really important to remember every year how many people died in both tragedies. I only think about Katrina and 9/11 when people bring it up. When I am out socializing and someone asks me when and where I went to college, every time I tell people “2005, Tulane,” they say, ‘Ohhhh, the Katrina Class,’ ” and they ask me questions right away.”

Linsday graduated in the Superdome. She recalls guest speaker Ellen DeGeneres saying how grateful the city was for the group coming back. “So many people in my freshman class returned, and it helped Tulane recover. New Orleans is so different. Had I not come back, I would have regretted it forever.”

POWERFUL TV PICTURES
Michael Hill, a North Shore resident, covered Katrina and reported from New York in the aftermath of September 11, writing about the powerful pictures on TV that have become indelible images in our minds.

People waiting to be rescued on rooftops. People jumping from the Twin Towers.

“I’ve talked to a lot of people who can’t stomach any more images of Katrina devastation. I get their pain. But those images are important reminders of the power of nature and the failure of preparedness.”

“I hope the images are broadcast on the fifth anniversary, so they will serve as reminders of both.”

Hill, a Newark, New Jersey, native, says that the terrorist attack “hurt like a dagger.” “I grew up watching the Twin Towers being built, watching them collapse hurt.”

“As painful as the TV images are, I still want to see them on the ninth anniversary because of their relevance. They remind us of what we’re up against, how vigilant we must stay and how much work we have to do to make this a better, safer, more rational world.”

Hill says his dad used to prophetically say in the late ’70s that “terrorism would represent the greatest threat to America.” “My fear,” Hill says, “is it will remain so for some time to come.”

A HAND THAT ALWAYS HELPS
No one understands the threat of terrorism better than someone who was almost killed by it. Veteran New York City Police Detective Sergeant Pete Pannucio received the Metal of Valor for his outstanding personal bravery in rescuing dozens of people on 9/11, as the twin 110-story buildings and surrounding structures, burned, exploded and collapsed in a mind-boggling roar and rumble.

Pannucio got caught in the second collapse and was buried in debris between two fire trucks. “I should have been dead. It’s an absolute miracle I lived through it; it’s evidence to me there is a god.”

Pannucio recalls wrapping up an overnight tour at 8:45 a.m. on the fateful day “when someone told me a plane just hit the World Trade Center.” Pannucio, who had also responded to the 1993 World Trade Center Bombing, jumped in a van with a handful of others and headed to the scene to help.

Years later, his next mission would be heading to New Orleans to help those citizens in their worst moment of crisis. On vacation in late August 2005, he saw the extremely disturbing pictures on television, chaos at the Superdome, people begging for help, people dying on the side of the I-10. “I was completely outraged, so when FEMA gave the okay to the NYPD for a rescue mission, I volunteered along with almost 200 others. We were on the road in less than 24 hours.”

“How could I not go? These people needed help. Listen, the whole country came to help us after 9/11. I felt the need to give back.”

Pannucio drove in a massive caravan of marked units and buses, along with an ammunition truck, a radio communications van and a vehicle repair unit. His group from New York, he says, “rolled into New Orleans like an army.” For weeks Pannucio supervised overnight crews in Westwego and Harahan, running water and supplies. “We did anything we were asked to do.”

Pannucio believes it’s critical for the media to show everything that happened: “the planes hitting the buildings, dead bodies floating in the flooded streets, even if the video is hard to watch, we should never forget, and these anniversaries are a good time to remember.”

“The fact is, people in New York and New Orleans took a huge hit, but at the same time rose from it. I’m honored to have been at the two most historic events in my generation. For me, it’s all about helping people.”

PAINFUL PICTURES
Lately, new friends have been sharing their old Katrina pictures with me, and somewhere packed in a box, I also have reminders of what was. My photographs of the unexpected view out my seventh-floor grad school door room in the East Village, the mighty towers off in the distance. Silver and shining during the day. Black but dotted with white office lights at night. A constant peaceful presence in the city that never sleeps.

Occasionally, I stumble on my smiling NYU Grad School pictures of me, my mom and dad in Washington Square park, the Twin Towers looming large in the background.

In the immediate aftermath of September 11, I was extremely defiant and didn’t want the terrorists to win. So I chose to leave all my New York City skyline and Twin Towers paintings on my walls. Nine years later they are too painful to look at every day.

Somewhere, also tucked away in a box, I still have my sandwich receipt from September 10. I held onto it. I will never throw it away, as it reminds me of a much simpler day.

Robyn Walensky is co-editor of the book Covering Catastrophe: Broadcast Journalists Report 9-11-01. She is a reporter at WGNO-ABC26 and is an adjunct professor teaching Intro to Journalism and Feature Writing at Tulane University.

286
previous Rising With the Sun
next Killer Pad (Thai)