Artists to the Rescue 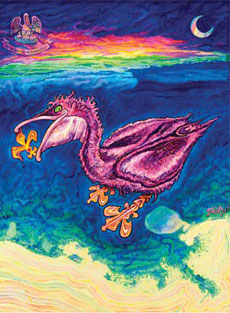 One thing that Hurricane Katrina taught us was that when times get tough, we can count on the people of metropolitan New Orleans to pull together. It’s been five years since the storm, and once again New Orleanians—and indeed, the entire Gulf Coast region—have been hit with a catastrophe. The oil spill has wreaked havoc on the environment and has also deprived thousands of local workers their livelihoods. Once again, the people of the region have joined forces to raise awareness and funds.

The arts community is a visible part of this movement. Local icon and jewelry designer Mignon Faget has already made an impact through her company’s Gulf Coast Collection, a line of jewelry that benefits the Coalition to Restore Coastal Louisiana (CRCL). As soon as the disaster struck, the designer—who also raised more than $120,000 for hurricane relief in 2005 through her fleur-de-lis designs—knew that she had to do something to help. In addition to Mignon’s commitment to the state as a whole, Virginia Saussy, the vice president of sales and marketing at Mignon Faget, explains, “Mignon has always been inspired by the Gulf Coast. The Sea Collection, her very first collection, was [inspired by] shells she picked up along the Gulf Coast.”

In advance of the oil spill, “she’d already designed several pieces, some of which she’d just revived this year in celebration of her 40th anniversary,” Saussy states. After the spill, she redesigned the pieces for the Gulf Coast Collection. “There’s a tradition of mourning jewelry, using black ribbons and black armbands [to signify loss]. It goes way back to the old Creole and Victorian traditions. Mignon had this beautiful idea to take old designs, like the redfish and the speckled trout and the oyster, and place them on black ribbons. She oxidized the oyster dark gray so the piece was a symbol of the sadness that she was feeling.” The pieces are available online (mignonfaget.com), at Mignon Faget galleries and at select Dillard’s locations.

As for the choice of the CRCL, Saussy explains, “Mignon wanted to do something that was local in focus, so we could feel that we were having the greatest impact. We asked people who were experts in the field for their recommendations. We did a lot of research the first week of May, but we chose pretty quickly.” By the time of this interview, in early July, Mignon Faget had already donated more than $20,000 to the CRCL. The project has energized everyone at Mignon Faget, Saussy adds. “It really gives everyone here a great sense of purpose, to be doing that. Everybody’s excited to be part of the effort to make a difference.” As for Faget herself, Saussy says, “the project is ‘typical Mignon.’ There was no way she was going to not do this. She had to do something. She couldn’t just sit there and watch this happening. She had to make her impact on it.”

Lakeview-born artist Thomas Seither, who goes by the nickname Tuna, is also contributing to the relief efforts. The artist, who is best known for his sports paintings, including several Crescent City Classic posters, has named his latest piece “Coastal Paradise.” Both signed and numbered and unsigned prints are available. One of Tuna’s clients, Coastal Shoring conceived the idea and is underwriting the project. As a result, all proceeds will benefit the Lake Pontchartrain Basin Foundation’s Save Our Coast Program.

Central to the piece is Tuna’s “Pel Lis Can.” “I’ve been painting him in one form of another for 13 years now,” he says. “I’d been putting him in some of my paintings in the past when I thought he fit into the piece or the story I was telling, mostly like a second signature. But he had never been the focal point or the sole inhabitant of my paintings like he is in this piece.” His purple and magenta body, “fashioned off of the Louisiana brown pelican,” adds to the symbolic force of the character, Tuna explains. “If you look closely you will see the state of Louisiana formed by the space where his neck meets his back. The crescent moon [joins] his body in his tail to signify the Crescent City’s eternal relevance to Louisiana and to all of us.” The artist first viewed Pel Lis Can as “a symbol of our love for this place” after Hurricane Katrina, and once again sees him as “extremely relevant to a dire situation.” Prints are available at First Bank and Trust locations and online (saveourlake.org/tuna-poster.php).

Gulf Coast residents know that a long and difficult recovery lies ahead. However, as Saussy—who is also a founding member of the Krewe of Muses and one of the Women of the Storm—notes, not just the arts community but the region as a whole has been and remains resilient. “I think what we’ve been through has made us that way,” she says. “Fast to react, and we don’t like to feel useless. We like to feel we’re making a difference.”

214
previous Bounce Is Back
next It's Showtime!