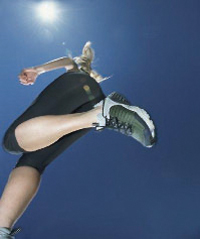 Justin LeDuc, head athletic trainer for Tulane University’s Green Wave football team, laughs when he talks about the maximum heat index temperature for practicing outdoors. LeDuc says the number on the heat index, which factors in actual temperature with relative humidity, is 82 degrees.

“It’s kind of unrealistic in New Orleans,” LeDuc says. “If we followed that, we’d pretty much never practice.” LeDuc does take the heat index into consideration, but unless it’s hitting above105 degrees, the team will be out there running drills. LeDuc and other fitness experts say the same standard applies to the average person. You can continue to exercise outside during the summer months, but here are some rules to follow that will ensure you get in a good workout without endangering yourself.
The first rule for exercising outside during the summer is to avoid the afternoon, which is generally the hottest part of the day. Chuck George, executive director of the New Orleans Track Club, says to workout in the early morning or early evening. George stresses that whatever time of the day you choose to exercise, you should do it with a friend or with a group.
“It builds camaraderie and someone’s there just in case something happens,” George says. Clothing is another aspect of safe hot weather exercising. George points out that those plastic-coated training suits can be “very dangerous.” You might think you’re losing more weight with the additional suffering and sweating, but it’s only water weight loss. You will gain the weight back as soon as you begin replenishing the fluid loss.
Kerrie Ann Frey, a personal trainer and owner of Fit Mom, says to wear loose-fitting clothes with fabric blends that can wick, or pull, away moisture rather than absorbing it like cotton does. There are a number of companies that produce these fabric blends, and Frey says it makes sense to purchase enough of these outfits for every day you exercise.
“If you have a summer cache of clothes, then you can utilize them every summer,” Frey says. While these clothes will make you more comfortable and not soaking wet, keep in mind that the wickedaway sweat needs to be replaced. LeDuc says that water loss during exercise depends on body mass and the type of exercise, but typically he sees about four pounds of water loss per player for one and a half to two hours of practice.
“We try to limit the loss as much as possible,” LeDuc says.
LeDuc weighs players before and after practice—something anyone can do—and if a player loses more than three percent of his body weight during practice, LeDuc will make that player sit down and drink in order to rehydrate. The best way to prevent this kind of fluid loss is to hydrate before, during and after exercise.

Here are some tips from LeDuc to keep your body’s fluid gauge full or close to it:

Drink 20 ounces of water or a sports drink two to three hours before working out.

For intense workouts, drink 10 ounces of fluids every 20 minutes. Drink less for easy to medium workouts.

If you are properly hydrated, your urine’s color should look like lemonade, or clearer. Dark or bright yellow urine may mean you’re not getting enough fluids. Frey says that a general rule of thumb is to drink water to replenish your fluids unless your workouts last more than 90 minutes. After that, you should consume an energy drink like Gatorade or Powerade, which rehydrates and replaces electrolytes, minerals in the blood that are lost during exercise.

Frey thinks that the summer is also a good time to break up your exercise regimen. Instead of forcing yourself to do that same-old five-mile run every other day, break it up with a couple of days of swimming or biking. Plus, when you are acclimating to the increased heat, which usually takes between seven to 14 days, there’s no shame in slowing down and walking.

Getting used to the heat is critical to exercising safely in the hot weather. Until you’re acclimated, don’t push yourself as hard as you normally would, and be aware of the signs of heat exhaustion, which include weakness, nausea and dizziness. If this occurs, get out of the heat immediately—the Tulane football team has air-conditioned tents on the practice field—and start rehydrating.

Just like starting an exercise program, consult your physician before working out in the hot weather if you have any concerns. Frey adds that some people—diabetics, pregnant women and senior citizens—might just be better off indoors during the summer. Other than that, take your time, put on some sunscreen and enjoy the summer, because around here it can last until November.

196
previous 5 steps to healthier habits
next Healthy feet: What you should know about podiatry