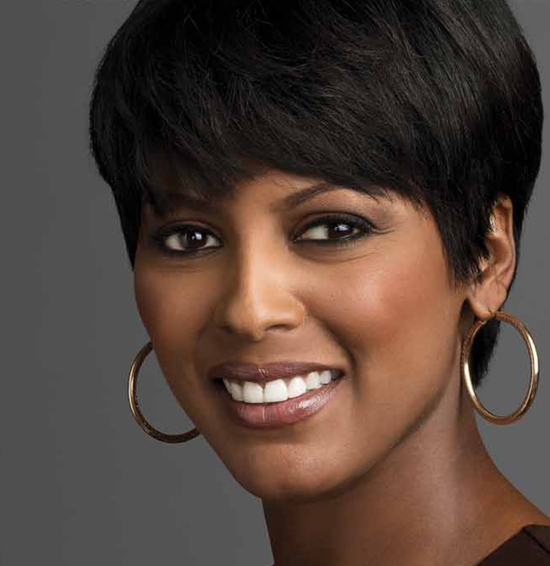 Tamron Hall, the smart, attractive, quick-witted anchor for MSNBC’s popular weekday show NewsNation, strives to bring her viewers the latest and greatest in high-profile interviews and up-to-the-minute world, U.S. and entertainment news. Gutsy, forthright and armed with an unshrinkable quest for compelling stories, Hall demonstrates her passion for the news through her spirited coverage of significant events such as President Obama’s live broadcast from Ground Zero after Osama Bin Laden’s death. She also encourages viewers to get involved and express their thoughts regarding controversial stories via social media during her Gut Check and We Just Thought You Should Know segments.

Hall has hosted several special reports that have garnered both an Emmy nomination and an award. She also received Temple University’s prestigious Lew Klein Alumni in the Media award in 2010. Mesmerized by New Orleans, the native Texan even goes so far as to proclaim that her love for this city rivals her love for her home.

Good morning, Tamron. Since we’re both southern girls, let’s just take a poll to see whose mom called the most this morning before this interview began.

OK, you win by two phone calls and a text.

My mom and I are thick as thieves; we’re best friends but a Southern mom is going to discipline you. You get the best of both worlds. …She’s there to offer support when I’m uncertain about things and give advice on the substantive things. But if she doesn’t like my lipstick or my dress, she is going to let me know.

You cover a great mix of news, from world events to entertainment. With any topic, what is it that really interests you about a story?

Whether it’s a story of tragedy or of hope, the common thread is it’s about people. I love learning about others and hearing about their journeys and how they made news. Today, for example, there’s a weather development in Alabama, but really the story is about how the weather affects people and that’s what drew me to the news.

I was a five-year-old kid in Luling, Texas, who’d go visit my grandfather’s neighbor, Mamma Susie, who was around 100 years old. I would sit there and braid her hair and talk with her in her tiny shotgun house when the other kids were out playing jacks, and it was the best time of my life.

You brought up entertainment; Heidi Klum and Seal announced their separation and people were responding to these two people we’ll never meet, but it still hits you because this couple has children and you think about your family or someone you know. I think we gravitate towards an entertainment story like that because of that common thread, and even those with glamorous lives still have the same struggles that many married couples have.

Yes, and when you speak about a tragedy, the first instinct is to help and that’s the common thread because we all know it could be us. You may not instantly say, “Oh, that could be me!” but I promise you will within a few hours of the flooding images. You ask, “How could Katrina happen and how can we make sure this never happens again?” That’s how news is. We don’t do this for the rubbernecking aspect; we want you to see the story and have it affect and inform you.

How timely was it to have scored an interview with then-Senator Barrack Obama shortly before he announced his run for president when you were still at WFLD in Chicago?

Oh, it was a big accomplishment and I had interviewed him many times before; he was in Chicago and had run for a state office and lost. There were these big rumors of him wanting to run for senate and he won and of course from there he took off for his next move. We had an opportunity to interview him right before he made the announcement that he’d be running for office, so the timing was fantastic and I was fortunate enough to be there in Chicago at that time.

I use Twitter all the time; it gives great insight into what people are thinking and saying. I like the immediacy and brevity of Twitter and I also go on Facebook several times a day. The unrest in Iran was a complete shut out of the media and that was the moment in time when so many people realized the value of Twitter to the process of collecting information to report. Were it not for Twitter, we wouldn’t have seen those images. It was a reminder that you can get powerful information without waiting for the paper the next day.

You are outspoken about causes near and dear to you, and you have been recognized by Day One, a New York-based advocacy group for victims of domestic violence for your work and support of their efforts.

My sister was involved in a marriage filled with violence and she was murdered in her home. While no one was ever charged, the police named her then-husband as a person of interest. Just from my experience and learning so much about domestic abuse with young people, especially middle school to high school age, and given that I’ve been blessed with a platform of being on the news where we can bring such subjects to life, well, I don’t want to say it was a natural progression; I wasn’t sure that I wanted to talk about my family’s struggle, but if through it somehow I could help, that was the goal.

On a lighter note, is it true that you’re such a big fan of New Orleans, you can advise the locals about great places to go?

I love New Orleans. I visit a couple of times a year and it’s like a pilgrimage for me. Without New Orleans I wouldn’t be me and I know that sounds strange as a Texan but it rivals my love for Texas.

That’s so cool. Well, some of your favorite people are here …

Yes, [I] like Ruth Bodenheimer who runs the Lanaux Mansion. I met her when I was in New Orleans doing some pieces on Katrina. Hoda Kotb actually told me I had to go to Irene’s, so I went there early because I was by myself and didn’t want to look like the lonely-hearts club. Irene and her staff were so fantastic I went there the next night. It’s so delicious and has such a romantic atmosphere and Irene said, “I want you to meet Ruth.” She was so charming and eats there every night alone because her husband passed away, so I sat down with her and we talked politics, life and love and she’s just one of my favorite people. With people in New Orleans, I just can’t define it. I ran track in school so we went to Louisiana a lot, but when I went to New Orleans as an adult, I just felt like I was at home. It was this weird feeling of peace and it was provided by the people of New Orleans.

So what are some other favorite New Orleans haunts of yours?

I love, love, love that Haydel’s Bakery; that is the best king cake. MiLa is a beautiful, special-occasion place. Oh God, Stella! is another fantastic special-occasion place. I love that juicy burger and that baked potato at Port of Call. I just love that, in New Orleans, you can just as easily go down home with your jeans on and get down, or you can go upscale. People had this notion after Katrina that New Orleans would never be the same, and there were awful words like “You should take everyone out of there!” but the mending has been incredible, especially in the restaurant world. I went to New Orleans right after Katrina to work and I’d go to a restaurant and order something simple like eggs and there would be none. I remember when people put up all the Post-it notes in front of Camellia Grill and now I lovingly wait in that line in 90° humidity for that chili omelet and a milkshake. It’s like Heaven to me.

You’re admired for your style, Tamron, and some of that style is gleaned from your shopping expeditions in New Orleans.

Yes. Victoria’s on Magazine is one of the best boutiques in the country. The owner, Paula, has the best taste and the best sales. Whenever I wear something from Victoria’s, I am bombarded with emails from viewers asking about the item. I recently wore a coat on TODAY and I felt bad because it was the last one in the store and I had snapped it up, and so many people asked me about that coat.

You love dogs. You’ve got a couple of dogs and you’ve even been a co-host at the Westminster Dog Show.

Yes, I was a co-host for Westminster a few times. I have a Chihuahua and a Maltese and they are pretty funny; one is pretty mean and the other is pretty laid back. I always want to bring them to New Orleans with me but since I’m never in my hotel room for more than a second, I don’t bring them, but I’m sure they would have a good time as well. …A few years ago at a wedding the couple had their beagle as the ring bearer and it was the cutest thing I’d ever seen. I thought if I ever get married—which it would be in New Orleans—I’d have to have my wedding there so the dogs could participate.

So you’d even have your wedding in New Orleans.

Which will probably never happen [laughs]. Watch, one day I’ll get married in New Orleans and my cake would be made of cake balls because I love the cake balls made by Stephanie Bernard, the pastry chef at Dickie Brennan’s Steakhouse. My producer Jennifer Llamas, a New Orleans native, got me addicted to [them]. She had the cayenne and the red velvet flavors, and I’m like, “There you go, that’s my wedding cake.”

Are there a lot of New Orleans connections at MSNBC?

Yes, it’s amazing. Melissa [Harris-Perry] just got her own show. Courtney Hazlett, the celebrity correspondent, attended Tulane. When the Saints play, good lord! In fact, the other day I had on a gold shirt and a black skirt and Jennifer said, “Oh, you have on the Saints’ colors today,” and I’m like, “No, that’s not what I planned.” [Laughs]. She even put it on Facebook. You New Orleans folks—you see that color combo and you can only think of one thing.

I’m thinking you may have planned that subconsciously.

[Laughs]. There’s a line in the sand and it is drawn. I know I’m supposed to have unconditional love for New Orleans and I do, but I’ll be a Cowboys fan ‘til the day I die.