A quick decision with a vast ripple effect 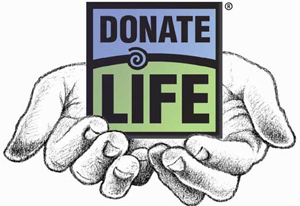 Most 16-year-olds are asked whether they want to become a donor when applying for a driver’s license. These teens probably responded yes or no in a spontaneous, on-the-spot decision, and then forgot about all it.

As a result, the public isn’t always aware of the enormous impact this decision can have on the lives of others. The Legacy Donor Foundation aims to widen awareness of the positive consequences of this life-changing decision. It provides education and public awareness activities about organ donation, with the goal of increasing donor registrations and fostering informed family acceptance of the process.

An organ donor can potentially save the lives of nine people, said Juliette Thompson, Executive Director of the Legacy Donor Foundation. This means that just signing the back of your driver’s license could help nine other people leave legacies of their own. As opposed to so many diseases for which there is no cure, organ donation is the cure for those needing transplants.

However, common misperceptions about organ donation persist, and these are often the reason for the apprehension people feel about becoming a donor. Among the most common is the idea that if a doctor sees that you are a donor, he or she will not save your life. In fact, this is a direct violation of the Hippocratic Oath, which all doctors take. A patient must be declared brain dead before organs or tissues can be recovered, and determining whether a patient is brain dead requires extensive testing.

Another misconception is that celebrities and the wealthy have priority when they need an organ or tissue transplant. Thompson clarified that organ donation is based on need; the patient that comes up next on the transplant list is whoever is the sickest and is a match for the organ being donated.

In the state of Louisiana, 30 minutes of driver’s education training is dedicated to organ donor registration awareness. The Legacy Donor Foundation is producing a video field trip and an interactive online game that target youth, and will soon become part of Driver’s Ed curriculum. The video game, named Scalpel Pal, teaches about transplantation and all aspects of becoming an organ donor.

The Wide Reach of Tissue Donation

Transplantation of the body’s tissues—bone, skin, corneas, tendons, ligaments, cartilage, arteries, veins and heart valves—allows for truly amazing changes in the lives of others. Tissue donation from one person can restore sight to two people, and enhance the lives of 50. Thompson told me about an 11-year-old boy with bone cancer who was in danger of losing his leg, but thanks to a tissue transplant, is now a healthy 15-year-old and an avid golfer.

In the movies, a scrubs-clad actor rushes through a hospital with a vital organ in a cooler, dry ice fumes seeping out its sides. While organ transplantation is very time-sensitive, tissue transplantation is not. Thompson relayed the story of a man who had been blind for over 30 years, during which time he’d fathered three children. A corneal transplant allowed him to wake up from surgery looking into the faces of his children for the very first time. Imagine giving such a gift.

792
previous Texting Down Diabetes
next Around Town: Fitness