The apartment was bought sight unseen. Condos in the Andrew Jackson—in the Garden District, with parade route, off-street parking, 24/7 security, and a deck with a 360-degree view of the city—rarely go on the market. And neither did mine.

Living in New York, I was headed to India on assignment when a friend e-mailed me about the condominium. The seller was strolling through Stein Mart when I called. The deal took less than an hour. Floor plans were faxed to Jaipur.

The movers were stuck in a nor’easter at act of sale. Papers signed, keys in hand, I did what any journalist on deadline would do. I went to Office Depot bought a printer, step ladder and set up office in my new digs.

Friends—I am blessed with many of great taste—dropped by. One brought a folding TV tray, another Riedel stemware and wine. All had advice. Topmost, the blue paint throughout had to go. Actually, I thought it a seamless transition from apartment to the clouds, plus I like Virgin Mary Blue!

I was dazzled by sunlight pouring through floor-to-ceiling windows in my fifth floor aerie. (Light, much less views of magnolias in bloom, is hard to come by in Manhattan, even on the Upper East Side.)

As in the past, I called decorator Mary Ferry Bigelow, whose touch with color is akin to the great Donald Kaufman. My vision was sophisticated New York meets New Orleans, with mirrors, brushed aluminum, glass and chrome. Or Rajasthan royal tent, with layer upon layer of textiles and carpets.

Bigelow knows I have decorating ADD. Endlessly pushing furniture, collecting at every place I travel, I have no patience or plan. Things just evolve. She knew that if she waited, I’d change 10 times before a coat of paint went on the walls.

Ginja Moseley brought an “inspiration book” for fabric swatches, paint smudges and pictures from the ridiculous number of decorating and travel books yet to arrive. To this day, I carry it … to Italy, India or Fabrixx. You never know where inspiration might strike.

The furniture arrived in disrepair and much unsuitable for a New Orleans lifestyle. The dining table was too small; 200 volumes had no bookcases; Manhattan colors didn’t work in saturated sunshine. Like a wrecked car, repaired furniture is serviceable but you know it’s been wrecked. Out it went to the Heirloom and Renaissance consignment shops.

Blue walls turned Pumpkin Seed to complement Japanese scrolls I had bought from Adriaan’s Antiques here and taken to New York but never unfurled due to their fragile nature. They now float in museum glass frames created by Deville Framing, flanked by mirrors, installed by Standard Glass to look like doors, that dominated the dining area. Did it matter that I had no real dining table? It did not.

Barbara Aalders worked wizardry on 40 panels of Indian hand-blocked curtains and several saris to attain the “Raj tent” look across one wall in the living room. Bigelow found Stark Carpets for the rooms. And Al Butler’s crew reframed doors, added closets, installed molding, constructed bookcases and upgraded the kitchen during Mardi Gras as the parades passed below. 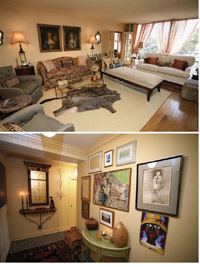 Artist Mario Villa stepped in and found a comfy sofa, brass and marble end tables and several pairs of lamps, which we took to Shades of Light for shades. One day Mario called breathlessly: “Meet me at Tara Shaw, now! I have found your dining table.” The French refectory table opening to seat 10, closing for six—a table I had dreamed about for years—was in my home that evening!

Neal and New Orleans Auctions yielded French provincial dining chairs, a chaise and Italian console. Bigelow and I found an octagonal coffee table in St. Francisville and hauled it home. Months later it would be gone, a glass-and-brass one in its place. It sits in front of a camelback sofa, which has been around for years, near two Edwardian library chairs purchased at an estate sale on Garden Lane. Two Sister Parrish slipper chairs were slip-covered in gray silk.

I have long collected New Orleans artists: George Dureau, Grover Mouton, Tim Trapolin, Henry Casselli, and my brother Michael, an art photographer. Today, a Jonathan Ferrera, Steve Martin and Arthur Roger have been added. Into this mix are six much-loved ancestral paintings that dominated my Manhattan apartment, antique handcolored botanicals, travel photographs, plus objects as diverse as baskets from Botswana and leaf-thin Burmese

lacquered cups to a South African wildebeest pelt. How to make all this work in an open-plan apartment? It was hard abandoning the idea of keeping a small second bedroom solely for guests, but you don’t mess with decorating maven Gerrie Bremmerman. As I recall, she convinced me—in two sentences and one question—to get the computer out of the living room and use space in an extra closet for office supplies.

The contemporary art went into the foyer, the family portraits in the living room and office. Mirrors were installed between bookcases, around a concrete pillar, inside panes of French doors. By day they form optical illusions opening the space; at night they reflect candlelight and lamplight.

In the office/guestroom, a telescoping desk from Pier One opens for work, closes for guests. A settee converts to a bed. Above it is a family portrait and mounted boxes holding the lacquer cups and statues of the Hindu god Ganesh. The number of architectural photographs from trips grows.

The bedroom is a feminine folly with a view of a twinkling Crescent City Connection at night. A vintage dressing table sits between windows dressed in salmon silk and mattress ticking. Matching bedside tables flank a raised bed whose headboard is slip-covered, for the season, in red toile with matching duvet. The botanicals found a home here among books, crystal perfume bottles and a chair, handcarried, from Venice.

How long it will look like this is anyone guess. Upstairs, a storage closet bulges with photos, prints and mementos; under my bed, textiles folded in acid-free tissue are stored in boxes. On any given day, upholstery could be slipcovered, carpets rolled up and who knows ….