An Uptown cottage is as stylish and unpredictable as its fashionable, upbeat owner 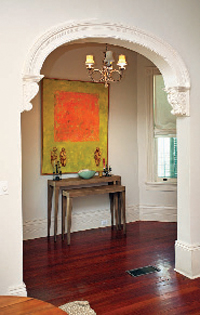 When Sarah Winston walked into the shotgun cottage with a “For Sale” sign out front, she saw potential where most people saw a jumble of small rooms laid end to end. The Uptown cottage had low ceilings but a high roofline, wide plank floors, three bedrooms and double-sash windows. Its most redeeming feature was a graceful archway between an entrance hall and the rest of the house.

“I loved that arch so much I bought the house,” said Winston, who has a visionary streak clear enough to take her boutique, Shoefty, on Magazine Street, from women’s shoe store to total wardrobe center for gals and guys, with a soon-to-open vintage division, in five short years. “I saw this as an open, light and airy house that was very grounded,” she explained. “So I hired a guy—let’s just call him Cowboy— and, with the exception of the archway and a vintage bathroom with an iron claw-foot tub, we knocked down every wall and ceiling.”

Post-renovation, the ceilings soar to more than 14 feet. Light pours in from windows. Walls are, for the most part, painted white. The furnishings, art and heirlooms add lively punches of color. Floors shine with the patina of years of polish and wear.

The house—a little Manhattan, a little East Hampton and a lot contemporary New Orleans—suits Winston, who was born and raised in New York. She mixes family treasures, antiques and solid pieces of furniture that can withstand a large dog, a cat and pals who plop their feet on sofas with aplomb. The house is at once quirky and elegant; filled with tchotchkes, yet looking spare.

The large living and dining room is bisected by an odd diagonal 1930’s brick chimney. The mantelpiece is the perfect perch for a fish bowl, a trio of turquoise vases and a branch of white coral sunk into Lucite, one of several beloved gifts from her grandmother. (This last piece is so fragile she carried it by hand on a flight from New York.)

“Most of the furniture and art came from places in New Orleans. I love mid-century modern and antiques. And they are so easy to find here. Also, I feel very strongly about supporting New Orleans merchants,” explains Winston, a petite brunette with the ability to place Philippe Stark’s Ghost Chairs (in black) around an antique oak table from Tara Shaw; then flank the table and chairs with a Swedish tall clock from Karla Katz and a ship’s transom from U Dwell … and make it work. 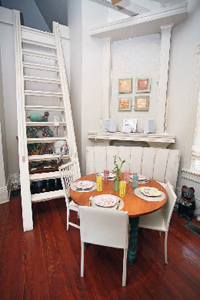 On the other side of the chimney divide, the living room is anchored with a sectional sofa covered in a dog-cat-party-proof, poison-apple chenille from Villa Vici. A large, sweeping, weeping chrome floor lamp from Design Within Reach sheds light on the sofas. A Plexiglas coffee table, from Perch, is faced by a horn and cowhide ranch chair from John Spradlin, and, a 1960’s side chair covered in pussycat-pink velvet found at Neophobia. A cowhide pelt is tossed on the floor. On one wall is the ne plus ultra accoutrement of modern living: a large flat-screen TV perfectly balanced with artwork of watery images. Many of her paintings are from the Soren Christensen Gallery on Julia Street, others are painted by friends, one, by co-worker Michael Mott, is a bold, colorful portrait of Winston as a blonde.
In the kitchen, countertops are made of poured-in-place concrete; the cabinetry is painted a graphite-gray; and a large fish tank sits atop a work area.

In a corner is an Ultrasuede-covered curved banquette, also from Villa Vici. It and two nonmatching chairs sit in front of a country table with painted-green legs, a gift from her father. A primed, waiting-for-paint buffet serves as a bar and altar of sorts. A door leads to a small sundeck, another to the vintage bathroom, and near the banquette, a tall ladder leads up to a loft space carved out of a formerly bare attic.
Like in many shotgun houses, one walks through the kitchen to reach Winston’s large blackout-curtain-lined bedroom. And that bedroom leads to a large bathroom, which leads to another bedroom. “Okay, I could have left them as bedrooms,” says Winston, “but where was I going to put all my stuff?” (Meaning shoes, clothes, accessories). This is the kind of woman who understands the luxury of space. So, she lost two bedrooms in exchange for a luxurious bathroom upgrade and the huge bedroom-size dressing room lined with racks, cabinets and endless storage for her “stuff.”

The house, like the owner, has myriad surprises. Near a delicate Swedish bench in the bedroom sits a Burmese temple figure, art magazines stacked in ways that resemble tables, in the kitchen a long, wooden trough can be filled with flowers, herbs or votive candles, a seemingly decorative set of
shuttered doors high above the oven actually work as ventilation and access to the attic, and in the living room the remains of a bull’s head hangs Picasso-like over a fine painting.

One senses that the decor is ever-changing, yet the mood remains the same. Fine antiques, yes. But masses of silk damask, no. There is always room for more art, shoes and the occasional Chinese “good luck” cat figurine. This is an upbeat, edgy home of a bright young woman who is far too whimsical and sensible to let herself get bogged down in too much “Louis this, Grand that.” And being in the fashion business, one has to be somewhat mercurial.