Let the spirit of New Orleans warm your soul on the perfect holiday weekend. 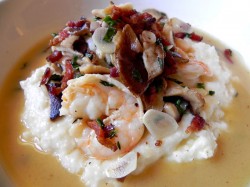 Last-minute shopping at: During the entire month of December, participating shops will celebrate Merriment on Magazine. Stores will feature extended hours, holiday decorations, and special sales and events. With more than two miles of unique retail establishments, not only will you find the perfect gifts for the ones you love, but you’ll also be supporting local businesses and helping the New Orleans’ economy thrive.

Sip at: With 24 revolving taps and plenty of top-shelf liquor, Rendezvous Tavern is a great Magazine Street bar (on the corner of Eighth Street) where you can kick back and clink bottles (or glasses!) to another wonderful holiday season. During happy hour, you’ll find two-for-one well drinks and a 50-cent discount on all beer. Relax among a mixed crowd of patrons of all age levels; sing along to songs on the well stocked Internet jukebox; or play a few rounds of pool at this popular hangout.

Revive at: You can expect nothing but the best when a trio of police officers (now retired from the New Orleans Police Department) opens a donut shop. Dennis Gibliant, Ronald Laporte and Brandon Singleton joined forces to open Blue Dot Donuts on Canal Street in Mid-City two years ago, and they’ve been selling out ever since. Stop into this sweet tooth-lover’s dream, and indulge in a hot cup of locally roasted coffee paired with an assortment of round delights. Be sure to try a blueberry glazed cake donut, a chocolate éclair filled with Bavarian cream or one of their specialties—a peanut butter and jelly donut.

Illuminate the holidays at: For more than a quarter of a century, locals have celebrated the holidays in New Orleans City Park at Celebration in the Oaks. One of the most spectacular light festivals in the nation, the event attracts more than 165,000 visitors every year to see the park’s magnificent, sprawling oak trees draped in sparkling white lights. Enjoy rides on the train; whirls on the carousel; or just wander around among a forest of dazzling lights while sipping a cup of creamy hot chocolate.

Brunch at: On the corner of Jackson Square in the historic French Quarter lies one of Chef Scott Boswell’s famed restaurants, dubbed Stanley. Named after one of the main characters in A Streetcar Named Desire, the famous play by Tennessee Williams, Stanley serves breakfast all day long in a soda shop-themed atmosphere with checkered-tile floors and a large marble bar with wooden stools. Watch the artists and musicians in Jackson Square while devouring dishes like Bananas Foster French toast with house-made Tahitian-vanilla ice cream or the Breaux Bridge benedict with Charlie T’s Specialty Meats’ boudin, smoked ham and Creole hollandaise sauce.

Adulate at: Let the music of the season lift you up to the heavens as the St. Louis Cathedral Basilica Concert Choir & Orchestra presents its annual Christmas concert on Sunday, Dec. 22. Soloists, the choir and the orchestra will perform Handel’s “Dixit Dominus” and Vivaldi’s “Magnificat,” and, like all things truly wondrous, the event is free and open to the public.

Celebrate réveillon at: A long-held tradition, réveillon in New Orleans offers local restaurants an opportunity to present decadent, prix fixe menus with rich, historically inspired dishes during the holiday season. Recently reopened, Broussard’s Restaurant is one of many eateries in the city featuring a réveillon menu this year, and Executive Chef Guy Reinbolt’s mouth-watering creations are sure to make you merry. Indulge in dishes like Louisiana rabbit rillettes with marsala fig marmalade or oven-baked pheasant with mushroom risotto and mirliton ragout.

158
previous Festive Feast
next LiveWell: In the Kitchen