Being in the Crescent City, inhaling its culture and history, can be a romantic adventure made just for two — but here are a few suggestions, just in case 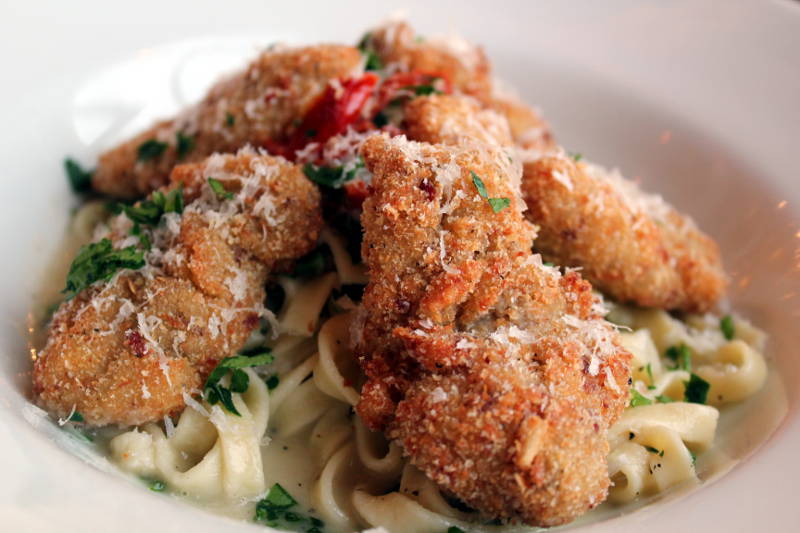 Lunch at: Surprise your other half with lunch at Emeril’s Delmonico, famed Chef Emeril Lagasse’s re-invigoration of the 1895 classic. Surrounded in elegance, from the linen-covered tables to the intensely attentive wait staff, your senses will reel after tasting the dishes created by Chef de Cuisine Anthony Scanio. Pick your delights from the a la carte menu or choose the three-course prix fixe, featuring dishes like Fried Oysters Bordelaise with house-made spaghetti, shaved Parmesan and oven-dried tomatoes or Coconut Cream Pie with lime meringue and grilled pineapple in a cashew crust drizzled with rum caramel sauce. 1300 St. Charles Ave., 504-525-4937, emerilsrestaurants.com

Sip at: Right after work (or a leisurely Friday lunch), be seduced by the past with craft cocktails at Bellocq, located inside the Hotel Modern at Lee Circle. This sexy, sleek, darkly lit bar with antique furniture is a delicious homage to New Orleans photographer E.J. Bellocq, a professional famous for his erotic photographs of Storyville brothel ladies. Co-owners Neal Bodenheimer, Kirk Estopinal and Matthew Kohnke, who are also owners of the highly successful Freret Street bar Cure, have gone the extra mile by offering fortified wines, absinthe, liqueurs, and, most notably, cobblers and punch. Sit close upon the chaise, fingers intertwined, and sip on a La Vida Buena concocted with house-made blueberry rum, fresh lime and tea or a Fall Cobbler with Amontillado Sherry and roasted-pecan syrup. 936 St. Charles Ave., 504-962-0900, thehotelmodern.com/bellocq

Embrace the music at: One of the oldest structures at Lee Circle (if not the oldest) is the unique, rust-red building that is home to the Circle Bar. Extremely intimate, especially when the music starts to play, the Circle Bar is one of the most popular live music venues in New Orleans. The bar has played host to both local and national performers from the Happy Talk Band, King Louie and Rotary Downs to Floating Action, Free Energy and Kishi Bashi. The only difficulty is squeezing your way in to sit at the bar or stand near the band — just dance close, and the night will move with you. 1032 St. Charles Ave., 504-588-2616, circlebarneworleans.com

Revive at: Spend a lazy morning (or early afternoon) enjoying expertly brewed coffee sourced from local roasters at Royal Blend Coffee & Tea. This French Quarter coffeehouse features a quiet, dreamy courtyard in which to relax and revive with a frothy cappuccino and a croissant. The cafe also offers a large array of blends (both coffee and tea, of course!), sold by the pound, half pound and quarter pound, so be sure to pick up some to go. 621 Royal St., 504-523-2716, royalblendcoffee.com

Dine at: Chefs John Folse and Rick Tromanto have spared no expense to offer the ultimate in luxury dining in New Orleans. Their combined efforts resulted in Restaurant R’evolution, an ornamented and genteel dining experience in the historic French Quarter. Dubbed as a “swanky” spot that aims to “push the boundaries and expectations of dining in Louisiana,” Restaurant R’evolution features several different dining rooms, hand-painted murals of a rural Louisiana from long ago, antique chandeliers, a massive wine list/cellar and, of course, a stunning menu. The Bienville Street restaurant offers dishes like Espresso-Crusted Venison Carpaccio and Crawfish-Stuffed Redfish Napoleon. If the purse chairs don’t impress your significant other, the Molten Chocolate Soufflé with white chocolate peppermint ice cream certainly will. 777 Bienville St., 504-553-2277, revolutionnola.com

Be a guest at: Revel in the romantic tale of Disney’s “Beauty and the Beast” at the newly renovated Saenger Theatre. Watch the fate of Belle unfold as she offers her life to save her father’s in the classic tale of self-sacrifice and love — all taking place in one of New Orleans’ finest theaters, the Saenger, a landmark movie house built in the late 1920s and brought back, quite recently, to its former glory. Disney’s “Beauty and the Beast” is a smash-hit, Broadway musical romance that has won the hearts of more than 35 million people worldwide, filled with dazzling production numbers, lavish sets and costumes, and songs that you’ll remember long after the curtain goes down. 1111 Canal St., 504-525-1052, saengernola.com

Brunch at: Watch the traffic of Canal Street flow by from the huge, second-story windows at the Palace Café. Local celebrity Dickie Brennan’s flagship restaurant — located in a historic New Orleans landmark building (that used to house the Werlein’s music store) — has won both local and national awards since its opening in 1991. Chef de Cuisine Brandon Muetzel will set your taste buds dancing to the tune of a creamy Crabmeat Cheesecake, baked in a pecan crust with a Creole meunière, or Eggs in a Nest, with house-baked brioche nestled around two shirred eggs and topped with smoked catfish, crème fraîche and caviar. 605 Canal St., 504-523-1661, palacecafe.com

Take a walk at: Watch the river traffic chug by as you stroll along the Mississippi River from the Audubon Aquarium of the Americas through the green spaces of Woldenberg Park. The park was named after Malcom Woldenberg, a philanthropist and leader of the Jewish community in New Orleans, who contributed to the park’s construction. Created in the late 1980s, what were once old warehouses and wharves are now well-manicured green spaces with fountains and sculptures. While walking hand-in-hand with your loved one, don’t be surprised if you meet a lone street musician playing sax or guitar, serenading the river as it hurries by.

Snack at: Settle in for a sweet treat at La Divina Gelateria, located right behind the Cabildo in Jackson Square. Jump right in to their artisan gelato, created in the traditional way using organic and local ingredients, like farm-fresh creams, fruits and honey. Other sweet offerings include pastries, pies and cookies — all of which pair well with a foamy cappuccino, latte or macchiato brewed from locally roasted beans. If you’re hungry after all that walking, and would rather skip dessert, you can try a Porchetta Panino with slow-roasted pork loin or a Grilled Cheese & Bacon panini with pancetta, ripe tomatoes and fresh mozzarella. Be sure to keep your body fueled; after all, you two have the whole night ahead of you … 621 St. Peter St., 504-302-2692, ladivinagelateria.com